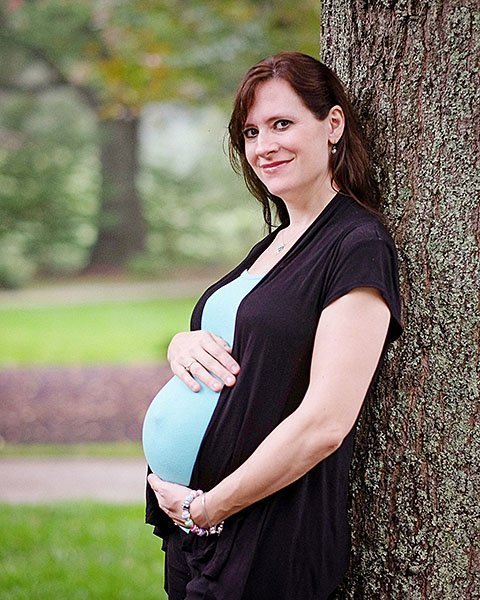 Donielle Wilde, of Greensboro, N.C., poses for a photo Oct. 1, while pregnant with her 10th child. Wilde recently discovered her breast cancer has metastasized to her ovaries but has opted not to have cancer treatment until after the baby is born. She and her husband, Keith, said they are relying on their Catholic faith to see them through her health struggles.

GREENSBORO, N.C. (CNS) — Keith and Donielle Wilde know what it means to live this every day: "Jesus, I trust in you."

Married for 17 years, the Catholic parents of nine children under the age of 12 and the owners of a concrete business in Summerfield rely heavily on their faith in Christ and the church.

But shortly after Donielle became pregnant with her 10th child in April, doctors found that her breast cancer, which had been in remission for the past nine years, had returned — and their faith was put to the test again.

"The beginning of this year was extremely difficult for Keith and me," Donielle recalled. "The business, financial stressors, and 11 of us living under the same roof had us both feeling maxed out. In our minds, we were sure that God had given us all that we could handle.

"However, God would soon reveal that he had other plans. Since we were using NFP (natural family planning), we were more than a little surprised to find out we were pregnant with our 10th child," she told the Catholic News Herald, newspaper of the Charlotte Diocese.

After sharing the feelings of joy and excitement, the couple "began to wonder how God could think we were able to handle more. But he never let us down before," Donielle said.

So they prepared to welcome their 10th child, a fifth daughter.

But when Donielle went to her OB-GYN for a routine ultrasound nine weeks into her pregnancy, life took another unexpected turn. The ultrasound revealed a large mass on one of her ovaries.

The tumor was cancerous. At 16 weeks safely into her pregnancy, Donielle underwent surgery to remove it.

"With God’s grace, we never lost our peace in spite of all that was happening," she said. "In fact, our faith grew stronger and our hope for a healthy pregnancy and delivery was in the forefront of our prayers, as well as all those praying for us."

Tests revealed that the tumor was not ovarian cancer, but Stage IV breast cancer that had metastasized. The breast cancer she had successfully fought in 2005 had returned, and doctors told her the hormones produced by her pregnancy were speeding its growth.

Both the ovarian specialist and the oncologist strongly advised Donielle to begin treatment immediately. She had two options: abort their unborn daughter, then undergo surgery and chemotherapy, or undergo aggressive chemotherapy throughout her pregnancy and risk a possible miscarriage.

"It felt as if the moment was frozen in time," Donielle said. "Looking back, it was as if we were in the midst of a spiritual battlefield, and the forces of good and evil were intently watching to see what our choice would be … but in reality there was no hesitation in making our decision. We would not abort our child or place her in harm’s way for any reason."

Keith recalled the day they met with the oncologist and received the diagnosis.

"As a father, it is very strange to sit across from someone, at arm’s length, and listen to that person tell you to kill your child," he said. "I know that is a very blunt description of what took place — but it is also accurate. I realized that he did not see it that way. The doctor is a good man, kind, a father. He is a competent professional and very dedicated to doing all he can to save Donielle’s life.

"But he simply did not see the child in her womb as a person. The pregnancy was a condition to be dealt with so that Donielle’s treatment could begin."

But he said he and his wife never wavered on their decision.

"We calmly accepted the news, and calmly refused the abortion," Keith added. The couple decided to postpone treatment for Donielle’s cancer until after their daughter is born.

She was to have a C-section in early November, four weeks before her due date, which will be "followed by the start of any suggested cancer treatments," Donielle said. "Further treatment will be determined upon results of testing after she is born."

Dr. Lewis Lipscomb Jr. is a pro-life OB-GYN who is caring for Donielle and the couple’s unborn baby, and he has dealt with life-threatening situations like this before.

"I have cared for courageous moms who have fought through cancer during their pregnancies — including women with breast cancer, melanoma, lymphoma, cervical cancer and uterine cancer," Lipscomb said.

Despite some medical complications, Donielle "is doing very well," he said, and the baby is developing normally.

"Donielle is a courageous and prayerful woman," Lipscomb said. "She has faced multiple life-threatening and life-changing situations with genuine grace. She is an authentic witness for life to everyone she encounters."

Said Donielle, "We feel very hopeful that our little girl will be healthy and strong. We’ve accepted in our hearts whatever it is God has willed for my life. Whether it be healing from cancer, strength in suffering or a peaceful death, my heart remains at peace knowing Christ and our Blessed Mother will give my family and me all the grace we need to live it out."

As Catholics, "our decision not to abort and to postpone treatment was rooted in our faith," Keith said. "We are pro-life by virtue of our Christianity. We have placed God at the center of our marriage, and he has blessed us profoundly. Now he has given us a cross to bear — who are we to say no?"

Donielle said the couple’s nine children and the 10th on the way are "a constant reminder to me of God’s love."

For her, being Catholic is more than speaking words or reading books but "is how we are called to live our lives," she added.

Catholics must "go forth and live the Gospel, do works in faith striving to imitate Christ," Donielle said, and to consider "what is God is asking of me, personally, to better live out the Gospels? Whatever the answer may be, I ask you to fearlessly give God your ‘fiat,’ your ‘yes.’"

Howell is senior reporter at the Catholic News Herald, newspaper of the Diocese of Charlotte.