Prelates: It's time to heal wounds and build a pro-life culture - Catholic Courier 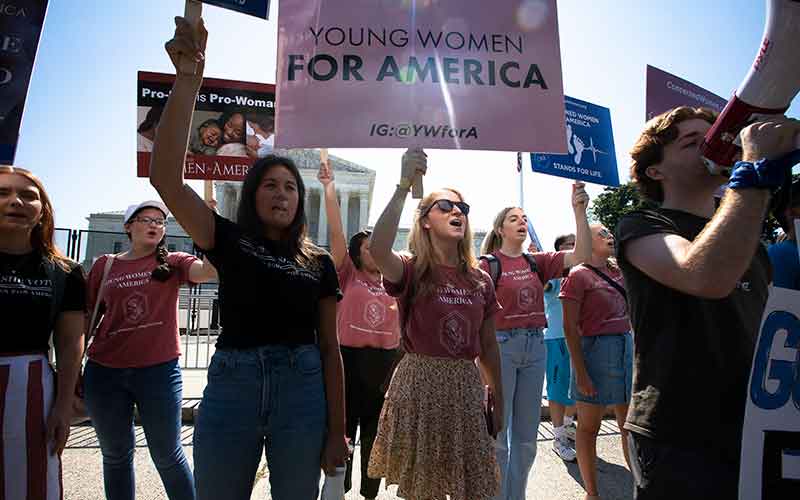 Pro-life demonstrators are seen near the Supreme Court in Washington June 15, 2022. The court overruled the landmark Roe v. Wade abortion decision in its ruling in the Dobbs case on a Mississippi law banning most abortions after 15 weeks June 24. (CNS photo by Tyler Orsburn)

WASHINGTON (CNS) — Two leaders of the U.S. Conference of Catholic Bishops hailed the Supreme Court’s June 24 decision to overturn the court’s 1973 ruling that legalized abortion nationwide and said it is time for “healing wounds and repairing social divisions” with those who take opposing views on abortion.

The ruling marks a historic day for the United States after almost five decades during which “America has enforced an unjust law that has permitted some to decide whether others can live or die,” said Archbishop José H. Gomez of Los Angeles and Archbishop William E. Lori of Baltimore.

The prelates issued a joint statement as USCCB president and chairman of the bishops’ Committee on Pro-Life Activities, respectively.

The ruling to overturn Roe came in the court’s decision in Dobbs v. Jackson Women’s Health Organization, which was a challenge to a Mississippi law banning most abortions after 15 weeks.

However, Chief Justice John Roberts, while agreeing with the opinion on the Mississippi law, disagreed with the majority’s decision that overturned the landmark 1973 Roe v. Wade decision and the 1992 ruling in Planned Parenthood v. Casey.

The latter case affirmed Roe and prohibited regulations that created an “undue burden” on women seeking an abortion.

Archbishops Gomez and Lori said the new ruling marks a “time to begin the work of building a post-Roe America.”

“We thank God today that the court has now overturned this decision,” they said. “We pray that our elected officials will now enact laws and policies that promote and protect the most vulnerable among us.”

The archbishops recalled the lives of tens of millions of children who have lost their lives since 1973, saying the USCCB mourns their loss and that their souls have been entrusted to God.

“Our hearts are also with every woman and man who has suffered grievously from abortion,” they said. “We pray for their healing, and we pledge our continued compassion and support. As a church, we need to serve those who face difficult pregnancies and surround them with love.”

Archbishop Gomez and Archbishop Lori also credited the people who for five decades have worked peacefully together “to educate and persuade their neighbors about the injustice of abortion,” to provide care and counseling to women, and to work for alternatives to abortion such as foster care and public policies that support families.

The Pontifical Academy for Life, under its president, Archbishop Vincenzo Paglia, joined the USCCB leaders in welcoming the Supreme Court’s opinion, saying it points the way for the world to follow.

“The court’s opinion shows how the issue of abortion continues to arouse heated debate,” an academy statement said. “The fact that a large country with a long democratic tradition has changed its position on this issue also challenges the whole world.”

“The protection and defense of human life is not an issue that can remain confined to the exercise of individual rights but instead is a matter of broad social significance,” it continued. “After 50 years, it is important to reopen a non-ideological debate on the place that the protection of life has in a civil society to ask ourselves what kind of coexistence and society we want to build.”

Archbishop Paglia added, “In the face of Western society that is losing its passion for life, this act is a powerful invitation to reflect together on the serious and urgent issue of human generativity and the conditions that make it possible; by choosing life, our responsibility for the future of humanity is at stake.”

“The Dobbs case marks a new era for the work of the church and all those who strive to protect children in the womb,” the Florida Conference of Catholic Bishops said. “We strive to continue to build a society that empowers women so that mothers are truly supported throughout pregnancy and beyond.”

The Florida bishops also pledged to “remain passionate in the collective effort to change hearts and minds … so that abortion is unthinkable, and to advocate for the legal protection of human life in the womb accompanied by profound care for mothers and their children.”

The eight prelates of the New York State Catholic Conference said they were “overjoyed with the outcome of the court.”

They also acknowledged “the wide range of emotions associated with this decision” and called on “all Catholics and everyone who supports the right to life for the unborn children to be charitable, even as we celebrate an important historical moment and an answer to prayer.”

Saying the court’s ruling was “a judicial victory, not a cultural one,” the New York bishops called for building a “culture of life” by enacting family-friendly policies that welcome children, support mothers, cherish families and empower them to thrive.”

Cardinal Joseph W. Tobin of Newark, New Jersey, said in a statement the ruling recognizes “that even the most helpless and dependent human beings have a right to life and possess inherent dignity and worth.”

Pointing to the words of Pope Francis, Cardinal Tobin said, “Abortion is not a religious issue; it’s a human rights issue.”

“We recognize that a woman’s decision to have an abortion is often tragic and panful,” he said. “A woman who takes this desperate action is often under great duress and is encouraged by social structures that are patently sinful.

“As people who care deeply for all women struggling with unplanned or unwanted pregnancies, we must ensure that life-giving options are available and our support does not end simply with the birth of a child.”

In Milwaukee, Archbishop Jerome E. Listecki said that while pro-life people feel a renewed sense of hope for the future, “let us also remember that our struggle to preserve the sanctity of human life is only just beginning.”

“Abortion laws now return to the individual states. Our challenge is to continue to promote that human life begins at conception and needs to be protected at all times,” he said, appealing to the broad society “to work together to make the thought of abortion not only unthinkable, but also unnecessary.”

Bishop Daniel E. Thomas of Toledo, Ohio, recognized the years of work by Catholics and others to support the life of children in the womb and called for them to now ensure that life-affirming resources are accessible to families.

He also called on “all persons committed to the common good to advocate for life and pray that our local leaders and public servants uphold the dignity of each and every human person from the moment of conception until natural death.

The Association of U.S. Catholic Priests called the court’s decision momentous. “Yet this day is no different than any other as we honor as always God’s gift of life from conception to natural death,” the association said in a statement.

The president of the Catholic Medical Association said the court’s decision “signals a long-awaited return to consideration of the most innocent and defenseless of American citizens: the unborn child.”

“We are filled with gratitude and relief, as Catholics, to know this heinous and medically unfounded aw has been overturned,” Dr. Craig Treptow said. “For too long it has influenced people to believe abortion is just, when in fact the truth is the exact opposite.”

He expressed satisfaction knowing that medical advances that indicate life from the moment of conception were considered by the justices.

“I want to thank each of my colleagues in medicine around the country and the world whose research and dedication to their practice helped make this possible,” Treptow added.