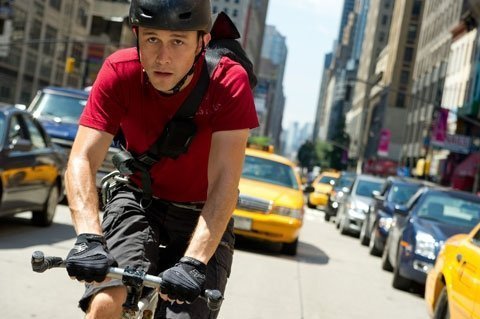 NEW YORK (CNS) — For many New Yorkers, especially those who like to perambulate their city without risking life and limb, few subcultures are less sympathetic than that of Gotham’s bicycle messengers. So it’s a pretty safe bet that there are at least a few hundred thousand peripatetic potential viewers out there who will have to suspend a great deal of disbelief to take a liking to the characters in "Premium Rush" (Columbia).

Further stumbling blocks along the energetically traversed path of director and co-writer (with John Kamps) David Koepp’s drama include gritty dialogue that catches viewers in a slipstream of unrelieved vulgarity and vivid scenes of accidental injury and purposeful inhumanity.

All that said, star Joseph Gordon-Levitt goes a long way toward making his character, fleet of foot pedaler Wilee — yes, boomers, as in Wile E. Coyote — more amiable than expected. He’s cocky, to be sure, but not in the odious way of his main speed-rival Manny (Wole Parks). Along with trying to outstrip and out-trash-talk Wilee on the streets, Manny has his eye on Wilee’s girl, their co-worker Vanessa (Dania Ramirez).

Yes, Virginia, there are some characters in this movie who are not employed as messengers. Take Vanessa’s roommate Nima (Jamie Chung), for example; she toils at prestigious Columbia University. Dispatched to Columbia’s campus for a pickup one day, Wilee is surprised to find his acquaintance Nima in the role of client. She has an envelope she wants to have delivered to Chinatown post haste.

No sweat. Except that — for reasons Wilee can’t initially fathom, nor can we — someone else wants the contents of Nima’s envelope really, really bad. That would be half-crazed rogue cop Bobby Monday (Michael Shannon).

Dangerously in debt due to his gambling addiction — his game of choice, oddly enough, is a Chinese version of dominoes called Pai Gow — Monday is on the run from loan sharks. He’s convinced that Nima’s package holds, shall we say, the ticket to his salvation.

The ensuing dash all around the town gives Koepp the opportunity to serve up some fluid and suspenseful chase scenes, and he capitalizes on it with style.

But he and Kamps irresponsibly glamorize the recklessness of the couriers’ lifestyle as a thrilling alternative to the boredom of office work. Thus daredevil Wilee — his bike literally has no brakes — is portrayed as a veteran, perhaps a graduate, of Columbia’s law school who refuses to take the bar lest he have to wear a suit all day. Way to stick it to the Man, Wilee!

Though various characters fly through the air and land with a thud, they take their lumps with such indifference that any implicit warning about a downside to all this quickly gets left behind on the pavement.

As for Monday, in his increasing desperation and quasi-lunacy, he resorts to a level of cruelty that even most adults may find difficult to witness.

The film contains scenes of violence, including beatings and torture, about 20 instances of profanity, at least one use of the F-word, pervasive crude and crass language and obscene gestures. The Catholic News Service classification is L — limited adult audience, films whose problematic content many adults would find troubling. The Motion Picture Association of America rating is PG-13 — parents strongly cautioned. Some material may be inappropriate for children under 13.