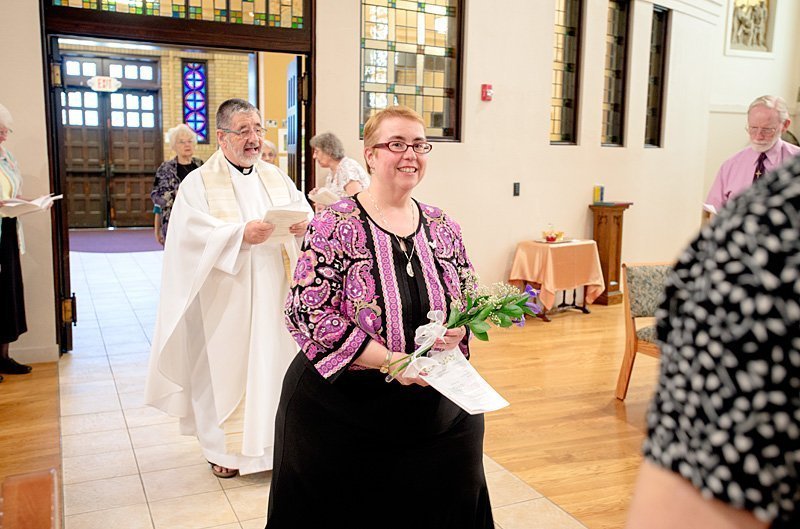 That’s how several people, including Sister Melissa Rose Gernon and Father Ray Fleming, described the events of May 2, when Sister Gernon publicly professed her perpetual vows as a Sister of St. Joseph during a joy-filled liturgy at St. Monica Church, where Father Fleming is pastor. 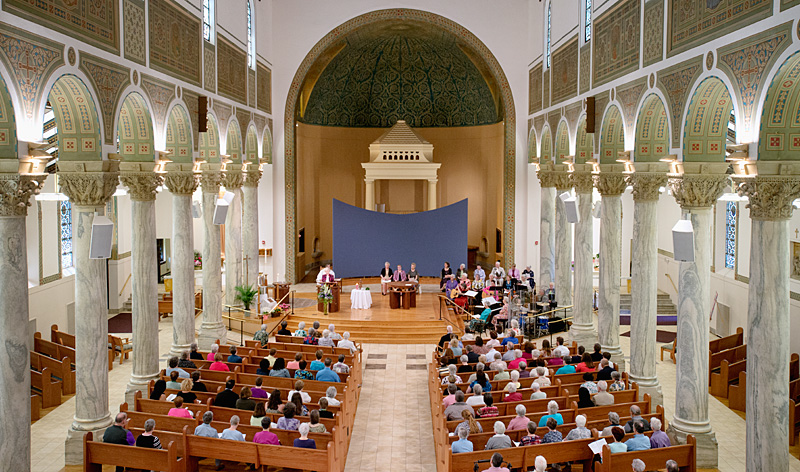 "It’s a glorious thing for me to be able to answer God’s call the way he’s called me, and I’m so happy. I’m so glad I can call myself a Sister of St. Joseph for the rest of my life," Sister Gernon told the Catholic Courier.

A beaming Sister Gernon professed her vows in front of dozens of fellow Sisters of St. Joseph as well as her parents, Joanne and Robert Gernon, and a number of other family members and friends. As her sisters, friends and loved ones looked on, Sister Gernon first pledged to unite herself more closely to God by the bond of religious profession; to continually grow in the love of God and neighbor by living the Gospel; and to choose a life of consecrated celibacy and the practice of the evangelical counsels of chastity, evangelical poverty and prophetic obedience.

Several minutes later she professed her commitment to follow Jesus through the evangelical counsels as a Sister of St. Joseph of Rochester, and her congregation’s president, Sister Mary Lou Mitchell, formally accepted those vows.

"I desire to live in humility and charity and to serve others without distinction by the works of mercy and justice," Sister Gernon pledged while professing her vows. "I ask your grace and the help of my sisters in community to be faithful to this commitment, and to grow in it daily, and to live and die in the congregation of the Sisters of St. Joseph of Rochester."

Professing those vows filled Sister Gernon with great joy and gratitude, she said, especially when she recalled that just 15 years ago she never could have imagined herself saying those words. Although she grew up in a Catholic family, was baptized and made her first Communion and confirmation, she "wasn’t really a church-goer" until early 2000, she said, and even then she had no desire to enter a religious congregation.

A teacher by trade, in December 2003 she began living in community with other like-minded individuals at a teacher-mentoring house sponsored by the Sisters of St. Joseph and located at the former Ss. Peter and Paul Church on Rochester’s West Main Street. Her decision to live there was based solely on her desire to be surrounded by people supportive of her teaching vocation, she recalled.

"I can remember sitting at the kitchen table talking with my mom one day, saying I don’t want to become a sister. I’m just living in community," Sister Gernon said.

By February 2005, however, she’d changed her mind and become a candidate for the Sisters of St. Joseph. She was drawn to the congregation, she said, by the sense of community she felt among the sisters, their sense of hospitality, and the way they welcomed and accepted her.

"I really believe in our charism, which is to take the love that I’m shown and share it with the world in order to build relationships with God and each other," Sister Gernon said.

She taught at Rochester’s Corpus Christi School during her candidacy, and in June 2007 she entered the novitiate, which is a two-year period of study, reflection and service. She spent the first of those two years in Orange, Calif., where she learned more about the history and mission of the Sisters of St. Joseph with other novices from congregations around the nation. The second year of that formation period was spent in Rochester, where she lived in community with a group of sisters and participated in congregational events.

Sister Gernon said she appreciated every step of this formation process, especially since women in the first stages of formation aren’t always sure exactly how to interpret the call they’re feeling, or what it really means for them.

"The process allows you the chance to get in touch with the person God has called you to be. It’s a wonderful process," she said.

Sister Gernon professed her first vows as a Sister of St. Joseph on Oct. 31, 2009. After that she taught preschool at St. John Neumann School and first grade at Christ the King School before settling into her current position as a preschool teacher at Nazareth Elementary School, which is owned and operated by the Sisters of St. Joseph. She plans to remain in that ministry for the foreseeable future, unless God tells her otherwise.

"My only hope and goal is to go wherever God wants me to go and do whatever he asks me to do," Sister Gernon said.