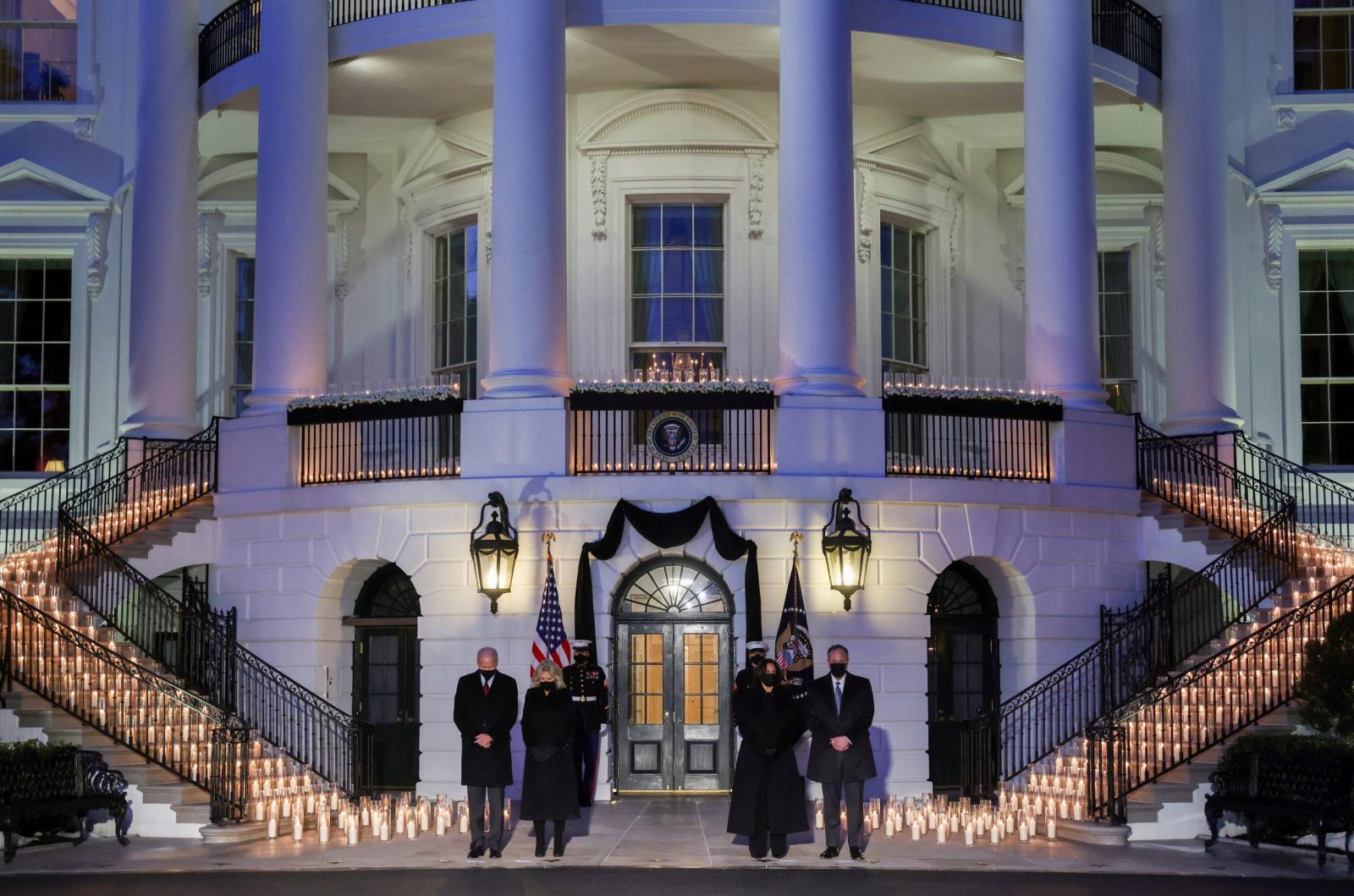 President Joe Biden and Vice President Kamala Harris stand with their spouses at the White House in Washington Feb. 22, 2021, during a candlelit ceremony to commemorate the grim milestone of over 500,000 U.S. deaths from the coronavirus. (CNS photo by Jonathan Ernst/Reuters)

WASHINGTON (CNS) — President Joe Biden addressed the nation in a speech from the White House Feb. 22, the day the nation reached, and then passed, what he called the “truly grim, heartbreaking milestone” of 500,000 U.S. deaths from COVID-19.

He urged Americans to “resist becoming numb to the sorrow” brought on by the hundreds of thousands who died this past year, a number which he said is more than the Americans who died in the two world wars and the Vietnam War.

“We have to resist viewing each life as a statistic or a blur or on the news. And we must do so to honor the dead,” he said, but also to “care for the living and those left behind.”

The president’s address was prior to a moment of silence outside the White House, where he was joined by first lady Jill Biden, Vice President Kamala Harris and second gentleman Doug Emhoff. Alongside them were 500 lit candles symbolizing the 500,000 deaths. The Marine Corps band played “Amazing Grace,” and when the song ended, the president made the sign of the cross and the two couples went back inside.

In his 10-minute remarks before this moment of silence just after sundown, the president urged the nation not just to remember the dead, whom he described as “extraordinary Americans” from all walks of life, but to also fight against the virus that has impacted so many.

“We have to fight this together, as one people, as the United States of America. That’s the only way we’re going to beat this virus, I promise you,” he said, urging Americans not to let these milestones of numbers of deaths continue to “mark our national mourning.”

“Let this not be a story of how far we fell, but of how far we climbed back up. We can do this,” he said, speaking as one who knows the impact of grief firsthand from deaths of his first wife and young daughter almost 50 years ago in a car crash and his son Beau’s death from cancer just over five years ago.

The president, stepping full into the role of “consoler-in-chief,” personally addressed those who have lost loved ones through COVID-19.

“For the loved ones left behind, I know all too well. I know what it’s like to not be there when it happens. I know what it’s like when you are there, holding their hands. There’s a look in your eye, and they slip away. That black hole in your chest — you feel like you’re being sucked into it, the survivor’s remorse, the anger, the questions of faith in your soul.”

He said for some in the nation, these deaths were a year ago, or a month, a week, a day or even an hour, but “when you stare at that empty chair around the kitchen table, it brings it all back, no matter how long ago it happened, as if it just happened that moment you looked at that empty chair. The birthdays, the anniversaries, the holidays without them. And the everyday things — the small things, the tiny things — that you miss the most.”

He also acknowledged the lack of normal rituals to help people cope with loss and honor the dead.

The president said he received a letter from a daughter whose father died of COVID-19 last Easter and said she wondered about the significance of her own loss up against so many other losses. He said she and her family enter this Lent, “a season of reflection and renewal, with heavy hearts” since they were unable to properly mourn.

Although he spoke solemnly of the innumerable losses America has experienced, he also gave the nation a collective “there, there” pat on the back, urging its citizens to keep going and not to let the pandemic have the last word.

Echoing his message at the COVID-19 memorial the day before his inauguration, he said: “To heal, we must remember. I know it’s hard. I promise you; I know it’s hard,” but he also stressed that one day it would get easier and said one way to help this happen is to find purpose.

To that end, he advised Americans to “remain vigilant, to stay socially distanced, to mask up, get vaccinated when it’s your turn.” He also pleaded for an end to the “politics and misinformation that has divided families, communities, and the country, and has cost too many lives already.”

“It’s not Democrats and Republicans who are dying from the virus,” he stressed. “It’s our fellow Americans. It’s our neighbors and our friends, our mothers, our fathers, our sons, our daughters, husbands, wives.”

Biden, who has been president just over one month, said that in this year of loss, Americans also have displayed profound courage on the front lines.

“I know the stress, the trauma, the grief you carry. But you give us hope. You keep us going,” he said directly to those who have been on the front lines throughout the pandemic.

He told them they remind the nation to take care of our own and to leave nobody behind.

“While we have been humbled, we have never given up,” the president said. “We are America. We can and will do this.”