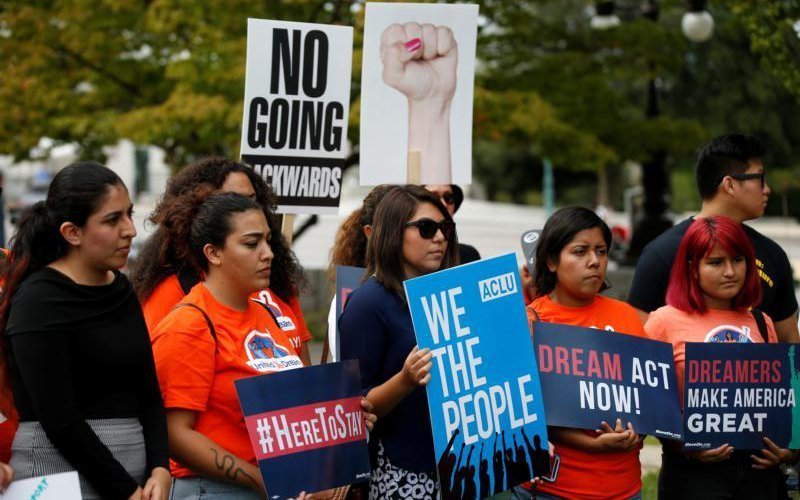 Young immigration activists and those enrolled in the Deferred Action for Childhood Arrivals program, or DACA, take part in a rally Sept. 12 in Washington to urge Congress to pass the DREAM Act. Catholic college presidents have been vocal in their support for DACA students and have offered additional resources for these students on their campuses.

Before hurricanes took over the news cycle, two other stories absorbed the country’s attention — President Donald Trump’s chest-thumping exchange with Kim Jong-un, and his decision to end Deferred Action for Childhood Arrivals (DACA). In an odd way, these issues are alike.

Let us begin with the potential nuclear conflict. Asked by a reporter during a trip to church whether he would attack North Korea, the president replied, “We’ll see.” As though he just hadn’t made up his mind yet.

Mr. Trump is not the first president to act as though he has the power to start a war. But he doesn’t. Article I of the Constitution says, “The Congress shall have power ‚Ä¶ to declare war.”

The framers did this on purpose. Because the burdens of war (death and taxes) are felt by the people, the Constitution requires their representatives to approve the undertaking.

We had a painful reminder of this in another presidential venture, the Vietnam War. When it was over, Congress passed the War Powers Resolution, which insists on congressional approval whenever the president commits armed forces to real or imminent hostilities.

Consider now the decision to end DACA. Most of the media, and both Republican and Democratic leaders in Congress, urged the president to extend the program.

But Article I of the Constitution says this too is the job of Congress, not the president: “The Congress shall have power ‚Ä¶ to establish an uniform rule of naturalization.” It’s the president’s job, according to Article II, to “take care that the laws be faithfully executed,” not to suspend their operation, or make his own.

We’re all tempted to ignore these rules when the president is a member of our own party, or wants an outcome we favor. In 2010, when he was first asked to make a unilateral change in the immigration laws, President Barack Obama said, “I am not king. I can’t do these things just by myself.” But by 2012, he had grown impatient with Congress and suspended the law for childhood arrivals.

Five years later, I found myself rooting for his successor to extend DACA. It seems both merciful and just to protect young people who were brought here by their parents, went to school, served in the military, held jobs, obeyed the laws and love America. What does it matter who makes the rule, so long as the rule is just?

It does matter. The president is not some Plantagenet monarch whose will or whim governs the nation. The kings of England historically had such power. John Locke described it thus: “This power to act according to discretion for the public good, without the prescription of the law and sometimes even against it, is that which is called ‘prerogative.’”

If he got up in the morning and felt like it, the king could suspend the laws, levy taxes, take the nation to war. If we give our president prerogative powers, he too will exercise them on Kim Jong-un as well as DACA.

The constitutional history of England is a slow march away from this style of government. The Glorious Revolution made the king subservient to Parliament and limited his prerogative to suspend the laws. The American Revolution gave us a Constitution that dispensed with the notion of prerogative power altogether.

Congress can make DACA permanent, and it should. For too long, its members have preferred controversy over compromise, refusing to do what most Americans want in order to please their bases.

Urging the president to exercise prerogative power gives Congress a happy outcome without the attendant responsibility. But it hands back to the executive a responsibility that it took centuries to take away from him.