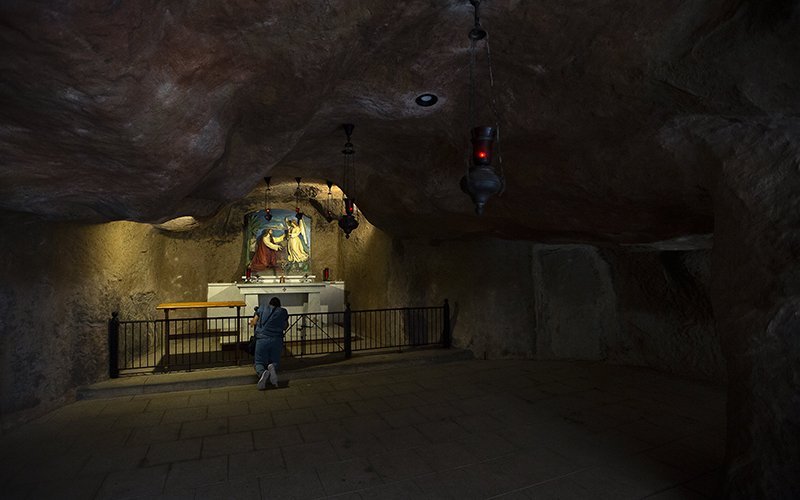 A woman in Washington prays inside the grotto of Gethsemane on the grounds of the Franciscan Monastery of the Holy Land in America in Washington May 4, 2021. The monastery supports the Holy Land, its people and its holy sites. (CNS photo by Tyler Orsburn)

WASHINGTON (CNS) — A diverse group of Christians, including the nation’s Catholic president and the bishop of the statewide Diocese of Portland, Maine, have offered reflections for the National Day of Prayer, observed on the first Thursday of May each year.

“Religious faith and prayer have served as a constant inspiration and a driving force urging us toward freedom and justice since America was still an idea. They continue to guide us through our most difficult moments,” said Bishop Robert P. Deeley of Portland in a May 6 statement.

“That is a truth that has been proven throughout our history. Teaching, ministering, and contributing to the needs of others generously, and showing mercy to those who need it, are the foundation of our nation and our lives as Christians, putting flesh on our prayers and our faith,” he added.

President Joe Biden, in a May 6 National Day of Prayer proclamation, said: “Today, we remember and celebrate the role that the healing balm of prayer can play in our lives and in the life of our nation.”

“As we continue to confront the crises and challenges of our time — from a deadly pandemic, to the loss of lives and livelihoods in its wake, to a reckoning on racial justice, to the existential threat of climate change — Americans of faith can call upon the power of prayer to provide hope and uplift us for the work ahead,” Biden said.

“We unite with purpose and resolve, and recommit ourselves to the core freedoms that helped define and guide our nation from its earliest days. We celebrate our incredible good fortune that, as Americans, we can exercise our convictions freely — no matter our faith or beliefs,” he added.

“Let us find in our prayers, however they are delivered, the determination to overcome adversity, rise above our differences and come together as one nation to meet this moment in history.”

Biden, who served eight years as vice president under Barack Obama, was slated to offer a prerecorded message during a Pray.com National Day of Prayer program featuring several evangelical leaders and musicians. Among the speakers will be Biden’s successor as vice president, Mike Pence.

While the National Day of Prayer, first instituted in 1952 and observed on the first Thursday of May since 1988, has become the province of evangelical Protestants over the years, this year’s observance will be more widely ecumenical.

Black clergy in New York are scheduled to join political and faith leaders on the steps of the Episcopal Cathedral of St. John the Divine in New York City in calling for the state’s houses of worship to be declared essential.

Religions for Peace USA was planning a National Day of Prayer event focusing on discrimination against Blacks, American Indians and Asian Americans, Sikhs among them.

The National Day of Prayer Task Force itself was also slated to offer an apology to American Indians to be read by ex-Kansas Gov. Sam Brownback, a former U.S. senator who joined the Catholic Church while serving as an elected official.

The North Carolina Council of Churches was to offer an online event called a “Prayer Vigil for Courage” while taking note of violence against Blacks.