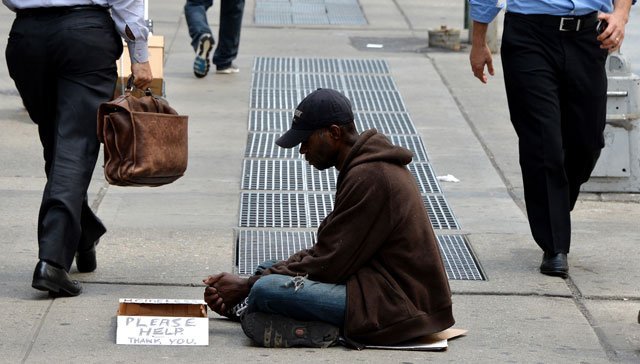 In this June 16, 2014, file photo, a homeless man sits on a sidewalk in New York City. The Circle of Protection, a coalition of Christian leaders, is asking all U.S. presidential candidates to discuss how they plan to address U.S. poverty and hunger.
By Daniel O’Shea
Catholic News Service
WASHINGTON (CNS) — Seven presidential candidates have responded to a call from anti-poverty advocates by submitting brief videos outlining their plans to address poverty.
The videos, delivered to an umbrella organization known as the Circle of Protection that includes the U.S. Conference of Catholic Bishops, were made public July 21 by representatives of the group.
The productions included proposals and accomplishments ranging such as cutting taxes, changing domestic violence laws, raising the minimum wage, making higher education more affordable and strengthening private organizations so they can better meet the needs of poor people.
Having seven videos in hand thus far buoyed the efforts of the Circle of Protection members that poverty and hunger would become key issues in a presidential campaign that already is high gear.
"Christians are deeply concerned about the suffering of hungry and poor people, said Galen Carey, vice president for government relations of the National Association of Evangelicals, one of the organizations in the Circle of Protection. "We expect our presidential candidates to move beyond platitudes about the middle class and inspirational rags-to-riches stories."
The idea for a "circle of protection" around vital domestic social service programs and international aid emerged in 2011 among the USCCB and other advocates for the poor while Congress considered deep cuts to social services as a step to lower deficit spending and reduce the country’s debt.
The organization of more than 100 faith-based organizations in January invited candidates to submit three-minute videos outlining their plans to address hunger and poverty. Since then, letters have been sent to each candidate as they announced their presidential ambitions, inviting them to outline their platform to offer help and opportunity to people struggling in poverty if elected.
Through July 28, five Republicans and two Democrats had submitted videos. Republicans included former Florida Gov. Jeb Bush; retired neurosurgeon Ben Carson; Sen. Ted Cruz of Texas; Carly Fiorina, former Hewlett Packard CEO; and former Arkansas Gov. Mike Huckabee. Democratic candidates included former Maryland Gov. Martin O’Malley and Sen. Bernie Sanders of Vermont.
The Circle of Protection said at least four other candidates have pledged to submit videos including Hillary Clinton, a Democrat and former secretary of state, and Sen. Marco Rubio of Florida, Sen. Rand Paul of Kentucky and Sen. Lindsey Graham of South Carolina, all Republicans.
The Rev. Jim Wallis, president of Sojourners said the primary concern is getting a response from the candidates so that voters can hear about their plans and decide which candidate will best address the needs of the poor and hungry.
He said he hopes the media will follow up on the videos and continue to question all the candidates on the issues of concern to poor people.
"We are encouraged by more conversation about poverty and economic inequality than we have heard for some time, on both sides of the political aisle, so it is time to ask each person who wants to be president what his or her approach and strategy will be," Rev. Wallis said. "We need a national debate in this election year on how to reduce and end poverty—a goal we all can help achieve."
All of the videos can be viewed on the Circle of Protection website at http://circleofprotection.us/candidate-videos.
Copyright © 2023 Catholic News Service, Inc. All rights reserved. Linking is encouraged, but republishing or redistributing, including by framing or similar means, without the publisher's prior written permission is prohibited.