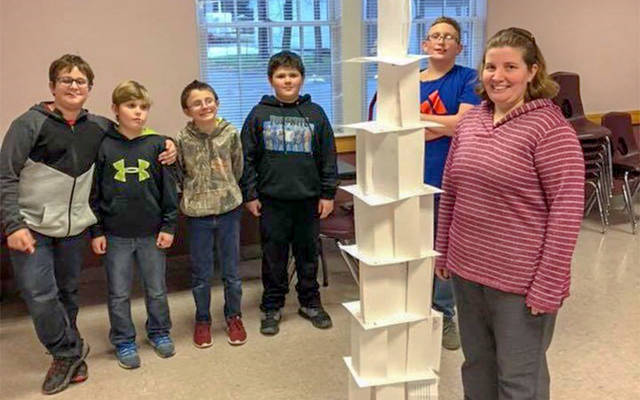 Stacey O’Dell, a prevention educator for Steuben Council on Addictions, poses Nov. 13 with her students and a project they produced during a program at Addison Youth Center. (Photo courtesy of Barb McCollumn)

When it comes to substance abuse, Catholic Charities of Steuben believes firmly in stopping a problem before it starts.

The agency, through its programs for children and adults of all ages, strives to help them develop the capacity for avoiding drug and alcohol abuse and addiction.

One such effort is the Steuben Council on Addictions, which raises awareness on substance abuse through public events, advertising and publicity. Program representatives also visit schools and adult community groups, educating participants in such areas as life skills, bullying prevention, self-esteem and active parenting — all of which have potential connections to substance-abuse prevention.

Another program of note is the Bath Area Hope for Youth, which offers individual and small-group counseling in schools for youths at risk for substance abuse. The initiative helps students form stronger and healthier ties with family and friends while improving their academic participation and sense of right and wrong.

Bassage noted that in his talks with students, he doesn’t bring up drugs with the youngest grades but simply emphasizes making good choices. He then introduces alcohol and marijuana into the conversation with grades 4 to 6, he said, because “they’re already thinking about experimenting.” And to high-schoolers, he emphasizes how an addiction or overdose can change one’s life.

To add conviction to his messages, Bassage brings in speakers who are current and former clients of Catholic Charities’ Residential Services for people recovering from addiction.

“This has been really positive,” Bassage said of the initiative, noting that when speakers share their personal stories of having first abused drugs and alcohol at an early age, youngsters in the audience become more likely “to make a different choice five, six, seven years from now,” he said.

Additional Substance Free Living efforts under Bassage’s direction are the John Southard Youth Recreation Program, which provides a summer camp and other social activities for Bath youths ages 5 to 15 as a means of offering healthy, drug-free activities; and the Impaired Driver Program, a seven-week curriculum emphasizing the efforts of alcohol and drug use on driver performance and safety. Catholic Charities also works in conjunction with the Steuben Prevention Coalition, a group of community organizations striving to reduce marijuana and underage alcohol usage by youths.

Meanwhile, the Residential Services component of Steuben Catholic Charities offers housing, support and education in helping adult clients prepare to return to the community and maintain a substance-free lifestyle. Administrative offices are located at 23 Liberty St., Bath, with Heather Meehan serving as director.

Bassage acknowledged that substance-abuse prevention covers a wide range in this day and age due to the ongoing opioid epidemic, a national scourge that was named an educational priority in 2018 for the Diocese of Rochester’s Public Policy Committee. According to information released in January 2018 by Common Ground Health, a Rochester-based research group, there were 14 deaths in Steuben County in 2016 due to opioid overdose — almost triple the five deaths from 2015 and the highest total outside Monroe County for a nine-county region that also includes Chemung, Livingston, Ontario, Schuyler, Seneca, Wayne and Yates.

“We’re seeing the gamut,” Bassage said regarding the recent substance-abuse history of Catholic Charities’ Residential Services clients. He said law enforcement is working hard to curb the opioid crisis in his region, noting that “you see it in the number of arrests. But things are still happening.”