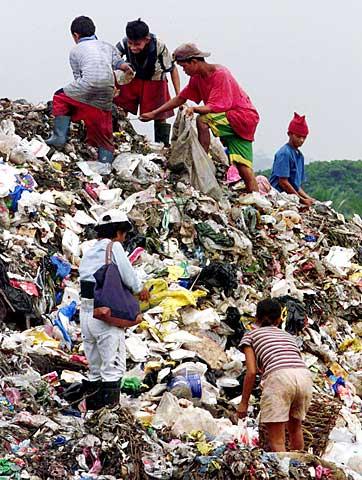 Filipinos scavenge the collapsed mountain of garbage in a dump near Payatas on July 12, 2000. The dump fell in a few days earlier, killing more than 200 people who lived at the base of the hill of rubbish.

Father James Hewes knows the meaning of perseverance. For the past 10 years, he has written hundreds of letters, spoken to countless people and helped raise more than $250,000 all for one cause — in a place that many people have never even heard of.

"I just have to keep doing what I can," said Father Hewes, parochial vicar at St. Jude the Apostle, St. Helen and Holy Ghost parishes in Gates.

The reason for Father Hewes’ determination originated from a short article he read 10 years ago describing the partial collapse of the Payatas municipal garbage dump in the Philippines. The destruction of the dump was not the remarkable aspect of the article, though: Payatas is inhabited by more than 140,000 people, and more than 200 of them were killed in the July 10, 2000, collapse.

"I was moved," Father Hewes recalled. "It was hard to imagine. I remember going to a garbage dump as a child with my father, and even just the smell was horrible. For people to be living in these conditions was beyond belief."

Shortly after the shock of the Payatas living conditions set in, the priest began to search for organizations to help the Filipinos who call the garbage dump home.

After an exhaustive search, he teamed up with Catholic Charities of Edmonton in Alberta, Canada, a sponsor of the Congregation of the Religious of the Virgin Mary nuns who work among the people in Payatas.

With the support of the foundation in Edmonton behind him, Father Hewes’ launched a personal letter and e-mail fundraising campaign. With a matching donation by Catholic Charities in Canada, he raised enough money to purchase two water trucks, which provide clean, affordable drinking water for the people of Payatas.

Fundraising efforts continued into 2006 when Father Hewes collaborated with musicians Nancy and John Bryan and Glenn McClure to create an 11-song CD titled "Songs for the Promised Land." The CD has grossed more than $215,000 to date.

Four years later, Father Hewes is still continuing his philanthropy. Donations for Payatas dramatically increased after an article, "Turning a Mountain of Garbage into a Monument of Hope," appeared in the April/May 2010 issue of the online Catholic magazine Words Among Us.

In response to the article, Father Hewes has received 250 e-mails requesting CDs, as well as donations of more than $25,000. This money also will be matched by the foundation in Edmonton, he said. Awareness for Payatas has clearly spread, he noted, as evidenced by the e-mails and donations he has received from 38 states and 21 countries.

The widespread knowledge of Payatas is encouraging, Father Hewes said. He hopes the awareness will continue to spread, especially since this past month marked the 10-year anniversary of the tragedy.

"I think that it has been put on the back burner," he said of Payatas. "There are places like Payatas in other countries too, but there are also so many other issues competing for attention. There are still a ton of people who forget about it … or don’t even know about it."

Father Hewes is not disheartened, though, and persists in his fundraising efforts by responding to a constant flow of e-mails and mailing out CDs. All donations go directly to Payatas.

All of the money and awareness raised for Payatas is a result of God’s providence, according to Father Hewes.

"There is no way I could have done this all on my own," he said.

In June, Father Hewes became parochial vicar at the Gates parishes, where he continues to educate parishioners about Payatas.

At his new assignment, and wherever else life may take him, he said he trusts in one truth: "You just have to do what you can, and allow God to do whatever he will with it."