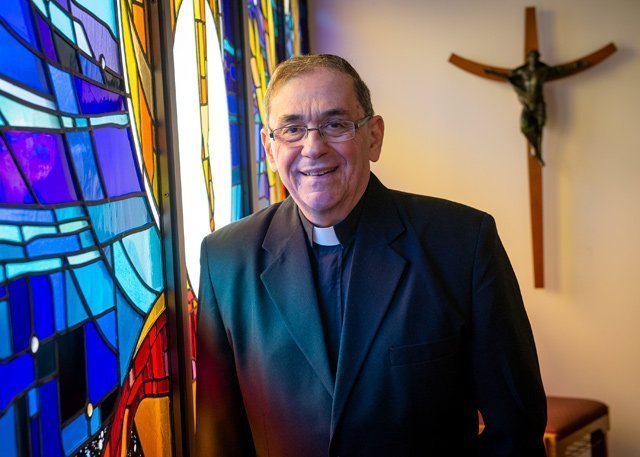 Father Stephen Kraus is retiring as pastor of St. Theodore Parish in Gates.

Parish ministry has been the focus of Father Stephen Kraus’ life for more than four decades, and he wouldn’t have it any other way.

“I’ve been a parish priest my entire priesthood, and I have thoroughly enjoyed that. I can say that all of my assignments were very good assignments with very good people,” remarked Father Kraus, pastor of St. Theodore Parish in Gates.

Father Kraus, who will reach senior-priest status at the end of June, said he first began discerning his vocation when he was in fourth grade at St. Thomas the Apostle School in Irondequoit. His teacher, a Sister of Mercy, asked him if he’d ever thought about becoming a priest, and asked the same question again when he was in seventh grade.

“She saw something in me. That prompted me to talk to our pastor,” Father Kraus recalled.

Those questions and conversations provided the sparks that ignited his vocation to the priesthood. After graduating from eighth grade at St. Thomas the Apostle School in Irondequoit he studied at St. Andrew’s Minor Seminary in Rochester, followed by Becket Hall at St. John Fisher College in Pittsford and St. Bernard’s Seminary in Rochester.

Bishop Joseph L. Hogan ordained Father Kraus on May 9, 1975, at Rochester’s St. Andrew Church, where the priest had completed his diaconal internship. After ordination Father Kraus served as assistant pastor at St. Mary in Corning, St. Joseph in Penfield, St. Anne in Rochester and St. Mary in Elmira. He also served short stints at St. Mary in Waterloo, Holy Cross in Dryden, St. Salome in Irondequoit and St. Elizabeth Ann Seton in Hamlin when those parishes’ pastors were ill or away on sabbatical.

In 1990 Father Kraus became pastor at the clustered parishes of St. Joachim in Canisteo and St. Mary in Rexville. In 1996 he became pastor at St. Mary in Dansville. In 1998 St. Mary clustered with the neighboring parishes of St. Joseph in Wayland, St. Pius V in Cohocton and Sacred Heart in Perkinsville, and Father Kraus led the parishes as they formed the new Holy Family Parish in 2004.

Later in 2004, Father Kraus took on his current pastorate at St. Theodore in Gates, which was part of the Gates-Chili pastoral-planning group. Father Kraus soon became head of the group’s Gates-Chili Catholic Council, which guided three other Gates parishes — St. Jude, St. Helen and Holy Ghost — as they began working together as a cluster and later formed Parish of the Holy Family in 2016.

Being a part of the formation of a new parish is a challenging yet satisfying experience, Father Kraus said, noting that he’s grateful he was able to experience this twice.

“Both experiences were very challenging but very rewarding for me. I got a lot out of that,” he said. “In forming a cluster you’re trying to bring together all the different viewpoints that people have, and arrive at a point where they can all agree on the major points. I think that’s a big challenge. That was a very good experience.”

Parish ministry has been a challenging yet positive experience, Father Kraus said.

“I’ve been enlivened and challenged, and people have been very, very good to me through many years,” he said.

Hospital ministry has been a particularly enjoyable facet of parish ministry, as has working with children and young people, he added. Father Kraus said he has enjoyed occasional experiences of working with parish music ministers. A musician himself, Father Kraus plays the piano, organ, trumpet, violin, cello and oboe and frequently provides the music for an annual priests’ retreat at Notre Dame Retreat House in Canandaigua.

Yet Father Kraus said his favorite part of parish ministry has been frequent opportunities to bring people closer to God. Sometimes this has happened through the Rite of Christian Initiation of Adults, other times through the sacrament of reconciliation, and sometimes at funerals, he said.

“Bringing people closer to God has been one of the most fulfilling things of these years. There’s just something about it that is just exciting and brings you real satisfaction.”