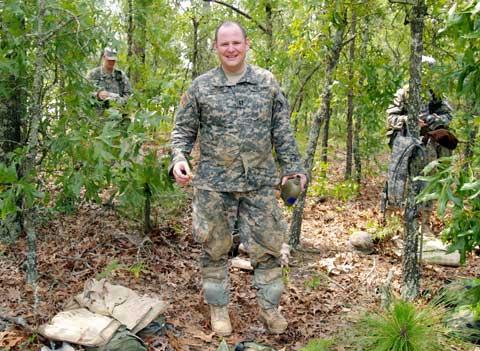 Father Patrick Van Durme is serving in Iraq as a U.S. Army chaplain. Above, he takes a break during basic training for chaplains at Fort Jackson, S.C., in 2008.

At 6,000 miles, Father Patrick Van Durme is serving farther away from home than any other priest of the Rochester Diocese. Yet he feels the war-torn country of Iraq is right where God called him, based on some startling numbers related to his United States Army chaplaincy.

"There are over 10,000 soldiers at the base where I am now, and I am the only priest for them," he said in an e-mail interview Dec. 10. "There are three Army priests for the entire northern half of the country, serving a combined total of 50,000 to 80,000 soldiers of whom 30 to 40 percent are Roman Catholic. I fly every week to cover two other large bases. There are a large number of soldiers who will never see a priest, in spite of our best efforts."

This urgent need is what spurred Father Van Durme, a Dansville native, to enter the Army in 2008 after spending the first eight years of his priesthood as a parish priest — including stints as parochial vicar at Blessed Trinity/St. Patrick parishes in the Tioga County area, and as pastor of Our Lady of the Valley Parish in western Steuben County.

Now known as CH (CPT) Patrick J. Van Durme — the CH stands for "chaplain" and the CPT for "captain" — he is on a one-year tour in northern Iraq. His assignment began in November 2009, as the United States continues its occupation of Iraq that extends back to 2003.

Father Van Durme is stationed with the Army’s 3rd Infantry Division at COS Marez, just outside of the city of Mosul. He compared his setting to the high desert in northern Arizona, except that "there are more explosions and random gunfire here," he remarked.

Father Van Durme said Mosul is "a very actively dangerous place with a good number of bad guys doing bad-guy stuff. I hear gunfire three or four times a week. It falls into the background noise, although it took some getting used to." He said he hasn’t been in any direct danger, but some soldiers from COS Marez have incurred injuries from enemy attacks.

Being in the line of fire can rattle even the strongest of wills. Thus, Father Van Durme said most of his discussions with soldiers are along the lines of general counseling, as opposed to religious matters. He pointed out that chaplains play a unique role because they’re the only military folks who have 100-percent confidentiality. That gives them special access to soldiers who struggle with stress, loneliness, depression, addiction, marital discord, grief, and thoughts of suicide or other violence.

"I am pretty good at getting them to get the (professional) help they need. If not for confidentiality, they might not go to see anyone. We are a last stop for some of these soldiers," Father Van Durme explained. "All the soldiers know that if they have a problem, they can always go to the chaplain and we will help them."

Family issues back home may add to the soldiers’ battle-related stress: "They struggle when the wife back home is lonely and alone and dealing with crying kids and says, ‘I want you to come home,’ and that is not going to happen," Father Van Durme observed.

Separation from home can be especially trying at holiday time. Father Van Durme said that "we do our best with the holidays," noting that Thanksgiving and Christmas were marked by "special concerts and great food" as well as gifts sent from home that were greatly welcomed.

Father Van Durme contends that military personnel are mistakenly perceived as being gung-ho about combat and bloodshed: "Every single soldier I have met so far is just a simple good soul that is trying to do something with their life. They might not have had tons of options as they were growing up, but they love this country and want to do something good," he stated, adding that they "stand in places that no one in their right mind would willingly go."

He said Bishop Matthew H. Clark — whose approval was necessary in order for him to go ahead with the chaplaincy — has been supportive of his decision despite the thinning number of diocesan priests. Father Van Durme said the bishop recognizes that military personnel deserve a priestly presence as well — and yet, there are less than 100 priests overall in the U.S. Army with more than 300 slots to fill. He noted that he ministers to all denominations; for example, in mid-December he helped arrange for some Jewish soldiers to attend a Hanukkah celebration.

Father Van Durme, who will turn 45 on March 15, said that of the 500 soldiers most directly in his care, he is one of only four over the age of 40 — a fact he was acutely aware of during an exhausting stretch of training.

"This is a young person’s game," he remarked. "I am really old in the Army."

This is not Father Van Durme’s first Army stint. He saw active duty nearly a quarter-century ago, and also was a Reservist prior to becoming ordained a priest in 2000.

In June 2008, upon rejoining the Army, he attended basic training for three months at Fort Jackson in South Carolina. From there he was sent to serve with the 3rd Infantry Division at Fort Stewart and Hunter Army Airfield in Georgia, becoming chaplain for the 1/3 Attack Battalion. In June 2009 he assumed the chaplaincy of the 1-9 Field Artillery Battalion, and that group was deployed to Iraq in November 2009.

Father Van Durme’s Iraqi tour is due to end in November 2010. His three-year Army agreement will be up in June 2011 and he’s not yet sure of his future beyond that.

For now, he rejoices in conversing with soldiers so that he can "maybe help them find a path. I know that God’s grace and blessings are there, and we can usually find some good path to follow."

"I love what I do," he added. "I have always loved being a priest, and that is still true."