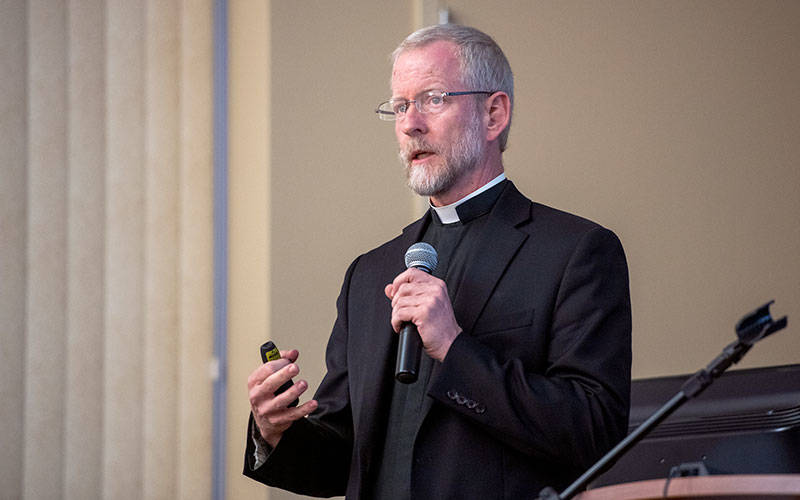 Father Tadeusz Pacholczyk was the featured speaker during the “Vaccines, Ventilators and the Ethics of COVID-19” presentation July 28 at St. Bernard’s School of Theology and Ministry in Pittsford. (Courier photo by Jeff Witherow)

PITTSFORD — May I vaccinate myself or my child with vaccines made from the fetal cell lines from abortion?

Can schools, colleges, businesses and the government mandate COVID-19 vaccinations?

Those were just some of the questions that Father Tadeusz Pacholczyk tried to answer at St. Bernard’s School of Theology and Ministry in Pittsford July 26 during his discussion on the Catholic perspective of issues related to the COVID-19 pandemic The presentation was sponsored by St. Bernard’s, the Diocese of Rochester’s Office of Life Issues and the Finger Lakes Guild of the the Catholic Medical Association. More than 50 people were in attendance, with more than 60 people viewing the presentation virtually via Zoom.

Father Pacholczyk, a priest of the Diocese of Fall Rivers, Mass., and director of education at the National Catholic Bioethics Center in Philadelphia, began his presentation with an overview on COVID-19 and where and how the virus originated. He also presented fatality and survival rates for the virus, how the virus spreads and efforts to control its spread through masking, social distancing and vaccination.

At one point, there were about 400 COVID-19 vaccine candidates in development worldwide, Father Pacholczyk noted. Many of those vaccine candidates have since been discontinued, but more than 30 candidates are in clinical trial, with several in phase three of the trial.

Prior to the COVID-19 vaccine, there was never a vaccine created in less than four years, Father Pacholczyk said.

“It was astounding accomplishment that they were able to do this so much more quickly,” he remarked.

With the race to get a vaccine for COVID-19, one of the ethical concerns, particularly for Catholics, is the vaccines available have certain types of reliance on cell lines from abortions. Certain vaccines have been produced in cell lines derived from fetal cadavers following abortions that happened decades ago. Father Pacholczyk said it is possible to make a vaccine without the use of cell lines from abortions, noting that non-human cell sources, like chick embryos, rabbit kidneys, quail embryos and hamster cells, can be used.

Yet, Father Pacholczyk said sometimes there aren’t alternatives available, which raises ethical questions among faithful Christians on whether they should receive vaccines that have been associated with abortions. Father Pacholczyk said the church has been examining this question since 2005. He quoted from the Vatican document Dignitas Personae, which states that people can receive vaccines made from fetal cell lines from abortions where “grave reasons may be morally proportionate to justify the use of such biological material.”

“That has actually been the constant, consistent position of the church on this matter from the earliest times,” Father Pacholczyk said.

With regard to the COVID-19 vaccines, Father Pacholczyk showed a chart that he created that highlighted the ethical profile of all the COVID-19 vaccines in the U.S. Of the three vaccines that have received emergency use authorization from the Food and Drug Administration, Father Pacholczyk noted that the Johnson & Johnson/Janssen vaccine had a fairly poor profile, as abortion-derived cell lines were used in both laboratory testing and development/production. The other two vaccines, Moderna and Pfizer, had a good profile, but did use some abortion-derived cell lines in laboratory testing.

“There’s no (vaccine) candidate that is available today that has no association (with abortions),” Father Pacholczyk explained.

So why it is allowable to receive the vaccine made using these cell lines? Father Pacholczyk said there is not a causal connection between people receiving the vaccine and the abortion that happened 30 or 40 years ago.

“Now it is true that you can say, ‘I’m benefiting from the evil act that somebody else did,’ but it’s not the case that you are causally contributing (to the abortion),” said Father Pacholczyk.

Whether a person should get a COVID-19 vaccine is a decision that must be evaluated by the individual’s particular situation and with good judgement, Father Pacholczyk added.

However, the growing lists of schools, colleges and businesses mandating the COVID-19 vaccine is the issue at bay right now, Father Pacholczyk said, noting that the National Catholic Bioethics Center has received numerous calls on the subject.

Expected population health benefits from widespread vaccination does not automatically create a moral obligation for everyone to be vaccinated, Father Pacholczyk explained. Instead, Father Pacholczyk said these organizations, especially colleges and universities, should seek to convince people through careful and appropriate explanation of their personal need to receive a vaccine so that they may freely choose to do so.

“We need to be training young people how to think about these problems. They are the future leaders of tomorrow, and instead what are we doing, we are doing these blanket mandates,” Father Pacholczyk remarked.

“There is no universal moral obligation to accept or refuse vaccines. Again, it should be a voluntary decision,” he added.

Instead of mandates, Father Pacholczyk said there should be education and initiatives to have people think seriously about the vaccinations, but that mandates go too far as a universal tool. However, any mandates that do get put out should make at least three exemptions available, such as medical, religious and conscience exemptions.