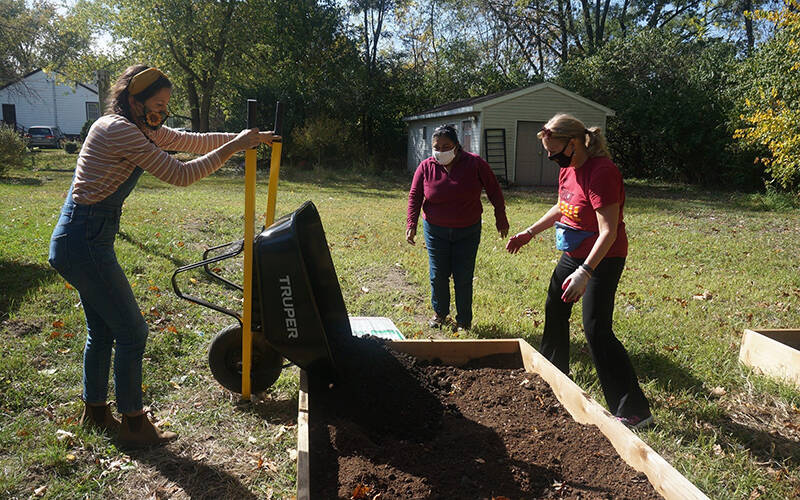 People work on a garden at Sacred Heart Parish Mission in the Diocese of Joliet, Ill. The food grown will be distributed to people in need of food assistance in the community. (CNS photo courtesy Diocese of Joliet)

CLEVELAND (CNS) — Father Michael Bausch has long been concerned about the environment and would speak at times about care for God’s creation during homilies at his parish in the Diocese of Rochester, New York, where he was pastor for 19 years.

In a letter posted on the Association of U.S. Catholic Priests website at bit.ly/2Y2SJYt, Father Bausch encouraged priests to discuss the topic of caring for God’s creation at Masses the weekend of Oct. 2-3 as the Season of Creation closes this year.

The Season of Creation has been observed by churches worldwide in recent years from Sept. 1 through Oct. 4, the feast of St. Francis of Assisi.

“I certainly have gotten the sense that we in the church are not taking the whole issue of creation care as seriously as it could be,” Father Bausch told Catholic News Service. “It’s very, very important to get creation care in front of people. This is a moral and ethical issue that we need to be addressing as a church.”

While Father Bausch said he realizes some parishes have established creation care teams and the Catholic Climate Covenant has been spearheading efforts to address climate change and develop resources to promote Pope Francis’ encyclical, “Laudato Si’,” he had found that too many Catholics are unaware of church teaching on stewardship of the environment.

As vice chair of the AUSCP and head of the Ohio-based association’s climate crisis working group, Father Bausch said that’s what motivated him to write the letter.

Addressing creation care as the Season of Creation ends, he explained, provides a bridge to Respect Life Month, which the church observes in October.

“People know our position on capital punishment and abortion,” he said, “and when they hear ‘Laudato Si’,’ it’s, ‘Huh?’”

People are ready to take steps to address climate change if they see clergy doing the same, Father Bausch added.

Meanwhile, the Archdiocese of Seattle marked the Season of Creation by signing the “Healthy Planet, Healthy People” petition, which calls political leaders to set meaningful goals to address environmental concerns and affirm the Paris climate agreement at upcoming U.N. meetings.

The effort is sponsored by dozens of Catholic organizations and was originated by the Laudato Si’ Movement.

“We have signed this petition because our planet is in peril, facing an unprecedented ecological crisis,” Seattle Archbishop Paul D. Etienne said in a statement.

“The issues caused by our reckless consumerism, irresponsibility and indifference not only harm the delicate balance of our natural ecosystem but harm our poorest brothers and sisters. We must remember this is our common home and we are all responsible for its care,” he said.

The archbishop also invited parishioners to sign the petition, which is online at thecatholicpetition.org, and to become involved with the Catholic Climate Covenant or the worldwide Laudato Si’ Movement, which is working with the Vatican on the seven-year Laudato Si’ Action Plan.