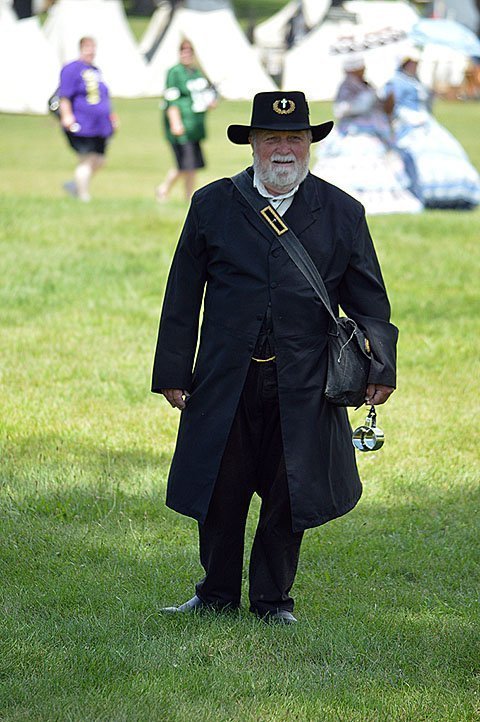 Father Bruce Hennington, playing the role of a chaplain, takes part in a Civil War re-enactment in early August in Boscobel, Wis. He also has participated in re-enactments throughout the country for the past four years, including the 150th anniversary of the Battle of Gettysburg, Pa., in 2013. Father Hennington is a retired priest of the Diocese of Madison, Wis.

"I read anything I could get my hands on," said the now-retired Diocese of Madison priest. "Fifty years later, I joined up!"

By that he means he is now a Civil War re-enactor. He has been traveling the country for the past four years in his RV, taking part in Civil War re-enactments not only in his home state of Wisconsin, but also in Florida, Georgia, Virginia, Pennsylvania, Minnesota, Texas and Arizona.

In fact, he plans his RV travels to coincide with Civil War re-enactments.

When he retired from parish work in 2010, Father Hennington said someone suggested that he attend the Civil War re-enactment held each year in Boscobel, Wisconsin.

He went as a spectator and met people involved with the 2nd Wisconsin Volunteer Infantry Regiment, which he said spent most of the Civil War as a part of the famous Iron Brigade of the Army of the Potomac, the major Union Army in the Eastern theater of the Civil War.

Called "Muskets and Memories," the Civil War re-enactment in Boscobel has become one of the largest and most popular Civil War era re-enactments in the upper Midwest, attracting nearly 1,000 participants and more than 8,000 spectators each year in early August. This year’s re-enactment was the 22nd annual event.

When Father Hennington went to the Boscobel re-enactment in 2010, he didn’t intend to get involved. But by the final day, a Sunday, he was "hooked up" with the 2nd Wisconsin as a chaplain.

"They had a chaplain before, but he had died. Nobody had replaced him," the priest told the Catholic Herald, newspaper of the Madison Diocese. He took the position and went with the regiment to another re-enactment that year.

The rest is history, as they say.

He has returned to Boscobel every year since and has expanded his re-enactment experience to other parts of the country. He always re-enacts as a chaplain, specifically as a priest.

"I started doing research on chaplains in the Civil War and found all the chaplains listed for the Wisconsin units," he said.

One of the chaplains on the list was Father George Riordan, a priest at St. Raphael Parish in Madison in the mid-1850s.

"I knew that name," said Father Hennington, because his first assignment as a priest was at that parish.

He found out that Father Riordan was born in Ireland and ordained in Boston. His first assignment was at St. Raphael. He was a chaplain in the Civil War and then moved to St. Thomas Parish in Beloit, Wisconsin. He died in 1868.

Although Father Hennington doesn’t do a "first-person impression" of Father Riordan, he does dress and act similar to the way a chaplain like Father Riordan would have in the Civil War.

In his research, Father Hennington has discovered that chaplains did much more than provide religious services. Chaplains were considered members of the commander’s staff, he said.

Their duties included keeping morale up among the troops, making sure food and the quality of life in the camps were sufficient.

Said Father Hennington, "Camps were gruesome in the Civil War. The chaplains would make sure that the troops were paid regularly and would ensure that mail was delivered."

They also were to promote good morals of the troops. The chaplain would conduct a religious service in the camp every Sunday to last no more than 20 minutes, "so as not to interfere with scheduled drills," noted Father Hennington. "Sunday was not a free day in camp."

Chaplains also prayed with the wounded and conducted funerals.

There was only one chaplain in a regiment, so the chaplain served all denominations. However, the chaplain could do service according to the rituals of his own denomination. "That still applies to chaplaincy today," said Father Hennington, explaining he does Mass for Catholics "but a preached service for others."

The chaplains also had printed religious tracts/devotionals, which they handed out in the camp to provide spiritual reading and entertainment for the troops. "They would sit around the campfire and read the tracts," said Father Hennington. "I print my own and hand them out. They include stories and prayers, some of them specifically Catholic in nature."

Chaplains would often hold classes in reading, writing and arithmetic for the troops. Since many soldiers couldn’t read or write, chaplains also would handle letters from home and were often responsible for notifying families of the death of soldiers.

Father Hennington has found his re-enactment experience very enriching. "I have met so many fascinating, gregarious people. Our unit is ‘family-friendly,’ so many families travel with the re-enactors."

The priest does celebrate Mass during re-enactments. He carries with him a field altar, vestments, and everything he needs. "I don’t do a period Mass. Some priests do a Mass in Latin exactly like it was celebrated in the Civil War. I use the current sacramentary."

However, he said all the re-enactments are "period correct," which means that modern watches are put away and cellphones are turned off. People cook over open wood fires, and all try to be "as authentic as you can be," he said.

"We try to recreate what life was like in the Civil War. The public comes to watch, so it is a real learning experience."

Uhler is editor of the Catholic Herald, newspaper of the Madison Diocese.