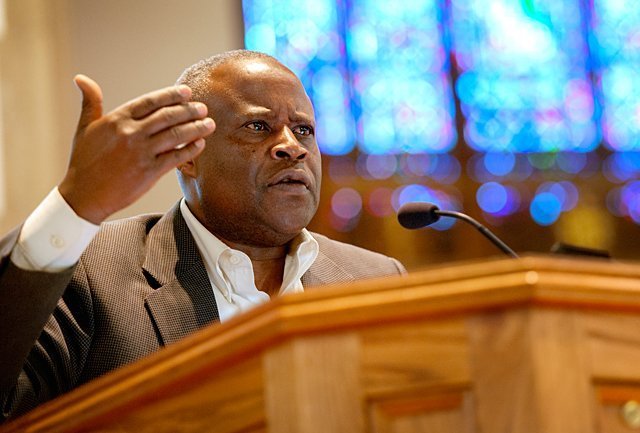 Theologian, author, and speaker Father Emmanuel Katongole talks about his native Uganda during an April 8 lecture at Nazareth College.

Pope Francis’ concern for the poor and his promotion of mercy are well-known worldwide. Thus, early in the spring of 2015, many Vatican watchers thought the first encyclical penned solely by Pope Francis would focus on either mercy or care for the poor, according to Father Emmanuel Katongole, associate professor of world religions and the church at the University of Notre Dame.

In May 2015 Pope Francis released the encyclical, titled, "Laudato Si’: On Care For Our Common Home," and through this encyclical on the environment, the pope actually highlighted the connection between mercy and care for the poor, Father Katongole said.

"Mercy and tenderness and the poor go hand in hand," Father Katongole said during an April 8 lecture at Nazareth College.

Father Katongole was one of four speakers who gave presentations on the Pittsford campus as part of the school’s annual Shannon Lecture Series on religious issues. On April 7 Father Katongole, who is from Uganda, led a discussion on tenderness, which he said is another word for mercy. The next day he spoke about the relationship between mercy, the environment and the poor in his lecture "Planting Tenderness: Laudato Si’ and the Bethany Land Institute in Uganda."

"We aren’t facing two separate crises, one environmental crisis and the other social, but rather one complex crisis which is both social and environmental. The two are deeply connected," he said.

The environment is affected by a host of complex political, economic, social and cultural issues, Father Katongole said. Pope Francis has paid attention to all these different issues and states in his encyclical that a wound caused by sin lies at the heart of the current environmental crisis.

"What is the wound, what is the sin? It’s that we have forgotten that we are sinners, dust of the earth," Father Katongole said. "We have forgotten what it means to be creatures. We have distanced ourselves from the story of creation in which we were made as creatures."

Many times in today’s society, people look down upon those whose hands are soiled from working with the dirt of the earth, Father Katongole said. The second chapter of Genesis, however, recounts the story of God forming man out of the dust of the earth, so Father Katongole said he likes to imagine God as a farmer whose hands are dirty after working with soil. Dirt and the earth are not something to be looked at with disdain, he added.

The first, called Mary’s Farm, is a demonstration and teaching farm where Ugandans from rural areas will learn small-scale, sustainable farming practices. These students, called Bethany Caretakers, will live on the farm for a year and also will learn the business skills they’ll need to run a small farm and after finishing the program will return home to set up their own model farms and hopefully be leaders in their communities, Father Katongole said.

The second component of the institute is Lazarus’ Trees, a portion of the institute’s land that will be replanted as a forest. Father Katongole hopes to have 1 million trees planted by 2050, and the forest also will be home to an educational center that will promote ecological literacy and reforestation.

The third and final component is Martha’s Market, which will include a roadside market, a retreat center and rest stops complete with restaurants and bathrooms. This business arm of the institute also will train students in principles of business and entrepreneurship and organize farm tours and festivals.