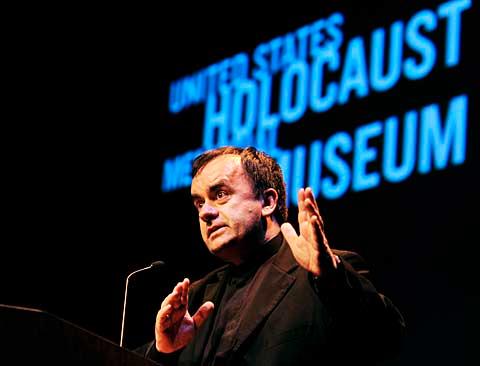 Father Patrick Desbois, who heads an initiative to locate mass graves of Jews killed by Nazis in Ukraine and Belarus, speaks at Nazareth College Sept. 28.

PITTSFORD — One by one, photographs of elderly people with pained or somber expressions were featured on a large screen. As they walked around their remote Eastern European villages, they pointed at seemingly ordinary terrain — when, in fact, the grounds had been used to bury countless Jews executed by Nazi forces.

The priest who visited these peasants, Father Patrick Desbois, told his audience that the natives had been witness to nearly unspeakable mass murder. And yet, for several decades nobody had sought to learn more about their experiences.

"You know what they ask me when I arrive in a village? ‘Father, why did you come so late?’" Father Desbois remarked during his Sept. 28 presentation, "The Holocaust By Bullets," at Nazareth College Arts Center. Approximately 400 people attended the lecture, which was sponsored in part by the Diocese of Rochester.

The past decade has seen Father Desbois feverishly seeking to locate mass-murder sites and graves of Jews killed during World War II — not those who died in concentration camps, but from the comparatively less documented shootings that took place in rural parts of the Ukraine and Belarus between 1941 and 1944. In fact, Father Desbois said that up to one-third of the 6 million victims of the Holocaust died in this fashion.

The French priest has deduced these statistics through numerous trips to the villages with an interview and search team. By knocking on the doors of non-Jew natives and asking what they know about the shootings, he has amassed testimony from hundreds of eyewitnesses. Through their assistance, he said he’s been able to locate the sites of 650 mass graves for approximately 1 million Jews who were "buried like animals, shot like animals," he remarked.

Using metal detectors, he and his team have recovered from the grave areas such evidence as German gun cartridges and bullets as well as victims’ jewelry. Equally important are videotaped testimonies of witnesses who have told their stories for the first time; he said it’s vital for him to reach as many as possible before they die out.

Father Desbois said the witnesses recalled such awful sights as Jews being forced to dig their own graves before being shot; the execution of sometimes hundreds of Jews in a single day; and victims being buried alive when bullets ran short, which resulted in villagers actually seeing the ground move. One woman related that she had a Jewish fiancée who one day came to tell her that he could not marry her — his mother was among those who had been rounded up by Nazi forces, and he was opting to accompany her to their shooting deaths. Some Jews escaped the firing squads initially, but fared no better in the end: One woman said she saw three people gunned down in her garden and she took the responsibility of burying them. Another woman found a mother and three children begging at her door for food; a Nazi officer hunted them down and shot all four people dead right in front of her.

Father Desbois, 55, began his landmark Holocaust initiative in 2001. He said he was inspired to do this project after having visited the Ukraine where his grandfather had been imprisoned in World War II, only to discover that little to no commemorations were made of the Jewish victims in Ukraine and Belarus. Furthering the lack of public knowledge was the existence of the Iron Curtain for several decades, rendering inaccessible the eyewitness accounts and government records regarding these massacres.

The Sept. 28 appearance by Father Desbois also included introductions by Daan Braveman, president of Nazareth College; and Paul Shapiro, director of the Center for Advanced Holocaust Studies at the United States Holocaust Memorial Museum in Washington, D.C. The museum works in tandem with Father Desbois and Yaha-In Unum — the organization he founded in 2006 that is dedicated to the ongoing process of collecting information and data about the killings in Ukraine and Belarus.

Father Desbois spoke of the need for people everywhere to reflect on genocides not only during World War II but also more recently in such countries as Rwanda and Cambodia. He implored the audience to take these issues seriously and pass on the stories of these horrors to the next generation so as to prevent them from reoccurring.

"The future of the planet is in front of us," he concluded.