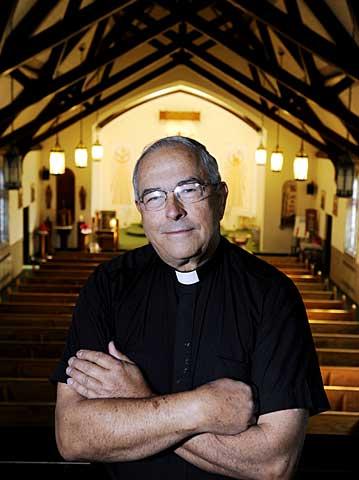 When Larry Gross was in eighth grade, a priest at his school — Holy Family in Rochester — asked him if he had considered the priesthood. That question — combined with his parents’ devoted example and his older brother’s religious vocation — helped motivate him to enter the seminary.

Forty-three years after being ordained and on the cusp of retirement, Father Gross said he would do it all over again.

"Every place I’ve been, and every pastorate I’ve had, and working at Bishop Kearney High School, have helped me to grow," said Father Gross, 69, who in June will retire as pastor of St. Rose in Lima and St. Paul of the Cross in Honeoye Falls. His parishes will celebrate a retirement party for him at 4 p.m. Sunday, June 13, at Lima Country Club.

He then served as assistant pastor at the two-year-old Holy Name of Jesus Parish in Greece from 1966-71. He recalled those days, which were just after the Second Vatican Council, as a time of rapid change that was embraced by Holy Name’s pastor, Father Tom Reddington. Father Gross said he played guitar for the parish’s folk group.

After his time at Bishop Kearney, he served as associate pastor of St. Thomas the Apostle Parish in Irondequoit (1982-83). His first pastorate was at Rochester’s Holy Apostles Parish (1983-92), where he focused on repairs, renovations and improving the parish’s finances.

"I just got the people working with me," Father Gross recalled.

He also served as pastor of Good Shepherd Parish, Henrietta (1992-95), and at Guardian Angels Parish in Henrietta for six months. In late 1995, he became pastor of St. Paul of the Cross in Honeoye Falls and helped prepare parishioners to cluster with St. Rose in Lima in 1999.

The two parishes now share a parish council and Mass schedule, and are preparing to share a pastoral leader with St. Agnes in Avon beginning in June.

"My goal for my 43 years is my interest in and my love of the liturgy, and at all of the places I’ve been, that’s the thing that has helped these parishes to grow: making this truly a celebration and helping people understand what it’s all about, the centrality of the Eucharist," Father Gross said. "I truly believe in it. That’s the source of our common strength and our community."

After his retirement, Father Gross said he plans to ease back into assisting and spend time on his hobbies: woodworking, golf and model railroads.