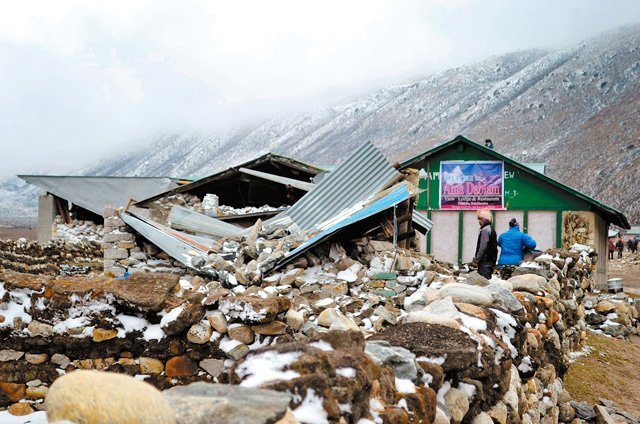 People stand near a damaged lodge in the village of Pheriche, Nepal April 26, just one day after a devastating earthquake struck the country. The photo was taken by Father Edison Tayag, who was hiking in the region when the quake occurred.

When a devastating earthquake shook Nepal on April 25, Father Edison Tayag thought perhaps his time on earth was about to come to an abrupt end.

The priest, who is pastor of Catholic Community of the Blessed Trinity in Wolcott, Red Creek and Fair Haven, had departed Rochester April 16, bound for an adventure-filled vacation in Nepal. An avid backpacker, Father Tayag had arranged to trek from the town of Lukla to Mount Everest Base Camp, but when he landed in Lukla April 17, he had no idea just how much adventure he was about to experience.

The first few days of the journey were enjoyable and uneventful, Father Tayag said. On April 25, he and his companions traveled through Thokla Pass, which contains memorials and tombstones for many who unsuccessfully attempted to climb Mount Everest, and he was due to reach Mount Everest Base Camp the next day. His group was nearing the village of Lobuche when the magnitude 7.8 quake struck around noon. Father Tayag said he at first thought the movements he felt beneath his feet were the result of a guide playing tricks on the trekkers. When the tremors became stronger and more sustained, however, he realized he was feeling an earthquake.

"The tremors lasted for probably 10 seconds, and after that is when I really felt afraid. We were up in the mountains and then you heard the sound of thunder, and my first instinct was, there’s an avalanche coming," Father Tayag said.

"Although we could hear what might be happening in the mountains, we really couldn’t see whether there was something coming down to us. Instinctively we ran, not knowing if we were running to find safe ground or running to meet our death," he said. "Fortunately there were no avalanches where we were."

Father Tayag and the other trekkers in his group made it to Lobuche, and upon entering the village they realized the magnitude of the earthquake they’d felt. Many homes had been flattened, and some lodges were missing walls. By late afternoon strong aftershocks were shaking the village, causing the hikers to frequently run outside of the unstable lodge they’d sheltered in. Around the time the aftershocks started, the first groups of hikers who’d been at Mount Everest Base Camp started to arrive at the lodge. These first climbers told stories of their groups’ close calls but ultimate survival, but as the evening wore on and more climbers trickled in, the nature of those stories started to change and those at the lodge learned that 200 climbers from the base camp were missing, Father Tayag said.

"It was very emotional," said Father Tayag, who still does not know the status of a porter and a guide he met and formed friendships with early in his own trek.

That evening Father Tayag posted a brief update on Facebook to let his family members, friends and parishioners know he was alright. That would be his last contact with the outside world for several days, as the phone lines and Internet service in the area soon went down. Before the service was lost, however, several climbers learned that the mountain’s snowy and cloudy conditions were forecast to continue for the next few days. In light of that information, Father Tayag and those in his group decided to turn around and head back down the mountain.

"Most of us really thought it was safer to just descend. We felt that it was insensitive to continue with the trek, and if we’re not going to help with the rescue operation, let’s not be a hindrance," he explained.

Father Tayag’s decision also was influenced by his love and senses of responsibility for his parishioners back home at Blessed Trinity, many of whom left comments on Facebook to tell him they were praying for him. He wasn’t able to log onto Facebook again until several days later when he was en route to the United States, yet said he was touched by his friends’ concern.

"I think as a pastor, I can’t be irresponsible and say, ‘This is an adventure. Let’s proceed.’ I have a family that’s been entrusted to me. I need to be mindful of them," he said.

As his group descended the day after the quake, the air above them hummed with a steady stream of helicopters heading up the mountain and back down again, first carrying survivors and later, the bodies of deceased climbers. Watching the helicopters lower those bodies to the ground filled Father Tayag with sadness for the victims and their families and gratitude for his own life.

"During the time of the earthquake and when I thought we were going to experience an avalanche, I just had to say to myself, ‘This might be it. I really hope I’m ready.’ I think in a very weird way you just start to be thankful for being alive, and if the end is coming right then and there, then thank you God for the amount of time you gave me to live, and if at this time you want me back, then so be it," he recalled.