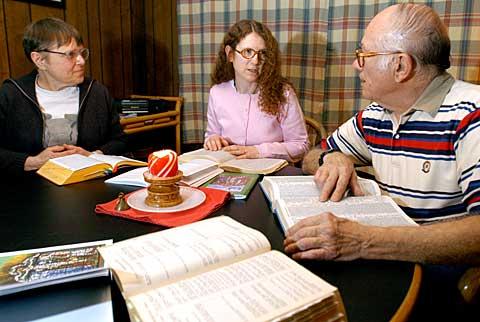 "Evangelization," "mission" and "discipleship" were some of the terms dissected by Father Anthony Gittins May 12 during the sixth-annual Gathering of the Ministerium. Above, parishioners of Irondequoit’s Christ the King Parish take part in the parish-based evangelization program Disciples In Mission in 2006.

HENRIETTA — For all of his vast academic background, Father Anthony Gittins could reduce his blueprint for living as a Catholic to one simple point: Think from God’s perspective, rather than a human one.

"The church has been at its best historically when it has listened to God’s mission — and at its worst when it thinks it’s the mission," Father Gittins remarked to nearly 400 people during the sixth-annual Gathering of the Ministerium, held May 12 at the Doubletree Hotel. The event was titled "Spirit Alive: Go Forth and Make Disciples of All Nations."

Father Gittins, a priest of the Congregation of the Holy Spirit, spent a portion of his keynote address dissecting such terms as "mission," "evangelization" and "discipleship." For instance, he emphasized that the Catholic Church should be squarely focused on God as the mission, with the church serving as the instrument by which that mission is carried out — as opposed to us deciding the mission.

He added that discipleship is intertwined with mission and evangelization, with true disciples being committed to advancing Jesus’ teachings. In fact, he observed that disciples by their very definition are learners. However, Father Gittins also said that the willingness to be taught is often a sticking point, noting that Jesus was constantly at odds with people who felt they were already too schooled in religious matters to bother with his teachings. Father Gittins commented that such people "self-exclude from discipleship because they’ve already learned, and feel they have nothing to learn. So disciples don’t have to be theologians, and not all theologians are disciples."

Father Gittins further observed that an essential component of discipleship is the willingness to listen, citing Jesus’ numerous pleas throughout the Gospels for the crowds to open their ears to his words. Then again, Father Gittins observed that folks may well have not enjoyed hearing what the cost of discipleship is — something that still holds true today, because to proclaim and bear witness to your faith could entail leaving your comfort zone and shaking other people out of theirs.

"A lot of people want to be called Catholics, want to be Christians, but they do not want to be disturbed — ‘I want to do good things, but I want to do things for God on my terms,’" he said.

Father Gittins’ remarks on May 12 were presented to people who serve in various leadership positions across the diocese. Participants at the Gathering of the Ministerium are invited by Bishop Matthew H. Clark and include priest and deacons as well as women religious, pastoral administrators, pastoral associates, religious-education coordinators, youth ministers, hospital chaplains, campus ministers, prison chaplains, Catholic-school principals, parish volunteers with significant ministerial responsibilities and diocesan employees.

Each Gathering of the Ministerium features one or more keynote speakers of national stature. Father Gittins, a native of Great Britain, has taught theology and cultural anthropology since 1984 at Catholic Theological Union in Chicago. He is the author of numerous books and also served as a missionary in Sierra Leone, West Africa, for nearly a decade. In addition, he has extensive experience as a hospital chaplain and ministering to homeless women.