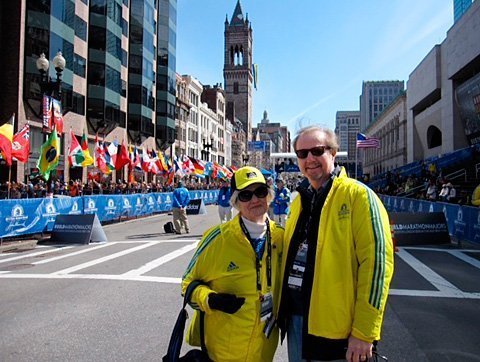 Father Robert Bourcy (right) and Sally Koen volunteered near the finish line at this year's Boston Marathon and saw the aftermath of the deadly bombings.

The morning and early afternoon of April 15 proved just as exhilarating as ever for Father Robert Bourcy, a longtime volunteer at the Boston Marathon. Stationed at the finish line in downtown Boston, he enjoyed watching the wheelchair competitors come in first, followed by the top women’s finishers, then the top men.

"There are always wonderful crowds. They cheer everybody who crosses the finish line; they go wild. Things were going fine," said Father Bourcy, pastor of St. Catherine of Siena Parish in Mendon.

Meanwhile, Tom Ketchum was basking in the glory of having completed his first Boston Marathon. A physical education teacher at All Saints Academy in Corning, Ketchum ran the famous 26.2-mile course in 3 hours and 10 minutes.

But about an hour after Ketchum finished, all of the day’s positive vibes were wiped out. Two bombs detonated near the finish line a few seconds apart at approximately 2:50 p.m., while the race was still going on. According to published reports, the blasts killed three people and injured at least 175 more, many severely.

Father Bourcy said he was about to emerge from a nearby hotel after taking a break when the bombs went off.

"I saw some people down on the ground. People were running, crying, screaming. I saw a medical worker carrying a young child into an ambulance," recalled Father Bourcy, who was uninjured and had been stationed across the street from the main devastation. "There was a lot of commotion; it was really chaotic."

Father Bourcy noted that Todd Koen, the captain of his volunteer group and a longtime friend, urged him to clear the area along with Koen’s mother, Sally, who also was volunteering. Koen, a firefighter in nearby Cambridge, Mass., stayed behind to help tend to the emergency situation. Father Bourcy and Sally Koen reached a hotel where they were ordered to stay inside for the next few hours.

"They weren’t letting anybody out, because who knew what was going to happen next?" Father Bourcy explained.

Whereas Father Bourcy was an eyewitness to the devastation, Ketchum was already heading out of Boston with his family when the bombings occurred.

"I feel heartbroken for all the victims. I will keep them in my prayers for a long, long time," Ketchum said. "This is very difficult to talk about because of the families that are going through this tragedy."

"It was shock — the realization that people have been hurt," Father Bourcy added. "I just felt, like, depleted — how did that happen, why?"

Father Bourcy said he was especially moved upon seeing a first Communion photograph of 8-year-old Martin Richard, one of the three who died. "I felt so sad, the tears came to my eyes," he said. "The number of injuries, people who lost a limb — it’s just overwhelming."

As a runner, Ketchum felt badly for the many competitors who couldn’t complete the marathon because the race had to immediately be shut down.

"I understand the months of training they do, the sweat, the tears — all for not to finish," he said. "Training and running marathons, I believe, is the toughest thing you can do because of what it does to your body both physically and mentally. It is the Super Bowl for runners. It is just not fair."

Despite the tragic event, Father Bourcy — who for the past 27 years has volunteered at most of the annual Boston Marathons — is determined to return. "I really want to be there next year, of course," he said, noting that he’s seen interviews of many Boston Marathon runners expressing similar resilience.