Priest said he's here to stay - and give back - Catholic Courier 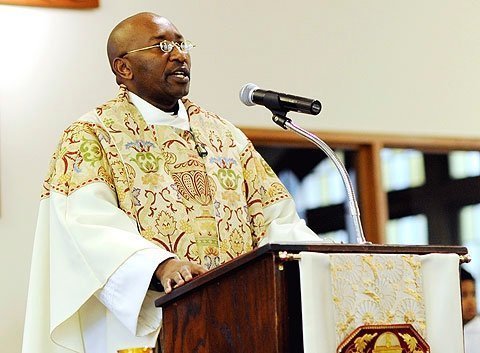 Father Paul Gitau gives the homily during a Mass at Rochester’s St. Bridget Church in 2010.

Father Paul Gitau, 49, said the reason he is a priest today is because of the priests and women religious from Europe and America who taught him as he grew up near Nairobi, the capital city of Kenya.

An Irish priest, for instance, helped him pay his school fees.

That is why Father Gitau is here in America — and why he recently sought permission to stay here permanently, he said.

"We not only receive, we also give back what we received from Europe and America," he said.

Now settled in after a year as pastor of St. Paul Parish in Webster, Father Gitau has had several reasons to celebrate this year.

In addition to Father Gitau, three other priests were incardinated in May: Kenya native Father Augustine Chumo, pastor of St. Joseph the Worker Parish in Clyde, Savannah and Lyons; Nigeria native Father Malachy "Eloo" Nwosu, pastor of the Northern Tompkins County cluster of All Saints Parish in Lansing, Holy Cross in Dryden and St. Anthony in Groton; and Father Jesus Flores, a native of Mexico and diocesan coordinator of migrant ministry.

He said St. Patrick in Thika was a large parish with about 12,000 parishioners, seven churches and 11 Masses each weekend. There also were 400 to 500 children in its Sunday school, a large number of people with HIV and AIDS, and many who were hospitalized or homebound.

He applied and was accepted to a university in the United States, but the school was not able to offer him financial aid or housing. Instead, the former Archbishop of Nairobi, Archbishop Raphael S. Ndingi Mwana’a Nzeki, suggested he consider St. John Fisher College, from which the archbishop had graduated in 1969. Father Gitau was accepted and received a scholarship and began studying at the school in August 2003.

He was appointed pastor of St. Paul in Webster in 2011, and he said he has found St. Paul to be a very active parish.

"Most of the people here feel they are called not only to worship God, but to serve in many different ministries," Father Gitau said.

He has taught his parishioners a few words in Swahili: jambo, which means hello, and hakuna matata, which means no worries.

"One of my goals is to promote servant leadership," he said, noting that he aims to provide an example of a servant leader for his flock.

Deb Housel, a support ministry liaison for the diocesan office of Parish and Clergy Services, said she saw his willingness to help out shortly after they became coadministrators of a cluster of city parishes in 2010 that were combining to form St. Frances Xavier Cabrini Parish. At that time, one of Father Gitau’s three sisters was tragically killed in a car accident in New Jersey. Immediately after, the priest went to stay with his brother-in-law, helping him care for his two young children.

"He played the role of a very good father to these two children," said Deb Housel. "He is a good father in all respects."

"He very much looks to raise the community up," Housel said. "He’s got a wonderful sense of humor. I would call him a happy priest. He’s very happy in his priesthood, and he was very complementary to me as a pastoral leader. He respected my role and so we would complement each other’s strengths and weaknesses."

Forest Shick of Webster recalled meeting Father Gitau at a finance committee meeting for St. Bridget Parish. Thanks in part to Father Gitau’s listening skills, and Shick’s willingness to do whatever was needed at the parish, the two became close friends, Shick said.

Shick said he is glad to know that Father Gitau’s stay in the United States has permanence.

"You always wonder ‘When is he going to go home?’" he said. "And now it’s like he’s here. Unless something happens at home, he’ll probably be here. It’s a good feeling."