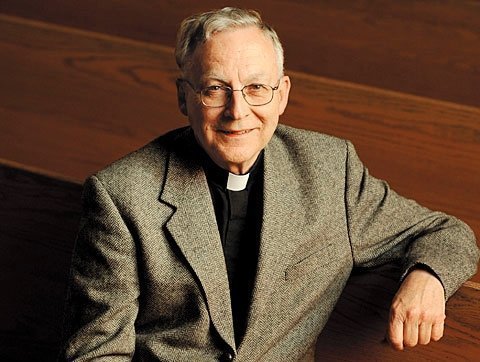 Father William Michatek was a newly ordained priest when he arrived at St. Lawrence Parish in 1966. He was eager to take on his first assignment as assistant priest at the Greece parish, but his enthusiasm waned a bit when he learned his predecessor had been chaplain of the North Greece Fire District, which expected him to become its chaplain as well.

The firefighters were persistent, however, and eventually the young priest agreed to be their chaplain. Much to his surprise, Father Michatek discovered he loved working with the fire department, and that love didn’t fade when he left North Greece in 1969.

"In every parish I went to I joined the fire department," he added.

The second fire department Father Michatek worked with was the Webster Fire Department, which he joined after becoming assistant pastor at Webster’s Holy Trinity Parish in 1969. He maintained close ties with the firefighters there even after he left Holy Trinity to become associate pastor at St. John of Rochester in Fairport in 1975.

"Once you become a member of the fire department you belong forever," he noted.

Father Michatek became more active in the Webster Fire Department, however, when he returned to the area in 2003 to become pastor at Holy Trinity. The Webster parish was a big part of his early years as a priest, and it’s also been an important part of his final years in active ministry, as Father Michatek will retire at the end of June. Bishop Matthew H. Clark will visit Holy Trinity on June 19 for a 10:30 a.m. Mass celebrating the parish’s 150th anniversary, as well as Father Michatek’s upcoming retirement and the 45th anniversary of his ordination. A gala celebration will be held in the parish’s Murphy Hall after the Mass.

Father Michatek grew up attending St. Helen Parish in Gates and studied at St. Andrew’s and St. Bernard’s seminaries in Rochester. Bishop James E. Kearney ordained him June 4, 1966, at Rochester’s Sacred Heart Cathedral. After serving at St. Lawrence, Holy Trinity and St. John of Rochester in the early years of his priesthood, Father Michatek spent a year as associate pastor at Holy Ghost Parish in Gates before becoming pastor at St. Michael in Penn Yan and St. Andrew in Dundee in 1982. While there, he also ministered to inmates at the Yates County Jail.

He left that pastorate in 1994 and became pastor at St. John the Evangelist in Spencerport. He led that parish for nine years before returning to Holy Trinity in 2003, more than 40 years after his first stint there. The children he baptized at Holy Trinity now are middle-aged, and many of the adults he knew back then now are in their 80s. When priests arrive at new parishes, they meet the young families quickly through sacramental-preparation classes, but it takes more time to get to know the older parishioners, Father Michatek said, noting that at Holy Trinity he has a head start because he already knows many of the older parishioners.

"It’s kind of a nice experience to go back after so many years of absence. I’m kind of a familiar face," said the priest, who had occasionally returned to the parish for weddings and funerals before being reassigned to Holy Trinity.

Father Michatek said his 45 years of parish ministry have passed quickly and been enjoyable.

After retiring, Father Michatek plans to move to his cabin in Port Bay, which is near Wolcott, and help out at Holy Trinity as well as at parishes in eastern Wayne County.