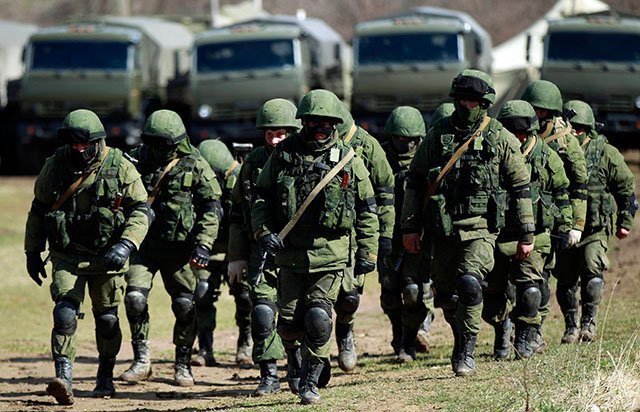 Armed men, believed to be Russian soldiers, march at their camp near the Ukrainian military base in Perevalnoye outside Simferopol, Ukraine, March 17, the day after pro-Russian voters on the Crimean peninsula voted to secede from Ukraine in a referendum the United States and European Union called illegal.

"The situation remains very serious, and we don’t know what will happen — the new government here is portraying us all as nationalists and extremists," said Father Mykhailo Milchakovskyi, a parish rector and military chaplain from Kerch, Crimea.

He said officials from Russia’s Federal Security Service, or FSB, had called him in for questioning about his community and to ask whether he "recognized the new order."

Father Milchakovskyi told CNS that he and his family and at least two-thirds of his parishioners had left Kerch for Ukrainian-controlled territory on the advice of Ukrainian Archbishop Sviatoslav Shevchuk of Kiev-Halych.

"All my parishioners are patriotic Ukrainians who love their Crimean homeland. But Russia is now seeking to drive us out," he said March 25.

He said Father Mykola Kvych, pastor of the Dormition of the Mother of God Parish in Sevastopol, Crimea, also fled after being detained and beaten by Russian forces, who accused him of "sponsoring extremism and mass unrest."

"During 10 years in Sevastopol, he never said or did anything against Russians," Father Milchakovskyi added.

"We’re determined our church will not close up and abandon its mission, and we hope we’ll be given permits to return. But like others, we’ve had to leave our life and work behind, not knowing when we’ll be back. This is a time of suffering and anxiety."

"For now, this is just a temporary evacuation until conditions are safer, but with tension and pressure now strong, many of us are afraid of being arrested," Father Milchakovskyi said.

"People want things to stay as they are, with freedom of religion, assembly and speech. But if they’re forced to accept Russian passports, they’ll have little choice. Our only hope lies with God and human goodwill."

The Ukrainian Catholic Church, a Byzantine rite, was outlawed under Soviet rule from 1946 to 1989, when many clergy were imprisoned and most church properties seized by the state or transferred to Russian Orthodox possession.

The church’s five communities in Crimea traditionally make up around 10 percent of the peninsula’s 1.96 million inhabitants, 58 percent of whom are ethnic Russians. Ukrainians make up 24 percent and mostly Muslim Tartars a further 12 percent.

Father Milchakovskyi told CNS that Crimea’s Russian Orthodox Church appeared ready to seize Ukrainian Catholic properties and said all but one Catholic priest and deacon had now left to escape "interest from the FSB and Russian forces."

In a March 19 letter to Ukrainian Catholic clergy in Crimea and neighboring Odessa, Archbishop Shevchuk said he was aware many priests now faced "inconveniences, pressures and threats" with their families, adding that he hoped they would have "bravery and courage, steadfastness and strength" to continue their work.

"To carry on your service, you will have to overcome impediments which, until very recently, were hard for any of us to imagine. You are being called ‘Vatican agents’ and are being solicited to renounce the Catholic Church," the archbishop said.

"These attacks are nothing new. In them we trace an echo of everything our martyr-church experienced in the not-so-distant communist past," he said. "However, we know God’s providence turned into good those repressions and persecutions."

Meanwhile, Ukrainian newspapers said two Byzantine Catholic churches and a monastery had been burned between March 15 and 26 in Ivano-Frankivsk, Dora and Kolomyya, adding that the current crisis could severely damage Catholic-Orthodox ties.

Father Milchakovskyi said he hoped Russian Orthodox leaders would be "interested in maintaining religious freedom" in Crimea, but added that Ukrainian Catholics now had "no wish for contacts with them."

"We don’t trust them — they’re unfriendly, imperialistic people, who are being helped by the FSB and who’ll want the new order to ensure their religious monopoly," the priest told CNS.

Father Milchakovskyi said he had spoken by telephone March 25 to Ukrainian soldiers previously under his spiritual care, who had been forced to surrender their uniforms and insignia after evacuating their base at Kerch.

He added that most were unsure whether they would be "treated as heroes or put on trial as deserters and traitors" after returning to the Ukrainian mainland.

Archbishop Shevchuk has asked priests to dedicate Ukraine to Mary’s protection April 6, to help calm "hearts filled with anxiety for the future."