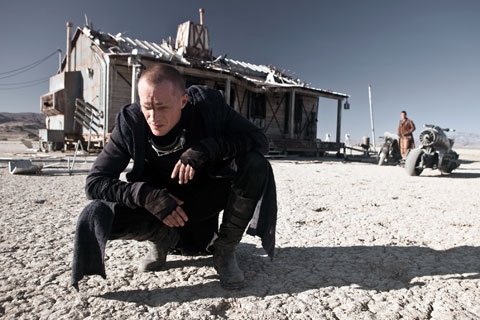 NEW YORK (CNS) — "To go against the church is to go against God." Such is the slogan of the distorted version of the Catholic Church, which is portrayed as holding Big Brother-style sway over society in the malign futuristic horror exercise "Priest" (Screen Gems).

Not surprisingly, everything in this screen version of Min-Woo Hyung’s series of graphic novels — adapted by director Scott Stewart and screenwriter Cory Goodman — sends the opposite message: to rebel against the corrupt, evil force of the totalitarian church is a duty, a source of honor and the beginning of individual liberation.

Discovering that supposed truth is the otherwise nameless main character of the title (Paul Bettany). A tough veteran of the apocalyptic war which saw the church helping humanity to defeat a race of brutally aggressive vampires, this consecrated warrior, like all his comrades, has fallen on hard times since the coming of peace.

Not so his religious superiors — a council of elderly gents somewhat absurdly termed the Monsignors — who have parlayed the successful outcome of the crusade against bloodsuckers into an iron grip on all aspects of life. As led by Msgr. Orelas (Christopher Plummer — a long way from his days as the devout Baron von Trapp) they specialize in suppressing disagreeable realities.

So when Priest requests permission to go to the rescue of his niece Lucy (Lily Collins), who has been abducted during a fresh outbreak of bloodsucker violence, the Monsignors turn him down flat. The war is over; the victory was absolute. To admit that Lucy has been kidnapped by vein-drainers would be to shake the populace’s confidence in the church’s ability to provide them with perfect security.

But off on his quest Priest goes nonetheless. Along the way, he allies himself with Lucy’s boyfriend Hicks (Cam Gigandet) and gains the help of a priestess called, um, Priestess (Maggie Q), whose disenchantment with the hierarchy is similar to his own. Together they battle to thwart the ambitions of Black Hat (Karl Urban), a new, seemingly invincible chieftain of the undead.

Incidental to the plot, but not to the feelings of Catholic viewers, is the borderline blasphemous depiction of sacramental practice. Thus, confession via electronic screens is one method of enforcing clerical control; Mass prayers drawing parallels between the blood of Christ and the ordinary variety sought by the vamps is another.

As Priest’s loyalties shift, he half-heartedly recites the act of contrition, saying in effect, that he would like to renounce sin, "but I can’t." There is also a disturbing appropriation of cherished Christian symbols to this project’s often violent ends, with both crosses and rosaries serving, at various times, as weapons in combat.

The film contains pervasive anti-Catholicism, sometimes approaching sacrilege; much morbid, occasionally bloody violence; at least one use of profanity and of the F-word; and a few crude and crass terms. The Catholic News Service classification is O — morally offensive. The Motion Picture Association of America rating is PG-13 — parents strongly cautioned. Some material may be inappropriate for children under 13.