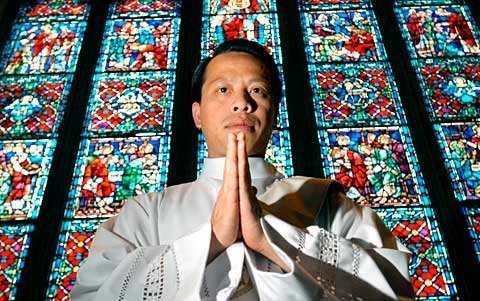 It is common for priests newly ordained in American dioceses — such as Father Hoan Dinh (above) — to be in their 30s or older, and to have been born outside of the U.S

Father Richard Brickler was 25 years old when Bishop James E. Kearney ordained him a priest on June 3, 1961. A Rochester native, Father Brickler had remained in his hometown while he attended first Aquinas Institute, then St. Andrew’s Minor Seminary and St. Bernard’s Seminary.

Father Hoan Dinh was 37 years old when Bishop Matthew H. Clark ordained him to the priesthood June 30, 2007. Father Dinh grew up in Vietnam, where he began discerning his future vocation to the priesthood at the age of 19, three years before he came to America. He first visited the Diocese of Rochester in 2001, and soon became a diocesan seminarian, studying at the American College of the Immaculate Conception at the Catholic University of Louvain, Belgium.

The paths to priesthood taken by these two men are quite different, but both priests’ journeys are representative of the time periods in which they were ordained. Today it’s quite common for priests newly ordained in American dioceses to be in their 30s or older, and to have been born outside of the United States, according to a number of studies.

Father Brickler said most of his seminary peers during the late 1950s and early 1960s were about the same age he was.

"Most people around ordination were around 25. There were some who had been in the service or been at college or had done other things and were older, but most of us were around 25 or 26," said Father Brickler, pastor of St. Boniface Parish in Rochester.

By 2005, the average age of newly ordained priests had risen to 37, according to a 2006 report by Dean Hoge, a sociologist at Catholic University of America in Washington, D.C. By 2009, however, the average age had taken a slight dip, with priests ordained that year averaging 36 years of age.

"The (new priests) seem to be coming in their 30s or a little older than we were, and they’ve already had many different kinds of experiences by the time they decide to come into the seminary," Father Brickler observed.

Father Fennessy, for example, earned a bachelor’s degree in meteorology and worked at a lumber company for more than 10 years before he became a priest. Father Loncle had earned two master’s degrees and was pursuing a doctorate in political science before he entered the seminary, and Father Edison Tayag worked as a physical therapist for several years before he was ordained in 2008 at the age of 34.

"Many young fellows discern a possible vocation to the priesthood as they are working in their careers they have studied in college," affirmed Father Timothy Horan, director of the diocesan Office of Priesthood Vocations Awareness.

In fact, formal discernment within the Diocese of Rochester doesn’t begin until interested young men are at least 20 years old, when they are eligible to begin living at Becket Hall, the diocesan residence for men discerning a possible call to the priesthood, Father Horan said. The diocese encourages men to earn their bachelor’s degrees before embarking on the path to the priesthood, he added.

Yet that doesn’t mean the diocese discourages young men in high school from considering the priesthood, Father Horan clarified. He and other members of the Office of Priesthood Vocations Awareness hold regular dinners for such young men and keep in contact with them as they complete their educations.

While completing his own education, Father Dinh shared seminary classrooms in Louvain with students from Vietnam, the Philippines, Venezuela, Mexico and Eastern Europe. Many of these seminarians also were planning to become priests in American dioceses, he said.

Indeed, an increasing number of foreign-born priests are serving in the United States today, according to Hoge’s 2006 report, which showed that one-sixth of diocesan priests and one-quarter of religious-order priests in America were born outside the country. Approximately half of these foreign-born priests came to the United States from Vietnam, Mexico or the Philippines, according to the report.

These percentages appear to have been rising steadily since the 1970s, when a 1972 study conducted by Father Andrew M. Greeley found that 10 percent of the priests serving in the United States were born outside the country. By 2000, however, that number had risen to 16 percent, according to a 2000 study by the Center for Applied Research on the Apostolate (CARA) at Georgetown University in Washington, D.C.

That same year, a study by the National Conference of Catholic Bishops — now known as the USCCB — found that nearly 25 percent of the priests ordained in 2000 had been born in other nations. By 2005, the percentage of new priests born outside the United States climbed to 27 percent, according to another CARA report.

Father Dinh and Father Tayag, who was born in the Philippines, both moved to America before they were ordained, but the Rochester Diocese also is home to a number of priests who came to the area after ordination. Sixteen priests currently minister in the diocese but are actually priests of their home dioceses in such countries as Kenya, Nigeria, Ghana, Mexico and Vietnam.

This situation is not unique to the Rochester Diocese, according to National Catholic Reporter‘s John L. Allen. In a phenomenon some have dubbed the "reverse mission," many priests have relocated from Africa, Asia and Latin America to Europe and the United States in recent years, Allen writes in his 2009 book, The Future Church: How Ten Trends Are Revolutionizing the Catholic Church.

Such priests oftentimes arrive in the Rochester Diocese on temporary assignments, but sometimes decide to stay and become diocesan priests through a process called incardination. Eight of the 102 active diocesan priests are international priests who have been incardinated into this diocese from dioceses in Kenya, Ghana, Sri Lanka and Poland, according to Sandy Grocki, diocesan clergy-services coordinator.

International priests often are faced with the challenges of adapting to American culture and communicating effectively with their English-speaking parishioners, who may have a hard time adjusting to these priests’ accents, Father Horan said. On the other hand, local parishioners are able to gain new insights from learning about the international priests’ backgrounds and experiences in their homelands, he added.

That enrichment is a two-way street, said Father Dinh, parochial vicar at Our Lady of Peace Parish in Geneva.

"I consider people from a different culture than mine as a mirror. Only when I am placed in front of that mirror (do) I begin to know myself better. I begin to learn about their beautiful characters and values that I was not exposed to before," Father Dinh said. "I believe that parishioners continue to teach me and minister to me in many different ways that I cannot categorize."

And although the American culture may be unique, the Catholic Church is truly universal, said Father Adam Ogorzaly, a Polish priest who was incardinated into the Rochester Diocese in 2000.

"The ministry, the preaching, the sacraments all over are the same," said Father Ogorzaly, pastor at St. Stanislaus Church in Rochester.

Priests ordained in the Diocese of Rochester within the past 10 years have been older at the time of their ordinations than were diocesan priests ordained in previous decades. Here  is a list of the most recently ordained priests, the years they were ordained and their ages at ordination.