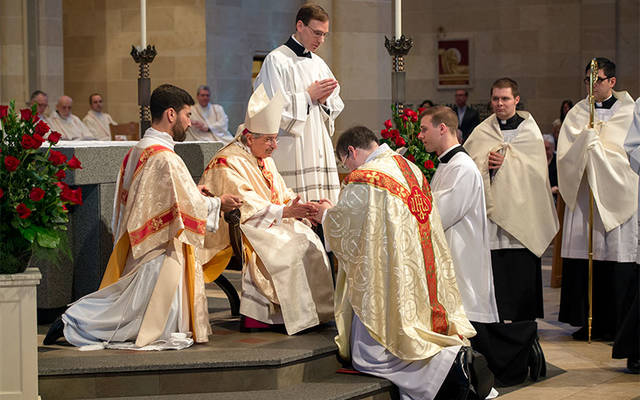 As a seminarian, Father Michael Costik could relate to his classmates’ eagerness to reach ordination.

“I was already 32, 33 when I started thinking about (priesthood), so I wanted to get on with it,” said Father Costik, the pastor of St. Benedict Parish in Ontario County who is celebrating his fifth anniversary of ordination this year. “But I’d actually advocate for a longer and slower (formation) process. ‚Ä¶ There is something to be said, when the world is too fast, that the church should be advocating for taking its time, especially when dealing with priests.”

Priestly discernment and formation consists of many steps, each of which is important in the work of molding someone to imitate and be united with Jesus to serve others, noted Father Paul Tomasso, diocesan vicar general and moderator of the curia.

The process begins with discerning a call — the feeling that God wants the man to enter the priesthood, explained Father Tomasso, who also serves as director of seminarians and director of priest personnel for the diocese.

Men who feel they are being called to be priests may then turn to their pastors, who could refer them to the diocese’s Priesthood Vocations Awareness office, overseen by Fathers Matthew Jones and Peter Van Lieshout. The vocations office offers a number of opportunities — including retreats, dinners and prayer holy hours — for discerners to meet and speak with each other, Father Tomasso said.

Men in discernment also take part in “24 Hours with the Lord,” an overnight retreat that begins the day before diocesan priests are ordained and includes attending the ordination, he added.

Through these opportunities for fellowship, the men “know that they’re not the only one in the whole universe who is discerning the priesthood,” Father Tomasso said.

Potential seminarians then go through a vetting process, which begins with a series of interviews with three priests who are on the diocese’s vocations team, Father Tomasso explained. If the team agrees that a particular man should move forward in the process, he then undergoes psychological testing. Once the vocations team reviews the results with the man and all agree that he can continue in the process, he then goes before the bishop for permission to apply to seminary.

With the bishop’s permission, the candidate begins the process of seminary application, Father Tomasso noted. In a manner similar to a college-application process, the seminary candidate must be interviewed and provide recommendations, documentation and essays before being accepted.

“If (all) goes well, they are off to seminary and their formation begins,” Father Tomasso said.

To help ensure they are following the path God has set before them, all seminarians need prayers from the entire diocese, observed seminarian Greg Sheffield of Elmira.

“We are that future that’s going to bring you to Christ through sacraments and through ministry,” he added. “No one seminarian is just that parish’s — we belong to all of you.”

The path to seminary is one of the greatest changes witnessed by Msgr. Gerard Krieg, this year celebrating his 65th anniversary of ordination, during his priestly ministry.

Msgr. Krieg said his path to seminary started in second grade when he realized he wanted to be a priest, having grown up with such influences as a great-uncle and cousin who were priests. Other influences included a visit to his home by Archbishop Edward Mooney in the 1930s when the future cardinal was bishop of Rochester.

Msgr. Krieg’s eighth-grade teacher, with whom he remained friends for many years, affirmed his vocation. At that time the diocese operated its own seminaries, and Msgr. Krieg attended the former St. Andrew’s minor seminary and then the former St. Bernard’s theological seminary.

Preparation for current seminarians begins with two years of philosophy studies, Father Tomasso said, followed by four years of theology. Diocesan seminarians attend a number of seminaries, including St. John’s Seminary in Boston, Theological Catholic Seminary at the Catholic University of America or the North American College in Rome.

In his 1992 apostolic exhortation Pastores Dabo Vobis (I will give you shepherds), St. John Paul II developed the four pillars priestly formation: human, spiritual, intellectual and pastoral, Father Tomasso noted. A seminary adviser, called a formator, keeps an eye on seminarians to see how they are doing with each of the pillars and monitor their progress in meeting their personal goals, he said.

Sheffield noted that a fifth pillar of brotherhood has been added at Franciscan University in Steubenville, Ohio, where he studied prior to entering St. John’s where he is in his third year, to stress the importance of fraternity among seminarians and priests.

Rochester seminarians also are required to take clinical pastoral education at a local hospital over one summer to hone their chaplaincy skills as they visit with families facing trauma or death, Father Tomasso said. As seminarians, they also are assigned to parishes near their schools to gain pastoral experience, he added.

Such a great amount of interaction between seminarians and parish priests is a positive change in the priestly formation process, Msgr. Krieg remarked.

“That interaction was not very great (in the past), certainly wasn’t very formal,” he noted. “(Ordination) was like going from school to ministry in one tremendous leap. It’s far better what goes on now.”

Today, new priests are assigned to large, diverse parishes so they can have a broad range of experiences with a supervisory pastor, who can serve as a mentor, Father Tomasso said. While the word “internship” is no longer used, the concept continues in the form of three-year assignments as parochial vicars for the newly ordained, he noted.

The parochial vicars meet monthly with Father Tomasso, and at times with a speaker, to receive information and have opportunities for discussions, he said. Continuing education for all priests is provided through speakers, workshops and webinars, which are held mainly at St. Bernard’s School of Theology and Ministry, Father Tomasso added.

While he felt prepared for his first assignment after ordination, Father Lee Chase said he now realizes no amount of education or formation can fully do the job of preparing a priest for everything he will encounter.

“The formation process is to prepare the individual for ministry; to give him the wisdom to be able to enter into any issue and discern what to do,” said Father Chase, who is pastor at St. Lawrence Church in Greece.

Discernment, therefore, is never truly finished, he added, even as he is celebrating his 25th anniversary of ordination this year.

“I’m always asking myself, ‘Where is God calling me?’” he said.