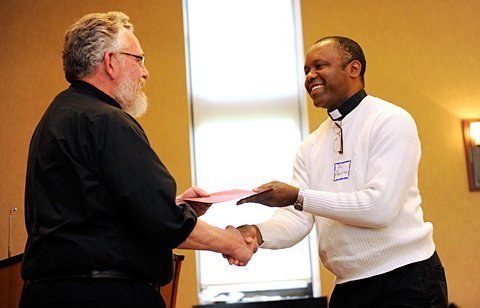 GATES — Many questions ran through Father Felix Dalimpuo’s mind when he first learned the Diocese of Rochester was going to make him take an English class.

"Why do I need this program now? Is my English so bad? Are my parishioners complaining and saying they don’t understand my English?" wondered Father Dalimpuo, a native of Ghana who has been pastor of St. Michael Parish in Newark since 2008 and previously had served in the Southern Tier for several years.

He recalled these questions during a May 13 ceremony celebrating completion of the Enhanced Communication Using North American English course Father Dalimpuo took along with 22 other priests and one transitional deacon. The priest said the course helped him learn to pronounce words correctly, emphasize the important words in his sentences, use the proper pitch and intonation when speaking, and pause in the correct places.

"It is time well spent. We may not see the fruits of what we have learned now, but as we continue to use these tools, we will really see improvement in our communication skills. The benefit of these lessons will be forever," he said during the ceremony, which took place in the Bishop Hickey Conference Center at the diocesan Pastoral Center.

Syracuse Bishop Robert J. Cunningham, apostolic administrator of this diocese, mandated the class for all priests serving here who hailed from other countries, even if those priests had been serving in this country for more than a decade, explained Betsy McDermott, project manager for the diocesan department of Parish and Clergy Services. The goal of that move was to help the priests become aware of any difficulties their listeners might have while listening to them talk or preach, and to help the priests overcome those challenges, said Bernard Grizard, director of Parish and Clergy Services.

These priests have much to offer, and their presence and support has helped to make the local church stronger and more vibrant, he noted.

"We are blessed by the gift of diversity and richness they bring into our local church. Their very presence is an expression of the universal church. It’s maybe the best way of expressing that we are not an isolated group of Catholics, but (that) to be Catholic also means to be connected with the broader world," Grizard said.

While it is a blessing that these priests have brought with them their own cultures and infused them into the local culture, this also can cause communications mishaps, he added.

"When they come here, they really do have to embrace and integrate into a different culture and a different world. We wanted to help them be better communicators and, by the same token, be better able to be understood and more successful leaders," Grizard said.

McDermott and Grizard researched several local institutions that offered English classes before choosing to go with Monroe 2-Orleans BOCES, which designed a class specifically for the priests and transitional deacon, and chose an instructor to lead the classes. Amelio Paolucci held twice-weekly classes at the Pastoral Center for 12 weeks. Paolucci said he was impressed by the diversity within his class, which comprised students from nine countries on three continents. He said he also was impressed by the enthusiasm for learning and intelligence of his students, who all hold advanced degrees.

Many different dialects, accents and speech patterns may be found throughout the United States, but this particular class focused on North American English as spoken in the greater Rochester region. The goal of the class was accent addition, rather than accent reduction, and Paolucci and his students examined the speech patterns and rhythms found in the local region. They spent some time on pronunciations, but went beyond that to look at such other factors as a speaker’s pitch and intonation, as well as the syllables or words that a speaker chose to stress.

"There are five vowels (that make) approximately 15 different sounds," Paolucci explained. "Even if you mastered all of the 15 sounds, if you’re putting stress on the wrong syllables, speaking with a non-North American rhythm or using monotone, those things make it much more difficult for me as a listener to understand your conversation. English, especially English as spoken in the greater Rochester region, is very dependent on intonation. You can pronounce all of the sounds, but if you don’t use the right rhythm or pitch, you will likely have difficulty being understood."

Paolucci’s students spent the first hour of each three-hour class learning about these elements. During the remainder of the class, the priests took turns delivering portions of the homilies they planned to give the next weekend. They critiqued each other’s deliveries and were able to put what they learned into practice immediately.

Paolucci said his students’ enthusiasm and for their vocations gave him hope for the future of the local Catholic Church.

"I have virtually no doubts that the church will be successful because it largely reflects the diverse and intelligent and enthusiastic members of the class," he said.