Priests for Life head: Vatican didn't tell him he was laicized - Catholic Courier 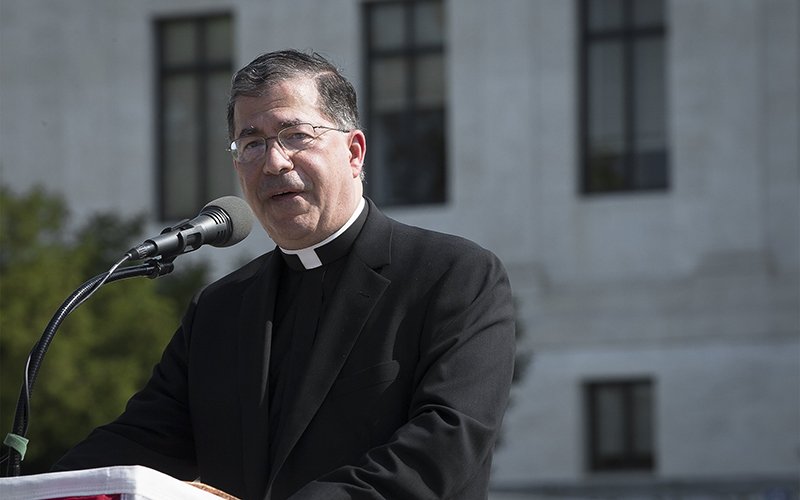 Father Frank Pavone, national director of Priests for Life, speaks in front of the U.S. Supreme Court in Washington Oct. 1, 2019. A Dec. 17, 2022, news report said Pavone had been dismissed from the clerical state for "blasphemous communications on social media" and "persistent disobedience of the lawful instructions of his diocesan bishop." (CNS photo/Tyler Orsburn)

WASHINGTON (CNS) — In a live morning broadcast on Twitter Dec. 18, Father Frank Pavone, national director of Priests for Life, said he was not told directly by the Vatican that he has been laicized.

“I’m haven’t received any communication from the Vatican, I haven’t seen anything,” he said. “I’m not even being told about this myself.”

Pavone said he learned about it from Catholic News Agency in an email asking him for comment about the Vatican returning him to the lay state.

Late Dec. 17, CNA broke the story that “Father Pavone has been dismissed from the clerical state for ‘blasphemous communications on social media’ and ‘persistent disobedience of the lawful instructions of his diocesan bishop.'”

The news outlet said it had obtained a Dec. 13 letter about the matter — “confirmed by multiple sources as authentic” — that Archbishop Christophe Pierre, U.N. nuncio, sent to U.S. bishops.

Shortly after the CNA story, The Associated Press, The New York Times and several other media outlets reported the news. In an updated news story midday Dec. 18, AP published the full text of the nuncio’s letter.

It said the head of Priests for Life head “was dismissed from the clerical state by the Holy See” Nov. 9. “This action was taken after Father Pavone was found guilty in canonical proceedings of blasphemous communications on social media, and of persistent disobedience of the lawful instructions of his diocesan bishop.”

The letter also said the priest “was given ample opportunity to defend himself in the canonical proceedings, and he was also given multiple opportunities to submit himself to the authority of his diocesan bishop. It was determined that Father Pavone had no reasonable justification for his actions.” There is “no possibility of appeal” for “Mr. Pavone,” it said.

Ahead of his Twitter broadcast, Pavone tweeted: “So in every profession, including the priesthood, if you defend the #unborn, you will be treated like them! The only difference is that when we are ‘aborted,’ we continue to speak, loud and clear.”

Pavone’s ministry has not been without controversy

Pavone and his ministry have not been without controversy over the years, and some of the biggest headlines and scrutiny his actions have drawn came in 2016 when he placed the body of an aborted fetus on an altar and broadcast it on Facebook Live on the eve of the presidential election to get people to vote for Republican Donald J. Trump.

Shortly after the broadcast, the Diocese of Amarillo, Texas, where he was incardinated as a diocesan priest in 2005, announced it was investigating the incident.

“We believe that no one who is pro-life can exploit a human body for any reason, especially the body of a fetus,” Amarillo Bishop Patrick J. Zurek said in a statement issued after the controversial broadcast. The use of an aborted fetus for political purposes by one of the diocese’s priests violated “the dignity of human life,” he added.

During Trump’s run for reelection in 2020, then-Father Pavone campaigned for him and told CNA at the time that canon law’s prohibitions against political involvement by clergy did not apply to him because he was campaigning against abortion and for the pro-life cause.

He did eventually end his role as a co-chair of Trump’s 2020 pro-life coalition and as an advisory board member of Catholics for Trump, telling CNA he stepped down “at the request of ‘the competent ecclesiastical authority.'”

In his live broadcast on Twitter Dec. 18, Pavone said he will not apologize for actively supporting Trump, “who got us to this point where we are now.” He was referring to the Trump’s appointees to the U.S. Supreme Court joining in the majority vote June 24 that overturned Roe v. Wade, the 1973 ruling that made abortion legal nationwide.

In his Twitter broadcast, he took issue with being accused of “blasphemous communications” on social media.

He admitted getting angry with a “rabid (Joe) Biden supporter” during a conversation they two were having on Twitter and he tweeted the “GD” word: “You and these goddamn baby-killing politicians.”

“I shouldn’t have used that word — I don’t usually use that word — in response to that guy,” Pavone told his listeners. “I was very angry, so I (went) to confession” afterward.

“Father Frank is damning people to hell? I don’t think so,” he said, citing several examples of “extending the mercy of God” to those who have supported abortion.

In his pastoral work with Rachel’s Vineyard, a post-abortion retreat ministry, he has extended “the mercy of God” to countless women who regret their abortions, he added. “Don’t talk to me about damning people to hell.”

Originally ordained for the Archdiocese of New York by Cardinal John J. O’Connor in 1988, then-Father Pavone took over the helm of Priests for Life a couple of years after its 1991 founding.

In 2005, Father Pavone told Cardinal Edward M. Egan, then New York’s archbishop, that he wanted to pursue his pro-life ministry full time and had been invited to do so by Bishop John W. Yanta of Amarillo, Texas, who served on the Priests for Life board of advisers. Father Pavone was incardinated into the diocese that year.

The priest appealed to the Vatican and in 2012, what’s now the Dicastery for the Clergy, issued a decree allowing Father Pavone to minister outside the diocese but said he would still have to obtain specific permission to do so from Bishop Zurek.

In 2014, New York Cardinal Timothy M. Dolan cut ties with Father Pavone and his group Priests for Life, saying the priest refused to allow an audit of the group’s finances. Priests for Life was based in Staten Island, New York.

In 2017, Priests for Life announced it had relocated its headquarters to Titusville, Florida.

In April 2020, Father Pavone told CNA he was no longer “under the authority” of the Amarillo Diocese and would not say what diocese he had moved to.

Tags: Abortion, Holy Orders
Copyright © 2023 Catholic News Service, Inc. All rights reserved. Linking is encouraged, but republishing or redistributing, including by framing or similar means, without the publisher's prior written permission is prohibited.