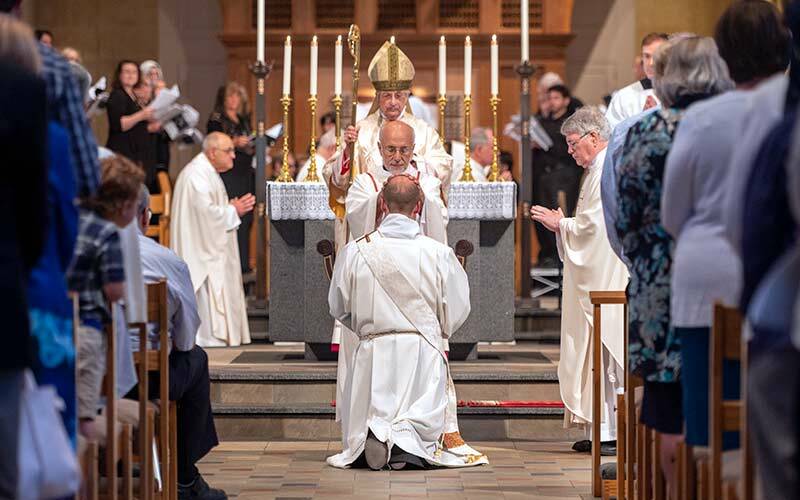 Father Anthony Mugavero places his hands on the head of then-Deacon Aaron Kelly during his ordination to the priesthood July 2 at Rochester’s Sacred Heart Cathedral. (Courier file photo)

“With these new faces, new blood, it’s a way to kind of jump-start our vocations efforts just by that very process,” Father Van Lieshout said.

The team previously had just two members — Father Van Lieshout and Father Matthew Jones — who served as codirectors of priesthood vocation awareness. Father Jones is currently on a leave of absence.

“I’m very grateful for the assistance (of the new team members), because we all have other jobs,” remarked Father Van Lieshout, who is rector of Rochester’s Sacred Heart Cathedral. “It allows no one of us to be spread too thin, and to be able to cover better the regions of the diocese.”

Father White is parochial vicar at St. Maximilian Kolbe and St. Katharine Drexel parishes in Wayne County. Fathers Coffas and Martuscello serve as pastor and parochial vicar, respectively, at Holy Cross Parish in Charlotte and Our Mother of Sorrows in Greece. But Father Martuscello grew up in Steuben County and has lots of connections in the Southern Tier, Father Van Lieshout noted.

Each of the priests on the team has his own vocation story and his own experiences, Father Martuscello noted. He said he hopes that having more team members representing more perspectives will enable the team to more effectively reach out to prospective candidates and promote vocations in the diocese.

Although Fathers Van Lieshout, Coffas, Martuscello and White are the only priests officially appointed to the Vocation Awareness Team, they are not alone in the work of encouraging vocations, Father Van Lieshout said.

“Every priest in his own assignment should be promoting vocations to the extent he is able to,” he noted.

Likewise, most priests should be able to look at the population they serve, identify a few young men who may be good candidates for the priesthood and encourage those men to attend one of the events planned by the Priesthood Vocation Awareness Team, Father Van Lieshout said.

“Our job is to run some events — mostly dinners or discussion groups — with men who maybe are not quite ready to talk one on one, but are willing to talk in a group setting,” he said.

Team members also meet individually with young men who have expressed interest in the priesthood and are ready for a one-on-one conversation, Father Van Lieshout said.

The laity also has a role to play in encouraging priestly vocations, Father Van Lieshout noted. The Knights of Columbus has always been very helpful when it comes to promoting vocations, he said, as has the Mothers of Lu, a mothers’ group that meets monthly and prays for the Lord to call forth priestly vocations from their own families.

Catholic families can nurture the seeds of future priestly vocations by giving their children opportunities to interact with priests outside of church, Father Martuscello remarked. He grew up in a family that regularly invited parish priests over for visits, which helped Father Martuscello believe the priesthood could be an option for him, he said.

“It showed me they’re human, they’re just like me. This is definitely something I can do too. They didn’t fall out of the sky. They’re relatable,” he explained.

Lay people can take steps to encourage vocations even if they don’t feel able to join a group or invite priests over for visits, Father Van Lieshout said.

“Make sure in your parishes and in your families that there is some kind of prayer for vocations, that you are asking the Lord to send workers into the harvest,” he said.

Tags: Diocesan Appointments, Holy Orders
Copyright © 2022 Catholic Courier, Inc. All rights reserved. Linking is encouraged, but republishing or redistributing, including by framing or similar means, without the publisher's prior written permission is prohibited.