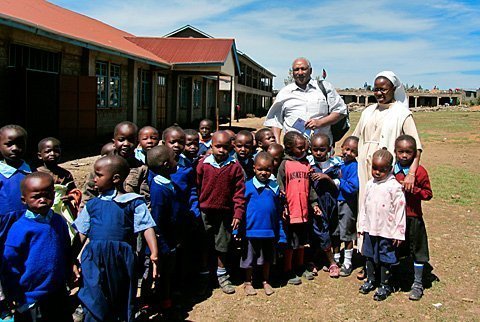 Parishioners at St. Maximilian Kolbe Parish in Ontario, Sodus and Sodus Point broke into hearty applause when they learned in late January that 20 students at the Friends of Fr. Symon Jubilee School for Nomads had recently passed the national examination taken by all eighth-graders in Kenya.

The Kenyan students and their families, already ecstatic about the test results, were spurred to even greater joy when they learned the American Catholics were proud of them, recalled Father Symon Peter Ntaiyia, pastor at St. Maximilian Kolbe and founder of the Kenyan school.

"The kids couldn’t wait to hear this at home. There was all sorts of happiness that people in the church in America would applaud them. That was a lot of encouragement," Father Ntaiyia said.

"My greatest joy and happiness is that all the kids who did this exam made it," he added.

Sixteen of the 20 School for Nomads graduates who took the national exam are members of Kenya’s nomadic Maasai people, who move frequently in search of water and grazing lands for their herds of sheep, goats and cattle. Father Ntaiyia himself grew up in a Maasai tribe and tended his family’s animals until he was 10 years old, so the Maasai people are close to his heart. In 2004 he decided to celebrate the 25th anniversary of his ordination the next year not with a huge party, but by founding a school that would ensure Maasai children had access to a quality education. Such a school would have to be a boarding school since Maasai families’ searches for water and pastureland can take them away from their villages for months at a time, making it impossible for Maasai children to complete a school year at a day school, Father Ntaiyia said.

He used his savings to purchase eight acres of land in Narok, Kenya, and construction began on the school in 2005. Diocesan parishioners who heard about and supported Father Ntaiyia’s project helped him raise enough funds to complete construction, purchase necessary supplies and hire staff. The priest, who has been working in the Diocese of Rochester since 2002 and was incardinated in 2005, served at St. Helen Parish in Gates, Blessed Trinity/St. Patrick parishes in Tioga County, Our Lady of Lourdes Parish in Elmira and St. Agnes Parish in Avon before arriving at St. Maximilian Kolbe.

"So many people have helped. They have all contributed to the joy and the future of so many families," Father Ntaiyia said.

He said he’s not only grateful to all who have supported his school, but also to the Diocese of Rochester and its leaders for welcoming him and allowing him to work here.

"My being here and giving service to the church in America has also given service to the nomadic people of Kenya," he said. "Doing this school in Kenya has also connected me with people (in Kenya) who would have otherwise thought, ‘He moved away from us.’ It shows the people in Kenya that I’m also still with them, and working with them."

Support for the School for Nomads is growing in Kenya, he noted. There were 104 children enrolled in the school during its first year, and this year there are 224 students enrolled, many of them from the Maasai tribe. This means the Maasai people are starting to recognize the value of education, which was not the case a few years ago, Father Ntaiyia said. Life is changing even for Kenya’s nomadic people, who are starting to realize that investing in their children’s educations pays off in many ways. In Kenya, it’s not unusual for an older teen or a young adult with an education and a job to help support his or her parents and siblings, he added.

"A family who has a son who is a teacher or a daughter who is a nurse or working in an office, the kind of economy surrounding their homes is much better. In the past for them to have money to buy clothing or beans, they’d have to sell a goat or a sheep or a cow. If they have a daughter or a son who is working, they don’t have to sell their animal to get their necessities," Father Ntaiyia said.