The following diocesan priests are celebrating their anniversaries of ordination this year. 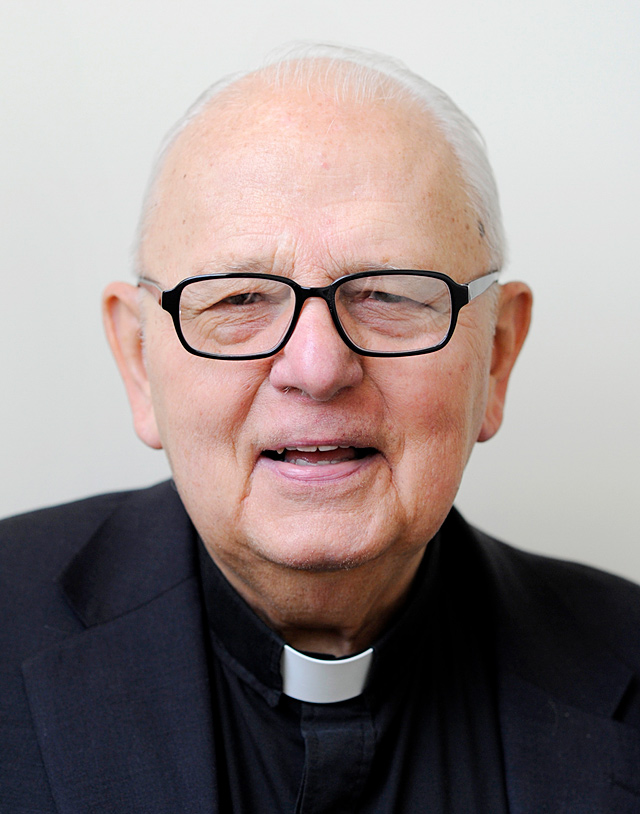 A decade after reaching senior-priest status, Father Robert Bradler continues living by a maxim that he long ago set for himself.

“Stay active as long as you are able,” he stated.

He has assisted in some 68 faith communities over the past 10 years, with his strongest ties being at Rochester’s Immaculate Conception/St. Bridget Parish. What was originally meant to be a two-week hitch has now reached six years and counting — and Father Bradler delights in serving the predominately African-American community.

“Their rich history and traditions, their strong faith and commitment to the church and their warm, friendly personalities have left an indelible mark in my life,” he said.

He then logged two lengthy pastorates in Irondequoit: from 1979-95 at St. James Parish, and 1995-2007 at St. Thomas the Apostle. He remains in Irondequoit to this day, residing in a house on the eastern side of town.

Other long tenures — still ongoing — are 35 years as diocesan director of the Society for the Propagation of the Faith, which supports worldwide mission work; and 48 years as chaplain of the Rochester Fire Department.

Father Bradler will celebrate his 55th anniversary as a priest during the 10 a.m. Mass June 4 at Immaculate Conception/St. Bridget, followed by a social hour. 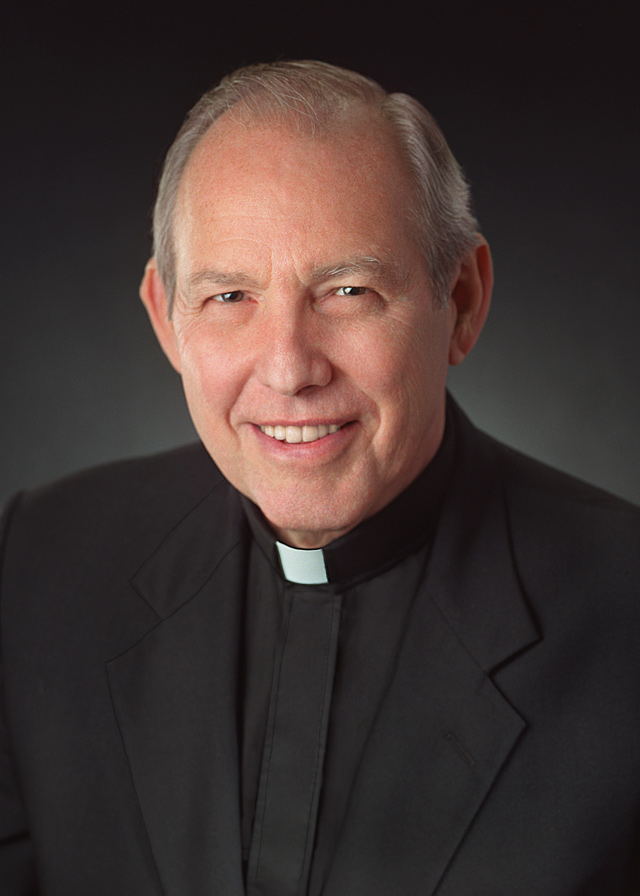 Since becoming bishop emeritus in 2012 after leading the Diocese of Rochester for 33 years, Bishop Matthew H. Clark has remained highly visible in the diocesan community.

“I’ve been doing a fair number of parish retreats since I retired,” Bishop Clark reported. “I just finished two in Lent and I did a couple last fall, all of which I’ve enjoyed very much.”

In addition, he noted, “I give occasional talks to parish groups, catechists, parish pastoral councils, things of that nature. I’ve done some for parish staff, several of those, and I help out (celebrating Mass) at parishes, quite a variety of parishes, on an as-needed basis or occasionally when they invite me to come.”

Bishop Clark is a native of Waterford, near Albany. He attended Catholic Central High School in Troy, Holy Cross College in Worcester, Mass., Mater Christi Seminary in Albany and St. Bernard’s Seminary in Rochester. He finished his studies at the Pontifical North American College and Gregorian University in Rome, Italy, earning licentiates in sacred theology and canon law. He was ordained a priest Dec. 19, 1962, at the Church of Christ the King, Rome.

As Father Matthew Clark, he taught at Vincentian Institute in Albany, served at Our Lady of Mercy Parish in Albany (1963-64), studied at Gregorian University (1964-66), was vice chancellor of the Diocese of Albany (1966-67) and was assistant pastor at St. Ambrose Parish in Latham (1967-72). He then served as assistant spiritual director (1972-74) and spiritual director for seminarians (1974-79) at North American College in Rome.

Pope John Paul II appointed him eighth Bishop of Rochester on April 23, 1979. Bishop Clark was installed on June 26 of that year in a stirring celebration before several thousand people at the Rochester Community War Memorial. In that same building 14 years later Bishop Clark led the closing of another event — the diocesan synod, which he has called one of the highlights of his time as bishop.

He submitted his resignation upon reaching his 75th birthday July 15, 2012, as required by church law, and began retirement in September of that year. Bishop Clark, who lives at Our Lady Queen of Peace Church in Brighton, said he plans to celebrate his 55th anniversary of priestly ordination with close friends. 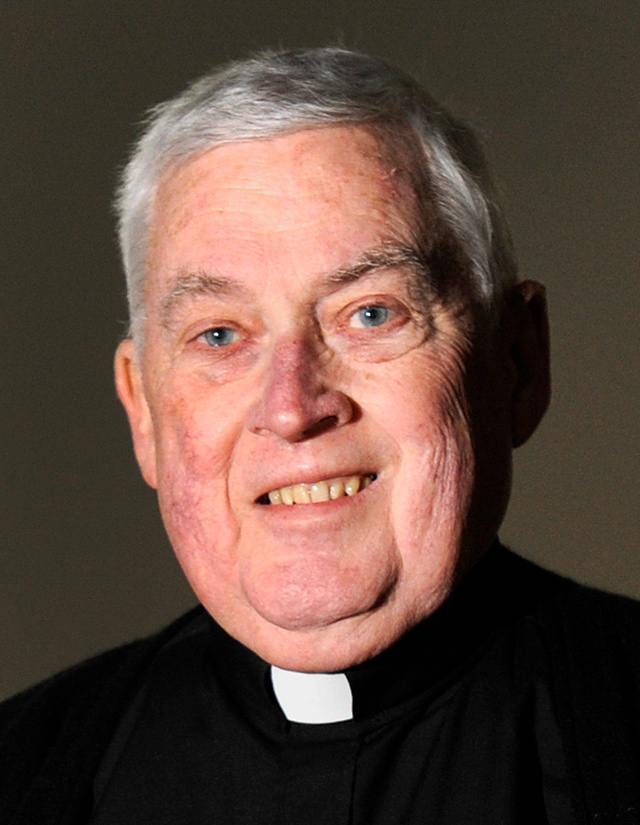 Father Michael F. Conboy is another 55th-year priest who believes in keeping busy. He resides in Skaneateles and does a regular weekend turn at St. Patrick Church in Aurora; he also assists at Ss. Mary and Martha Parish in Auburn and Sacred Heart, Auburn/St. Ann, Owasco.

“I sort of got a cue from my former housemate, (Father) Frank Davis in Corning. He said to me one day, ‘Now that I’m retired, I do not want to spend my time in a rocking chair.’ I’ve thought about that many times,” Father Conboy said.

Father Conboy served as secretary to Bishop Joseph L. Hogan from 1969-78. During that time he also served as pro-synodal judge in the diocesan Tribunal and diocesan consultor.

He also served as diocesan director of priest personnel (2000-10) and rector of the Becket Hall program for priesthood discernment (2005-10). Shortly after reaching senior-priest status in 2010, he was temporary parochial administrator of Auburn’s Holy Family Parish.

Father Conboy will celebrate his jubilee with a Mass in the near future; details hadn’t been finalized at press time. 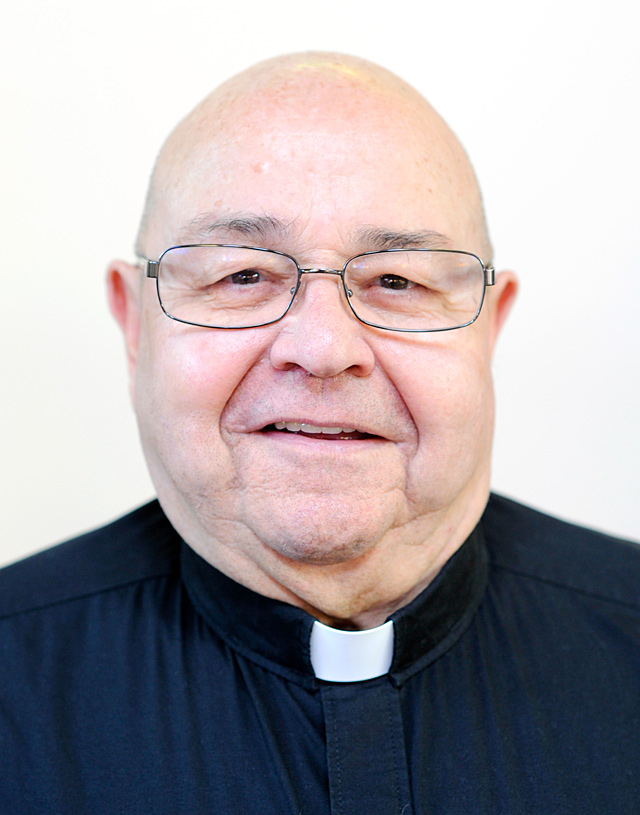 Father Eugene Weis has worn several hats in his life, and in the 55th year of priesthood he’s emerged with a new distinction to add: that of book author.

Portrait of a Happy Priest, which he released earlier this year, highlights Father Weis’ vocation as well as his many interests and activities — most notably firefighting and playing softball.

“I want to promote the fact that priests are happy and can do a lot of different things,” Father Weis explained. (To order a copy of the book, contact Father Weis at 585-641-8268.)

Upon reaching senior-priest status in 2004, he resided and assisted at St. Timothy Parish at The Villages, a retirement community in central Florida. In 2012 he moved to his current residence at the Sisters of St. Joseph Motherhouse in Pittsford.

For many years Father Weis was involved with Worldwide Marriage Encounter and Cursillo. He answered 1,000 calls as a volunteer firefighter and played softball until he was 60.

Father Weis plans to note his 55th anniversary in June, in conjunction with other jubilee celebrations for residents of the motherhouse. 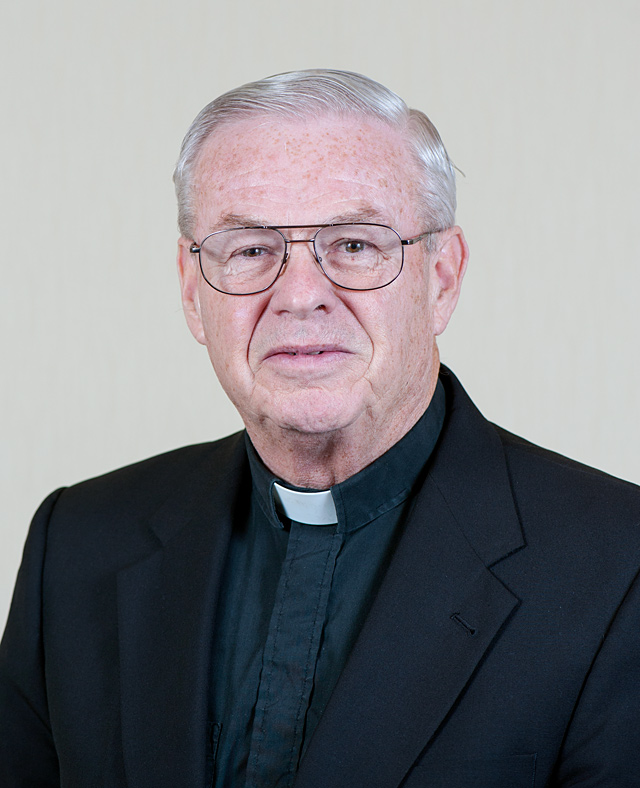 Whereas a half-century of priestly service is a notable individual feat, Father Lewis Brown prefers to view his milestone as something to be shared among loved ones.

“Those who are married for 50 years gather family and friends and celebrate life, and it’s the same in the church,” Father Brown said. “It’s a celebration of church.”

In 1985 Father Brown began a 22-year commitment as a United States Navy chaplain, ministering in many places around the globe before retiring from active duty in 2007.

Since returning to the Rochester Diocese and settling in the Corning/Painted Post area, Father Brown has been a fixture at All Saints Parish, where he was parochial vicar and has continued to assist since reaching senior-priest status in 2012. He helps out each Sunday at the Bath VA Medical Center as well, and also has upped his community involvement in such organizations as Catholic Charities and Big Brothers/Big Sisters. 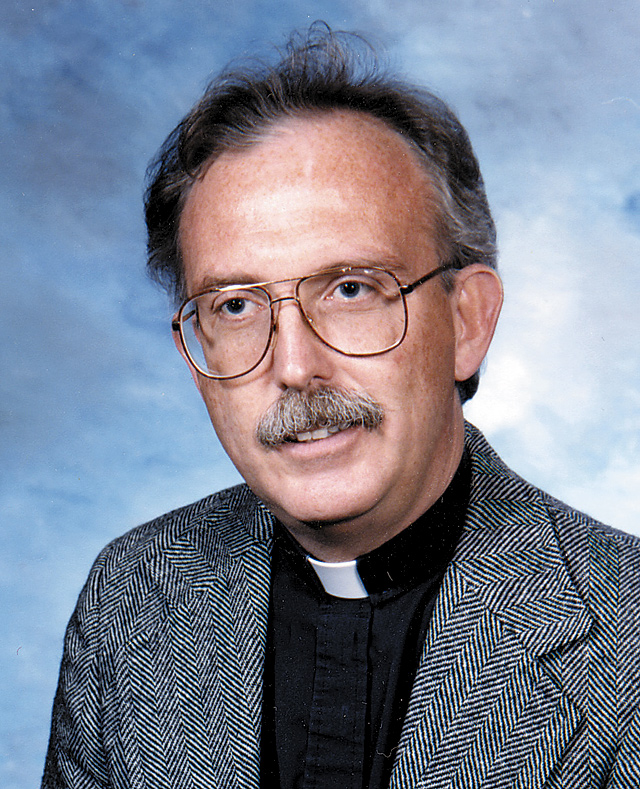 Father Terence Fleming continues to be active near his home in Clearwater, Fla., assisting at St. Matthew Parish in Largo and the Our Lady of Divine Providence retreat center in Clearwater.

“I do counseling on the side, either at St. Matthew’s or at my home,” he added.

Father Fleming is a native of Sacred Heart Cathedral Parish. He attended Aquinas Institute, then St. Andrew’s and St. Bernard’s seminaries; he also earned a doctorate in counseling from Colgate Rochester Divinity School.

From 1985-88 Father Fleming served as chaplain of Rochester’s Genesee Hospital, and from 1988-92 was pastor of Greece’s St. Charles Borromeo Parish. He also was a therapist for Catholic Family Center from 1984-89.

From 1992-2006 he was director of pastoral care in the BayCare Health System in Florida. From 2006-11, he was vice president of mission for Roper St. Francis Healthcare in Charleston, S.C, retiring from that position in 2011. He reached senior-priest status in 2012 as a Rochester diocesan priest.

He will take part in a 50th-anniversary celebration at St. Matthew on June 3 and also plans to be in Rochester May 18 for the annual Jubilarian Mass.

“There been many, many joyful moments and many difficult times,” Father Fleming said of his half-century as a priest. “But at the same time, I’ve never wanted to be anything else.” 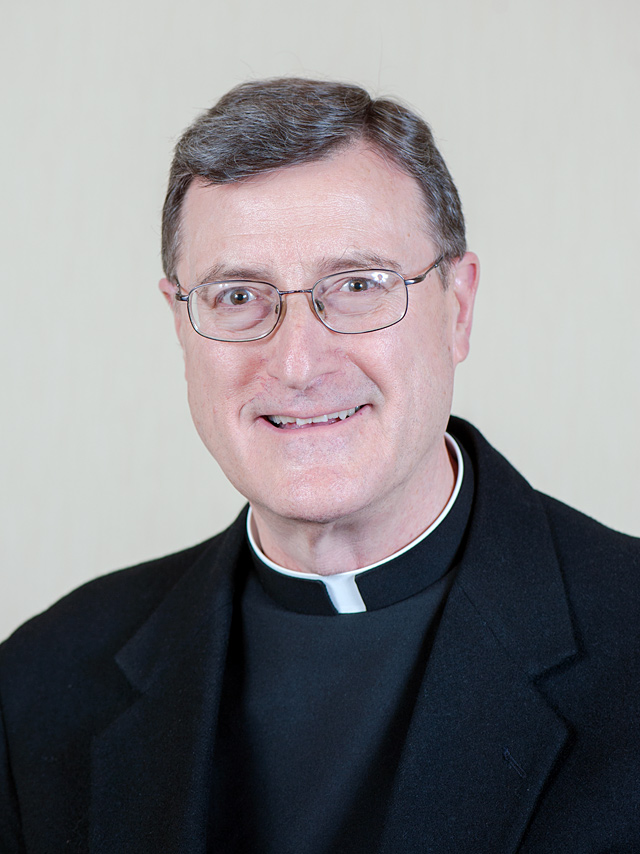 Father Frank Lioi, who turned 75 this past Dec. 14, continues thriving in his pastorates at St. Mary Parish and Ss. Mary and Martha Parish, both in Auburn.

“Things are going well,” he said. “I have good health and am still interested in what I’m doing.”

He spent eight years at the American College of the Immaculate Conception in Louvain, Belgium, serving as assistant to the rector for planning and development (1981-84) and vice rector and director of development (1984-89).

His first pastorate was from 1989-2002 at Rochester’s St. Anne Parish. In 2002 he became pastor at St. Anthony, Groton, and Holy Cross, Dryden. Two years later he arrived as pastor at St. Mary in Auburn, and since 2014 has been pastor at Ss. Mary and Martha as well.

Father Lioi will observe his 50th anniversary Sunday, June 11, with solemn vespers at 3 p.m. at Auburn’s St. Mary Church. Bishop Salvatore R. Matano will be in attendance as well. An informal reception will follow at 4:30 p.m. at the Hilton Garden Inn.

Father Lioi said he plans to remain a pastor at least through 2018, saying he’s involved in several projects.

“I think, for me, there’s always something more to do,” he said.