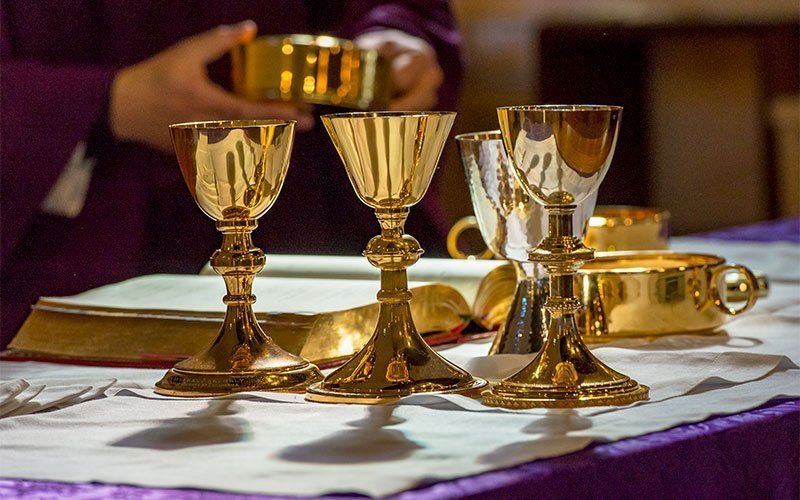 Ministries of Rochester Diocese’s priests can take many forms

After returning to Rochester he studied at St. Bernard’s Seminary and was ordained by Bishop James E. Kearney on June 5, 1954, at Sacred Heart Cathedral.

He served as assistant pastor at St. Andrew, Rochester (1954-58), and Holy Trinity, Webster (1958-62), before becoming chaplain at Bishop Kearney High School (1962-65). He was assistant pastor (1965-74), copastor (1974-78) and pastor (1978-81) of Our Lady of Mercy in Greece. He then served as administrator at St. Cecilia in Elmira for several months before taking a sabbatical in Rome to study changes in the church after Vatican II. When he returned in 1982 he helped found St. Elizabeth Ann Seton in Hamlin, which he said was one of his favorite experiences.

“Seeing it prosper today is exciting,” he said.

In 1990, he took another sabbatical, this time to Africa to study enculturation and liberation theology. After retiring from the pastorate at St. Elizabeth Ann Seton in 1998, he lived and ministered at Our Lady of Lourdes (1998-2001) and St. Thomas More (2001-09) in Brighton. Since 2009 he has lived and ministered at St. Joseph, Penfield.

Father Francis J. Erb has spent most of his priesthood ministering in the Southern Tier, but grew up in Rochester, where he belonged to St. Ambrose Parish and attended Aquinas Institute and St. Andrew’s and St. Bernard’s seminaries. He was ordained June 5, 1954, by Bishop James E. Kearney at Sacred Heart Cathedral.

After reaching senior-priest status in 1993, Father Erb spent 15 years traveling the diocese and filling in for priests who were ill, on vacation or on sabbatical. In recent years, he assisted at Ss. Isidore and Maria Torribia Parish in Addison, Bradford and Campbell.

“I am very grateful to almighty God for all of the places he’s sent me,” Father Erb said. “I had many wonderful experiences and am very grateful for all the people I met and how good they were to me.”

Father Robert G. Kreckel began his ministry by serving migrant farmworkers while he was pastor of St. Mary of the Lake in Ontario.

He said the work was a continuation of his connection to other cultures, which began at Rochester’s Immaculate Conception Parish, where he served the African-American community from 1960-73.

“Every culture has its values and its history,” said Father Kreckel, who will turn 91 on May 11. “For me, working with different cultures is an eye-opening experience.”

Reaching senior-priest status 15 years ago has not slowed his pace. He continues to assist with Masses and confessions at St. Joseph, Penfield, and presides at Masses at the Mercy Center in Brighton.

Father Kreckel also celebrates Mass each month for the migrant community at Our Lady of Guadalupe Mission at St. Gregory Church in Marion. In addition, he teaches English as a second language classes at St. Joseph Parish, where he currently resides.

Although Father William M. Barrett reached senior-priest status in 2002, he has had no problem keeping busy. Currently a resident of Mayville in the Diocese of Buffalo, he assists at St. Mary of Lourdes, which comprises St. Mary in Mayville and Our Lady of Lourdes in Bemis Point, and has served as interim pastor since 2009.

He grew up in Rochester’s Blessed Sacrament Parish and attended public schools, as well as St. John the Evangelist School on Humboldt Street and St. Andrew’s and St. Bernard’s seminaries, all in Rochester. He said his parents encouraged him to go to a Catholic high school, and he chose to attend St. Andrew’s, then the diocesan minor seminary.

“I liked it each year better than the year before,” he said. “I sort of grew into it. It was a very subtle thing.”

Father P. Paul Brennan grew up in Auburn’s Holy Family Parish and attended its school. He studied at St. Andrew’s and St. Bernard’s seminaries in Rochester and was ordained at his home parish June 6, 1959, by Bishop James E. Kearney. He was assistant pastor at St. Michael in Penn Yan and St. Andrew in Dundee (1959-65), St. John the Evangelist in Spencerport (1965-67) and Immaculate Conception in Rochester (1967-73), where he also was pastor (1973-87). In 1987, he became pastor at Sacred Heart in Auburn and St. Ann in Owasco and retired in 2000. He currently resides in Auburn.

Since attaining senior-priest status in 2005, Father James Burke spends the winter months in Cape Coral, Fla., where his help is greatly welcomed at St. Andrew Parish. In the summer, he provides assistance at Auburn’s Ss. Mary and Martha Parish (St. Francis of Assisi and St. Hyacinth churches).

“It’s a great privilege you have, serving the people,” he said at on the occasion of his 50th jubilee in 2014.

From Rochester to the Finger Lakes to South America, Father Peter Deckman has spent most of his priesthood serving the poor.

He grew up at Rochester’s Our Lady of Good Counsel Parish and attended that city’s Aquinas Institute as well as St. Andrew’s and St. Bernard’s seminaries. He was ordained June 6, 1964, by Bishop Lawrence B. Casey at Sacred Heart Cathedral.

He was an assistant pastor at St. Thomas More, Brighton (1964-66), before spending eight years in Bolivia. Beginning in 1974, he ministered to Hispanic Catholics in Geneva and then became copastor of St. Michael, Newark. In 1979, he returned to Bolivia, staying until the mid-1980s.

Father Deckman obtained senior-priest status in 2008 and continued to assist at Rochester’s Holy Apostles Parish until being slowed by Parkinson’s disease. He currently resides at the Sisters of St. Joseph Motherhouse in Pittsford.

When reflecting on his many years in ministry, Father Deckman describes it as a “tremendous richness.”

“I have seen God through the faces of people,” he added.

Since 2014, Father Albert Delmonte has been a part of the pastoral team at St. Ann’s Community as a resident retired priest chaplain.

“(To serve the people of St. Ann’s) has been very inspiring and a great joy,” he said of his current ministry. “I’m very happy to be here.”

Looking back on his 55 years in the priesthood, he said “the profound faith of the people I have served has been inspiring and motivating.”

“It’s a wonderful ministry in terms of that particular population, and I like very much the involvement,” he said at the time of his 50th anniversary to the priesthood in 2014.

Father Donnelly grew up in Holy Family Parish in Auburn, and attended St. Andrew’s and St. Bernard’s seminaries in Rochester. He was ordained by Bishop Lawrence B. Casey at Sacred Heart Cathedral on June 6, 1964.

He served as assisting priest at St. John the Evangelist, Rochester (1964-69), and chaplain at Monroe Community College (1969-76) before taking a 10-year leave of absence doing social-service work. Returning to priestly duty in 1986, Father Donnelly ministered in two Long Island parishes.

Father Roy Kiggins said he’s experienced the good, the bad and the ugly times as a priest over the past 55 years — but stressed that they have been mostly good.

“I have enjoyed being with the people in their good times and helping them through the bad times,” he remarked.

A native of Rochester, Father Kiggins graduated from St. James School in Irondequoit and attended Rochester’s St. Andrew’s and St. Bernard’s seminaries. He was ordained June 6, 1964, by Bishop Lawrence B. Casey at Sacred Heart Cathedral.

He then became pastor of Nativity of the Blessed Virgin Mary, Brockport, where he continued until 1999. Following a sabbatical in El Salvador, he became pastor of Geneva’s St. Stephen and St. Francis de Sales churches — now known as Our Lady of Peace Parish — where he served from 1999 until he attained senior-priest status in 2008.

Father John Mulligan thanks God for blessing him with 55 years of service as a priest.

“It overwhelms me a bit,” he said, reflecting on this milestone.

He served as first-ever moderator of the diocesan Pastoral Center from 1988-98. In 1988, he also was named one of two diocesan vicars general, continuing in role position until Bishop Emeritus Matthew H. Clark’s 2012 retirement. In addition, he was pastor of Most Precious Blood, Rochester (1998-2000); Sacred Heart Cathedral (2000-05); and the Cathedral Community (2005-08).

He attained senior-priest status in 2008 and assists at Holy Trinity, Webster, where he has resided since 2013.

“I have always enjoyed journeying along with God’s people, and serving God’s people has been a great source of nourishment,” he commented.

In 1957, he enrolled at St. Andrew’s Seminary in Rochester at the age of 14. After completing his studies at St. Andrew’s as well as St. Bernard’s seminaries, he was ordained June 7, 1969, by Bishop Fulton J. Sheen at Sacred Heart Cathedral.

Father Endres was chaplain at Rochester General Hospital from 1994-2001 while also serving at St. Andrew and St. Philip Neri parishes in Rochester.

From 2002 until reaching senior-priest status in 2013, he was chaplain at Rochester’s Strong Memorial and Highland hospitals as well as assisting priest at St. Mary of the Assumption Parish in Scottsville. In 2011, he took on an assisting role at St. Columba/St. Patrick Parish in Caledonia and St. Vincent DePaul Parish in Churchville, which have merged with St. Mary to form St. Martin de Porres Parish.

Father Endres said he’s enjoyed the combination of hospital and parish work, which afforded him the opportunity to support people in their times of deepest need and be with them in their sorrows and their joys.

He was ordained in 1969 at Sacred Heart Church in Yonkers by Bishop Joseph Paronicon, then an auxiliary bishop of New York. Following ordination, Father Maloney taught at Sacred Heart School in Yonkers until 1972. During this time, he earned a master of science in divinity (1966-68) from¬≠¬≠¬≠¬≠ Mary Immaculate College, as well as a master of arts in divinity from Maryknoll Seminary (1969-70).

He then was named postulant director at the Capuchin Franciscan Province of St. Mary (1972-76). Later that year, he was named parochial vicar for St. Joseph’s Church in New Paltz (1976-81). He then became pastor of St. Joseph the Worker Church in East Patchogue, Long Island (1981-87).

In 1987, he was named provincial vicar for the Province of St. Mary. While serving in that role, he also was personnel director and postulant director (1987-93) for the order. Following this assignment, he was served as pastor for five years at Sacred Heart Church in Yonkers.

“Looking back on my ministry, meeting and serving thousands of people, I have enjoyed their support and appreciation,” Father Maloney said.

Father Paul Gitau was ordained a priest for the Archdiocese of Nairobi, Kenya, on June 18, 1994, by Cardinal Maurice Otunga at Nairobi Holy Family Basilica.

After ordination, he was appointed assisting priest at St. Patrick’s Parish, Thika (1994-95); pastor of Archangel Gabriel Mutomo Parish (1996-98); pastor of Our Lady of Mt. Carmel, Ngarariga Parish (1998-2000); and pastor of St. Patrick’s Parish, Thika (2000-2003). During this time, he was elected dean of the Thika Deanery and served as a member of the Archdiocesan Senate, collaborating with fellow deans and the archbishop in matters of church policy and procedures (2001-03).

During his time at Fisher, he was assisting priest at St. Jerome, East Rochester, and St. Monica, Rochester, and was appointed parochial administrator of Immaculate Conception/St. Bridget, Rochester. He also served as pastor of Immaculate Conception; sacramental minister at St. Agnes Parish in Avon; and coadministrator of St. Frances Xavier Cabrini Parish (2010-11). In 2011, he was appointed pastor of St. Paul Church in Webster, where he currently serves. In 2012, he became an American citizen and also was incardinated as a priest of the Diocese of Rochester.

Father Gitau said he is elated to be celebrating the his 25th jubilee.

“I thank God that I joined the mission despite challenges that arise or whenever there seems to be crisis involving the church,” he said. “I remain faithful and not ashamed to be a part of the ministry.”

Other priests celebrating ordination jubilees in 2019 are the following: