Prince of Persia: The Sands of Time - Catholic Courier 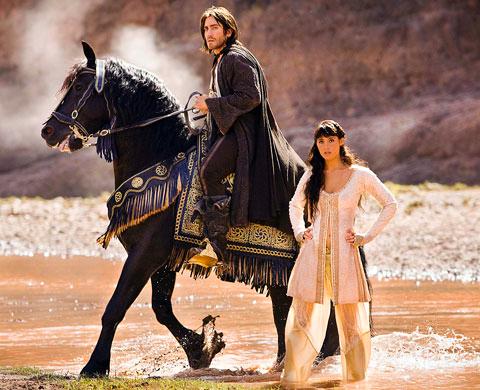 NEW YORK (CNS) — "Prince of Inertia" might be a more fitting moniker for "Prince of Persia: The Sands of Time" (Disney), the big-screen adaptation of a popular video game series. Although there’s ample movement, thanks to hyperactive camerawork and frenetic special effects, those titular grains do not pass quickly enough through the hourglass.

Ossified dialogue and wooden acting contribute to the film’s plodding quality. Mostly, however, the pleasures of a rousing sword-and-sandal epic are squashed in the hands of action producer Jerry Bruckheimer, whose computer-generated excesses tend to deflect viewers rather than draw them in.

Director Mike Newell — responsible for "Harry Potter and the Goblet of Fire" along with notable smaller-scale fare — fails to bring a distinctly human touch to the loud, flashy proceedings.

A number of sequences are too intense for children and the level of violence increases as the story progresses, but there’s nothing offensive about the movie’s content.

Like many plots involving a fractured space-time continuum, the story — set in the sixth century — is a tad disorienting. Jake Gyllenhaal, using a British accent, plays acrobatic hero Dastan, an orphan plucked from the streets by King Sharaman (Richard Coyle) and raised as his son.

Years later, Dastan and the monarch’s two sons by birth lead an attack on a holy city presided over by Princess Tamina (Gemma Arterton), during which Dastan comes into possession of a magical dagger that gives whoever wields it the ability to change the past.

After King Sharaman is murdered, Dastan is pitted against his adopted brothers and uncle Nizam (Ben Kingsley). A fugitive, he joins forces with Tamina to safeguard that nifty knife of his since, as we learn, it also has the fearful potential to destroy humankind.

The interplay between Dastan and Tamina is meant to be romantically charged yet is undone by stilted writing and performances, and by the artificial nature of the movie overall. The script’s stabs at humor likewise miss the mark. Only the anti-government chatter of a mercenary sheik named Amar (Alfred Molina) elicits a few chuckles, since it echoes the contemporary Tea Party movement.

"Prince of Persia" is all over the place regarding religion, as the pagan mythology surrounding the dagger mixes uneasily with a few lines upholding monotheism and some vague references to spiritual awakenings. Other thematic strands concerning heroism and the need for leaders to follow their hearts feel strictly pro forma.

Morocco provided the scenic backdrop, but visually everything is dominated by the virtual, videogame aesthetic — so much so that it’s hard to worry much about the hero’s fate. According to the time-bending thesis of the narrative, nothing that transpires has to happen, so perhaps it’s no accident that "Prince of Persia" itself feels wholly unnecessary.

The film contains frequent, moderately intense violence, a number of frightening images and some sexual innuendo. The Catholic News Service classification is A-II — adults and adolescents. The Motion Picture Association of America rating is PG-13 – parents strongly cautioned. Some material may be inappropriate for children under 13.