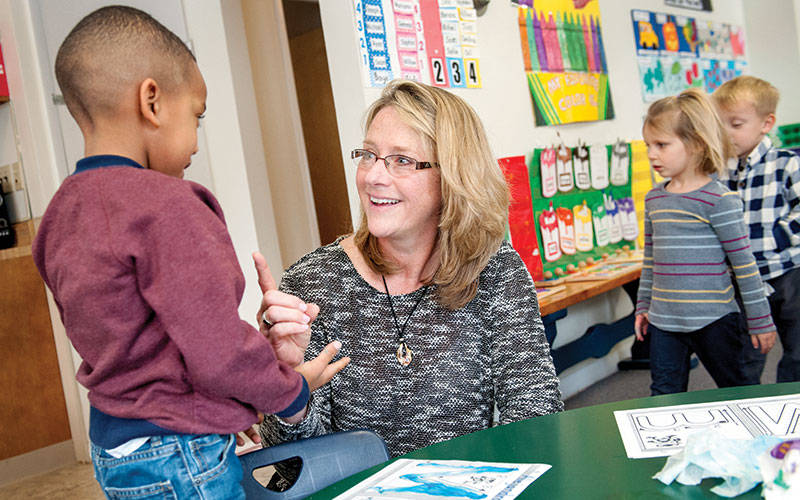 Jean Yorio visits with prekindergartners in her first year as principal of St. Mary Our Mother School in Horseheads Jan. 14, 2016. (Courier file photo)

Up until 2015, Jean Yorio’s entire career in education — dating back to the mid-1980s — had been spent in public schools.

But after receiving a phone call from Father Christopher Linsler, pastor of St. Mary Our Mother Parish in Horseheads, her professional life took an unexpected turn.

As Yorio recalls, Father Linsler said he’d heard that she was certified in educational administration and wanted to verify that information. It didn’t take her long to sense where their conversation was headed.

Sure enough, the pastor was gauging her interest in the principal’s position at St. Mary Our Mother School that had opened up when Marilyn Zinn announced her retirement after 14 years in that role. Yorio was eventually offered the job beginning in the 2015-16 school year, and she accepted.

“I’ve never been able to say no to Father Chris yet,” remarked Yorio, a St. Mary Our Mother parishioner for nearly three decades.

Now it’s Yorio who has opted to retire from the parish school; her retirement became effective July 31. She called the decision to step down “heart-wrenching” due to the fondness she has for the school’s students, families and staff, but explained that she wants to spend more time with her family. She and her husband of nearly 30 years, John, have three children ages 18 through 28.

Yorio was born in Hartford, Conn. As a child, she moved to Alfred, N.Y., and eventually graduated from Pittsford Mendon High School in suburban Rochester. She earned her bachelor’s degree in elementary education from Alfred University, master’s in early childhood education from SUNY Geneseo and certification in educational administration from SUNY Brockport.

She taught in the Dundee Central School system in the late 1980s and early 1990s. Then, over a period of nearly two decades, she served as a teacher and administrator in the Horseheads Central School District. Her principal’s position at St. Mary Our Mother included dual responsibilities in that role for the 2018-19 school year at Chemung County’s other Catholic school, Holy Family in Elmira.

“During her time as principal, Mrs. Yorio has always been the consummate professional, whose door has been open to anyone who needed her time,” Father Linsler wrote in St. Mary Our Mother’s July 11 bulletin, adding that the school and parish will miss Yorio’s enthusiasm, professionalism and friendship.

Yorio said she’s had a fulfilling six years meshing her professional world with her faith life; she’s a convert to Catholicism.

“Private schools — and, more importantly, Catholic schools — should have a part in every community,” said Yorio, asserting that parents need options for pursuing what they feel is best for their children’s education.

According to Yorio, enrollment at the prekindergarten through grade 6 school went up from 115 to 130 in 2020-21 and will begin 2021-22 with at least 140. So, the future looks good for the school after more than a year of enduring massive adjustments related to the coronavirus pandemic. Yorio said that all involved at St. Mary Our Mother did a remarkable job of adapting, and that academically, students achieved a “higher level of success than even during a normal year” and developed strong character traits along the way.

“She’s going to be wonderful,” Yorio said, remarking that Bill’s strong organizational skills will be beneficial in her new position.

Yorio noted that she won’t entirely disappear from the St. Mary Our Mother School scene. By volunteering and substitute teaching as time allows, she plans to stay connected to the school she’s grown to love since taking Father Linsler up on his offer a few years back.

“This is a family of families. Everyone is there for each other; no one is there for themselves,” Yorio said. “It’s just the most caring and loving environment, and it gives you so much reward.”

Tags: Catholic Schools, Chemung County News
Copyright © 2022 Catholic Courier, Inc. All rights reserved. Linking is encouraged, but republishing or redistributing, including by framing or similar means, without the publisher's prior written permission is prohibited.