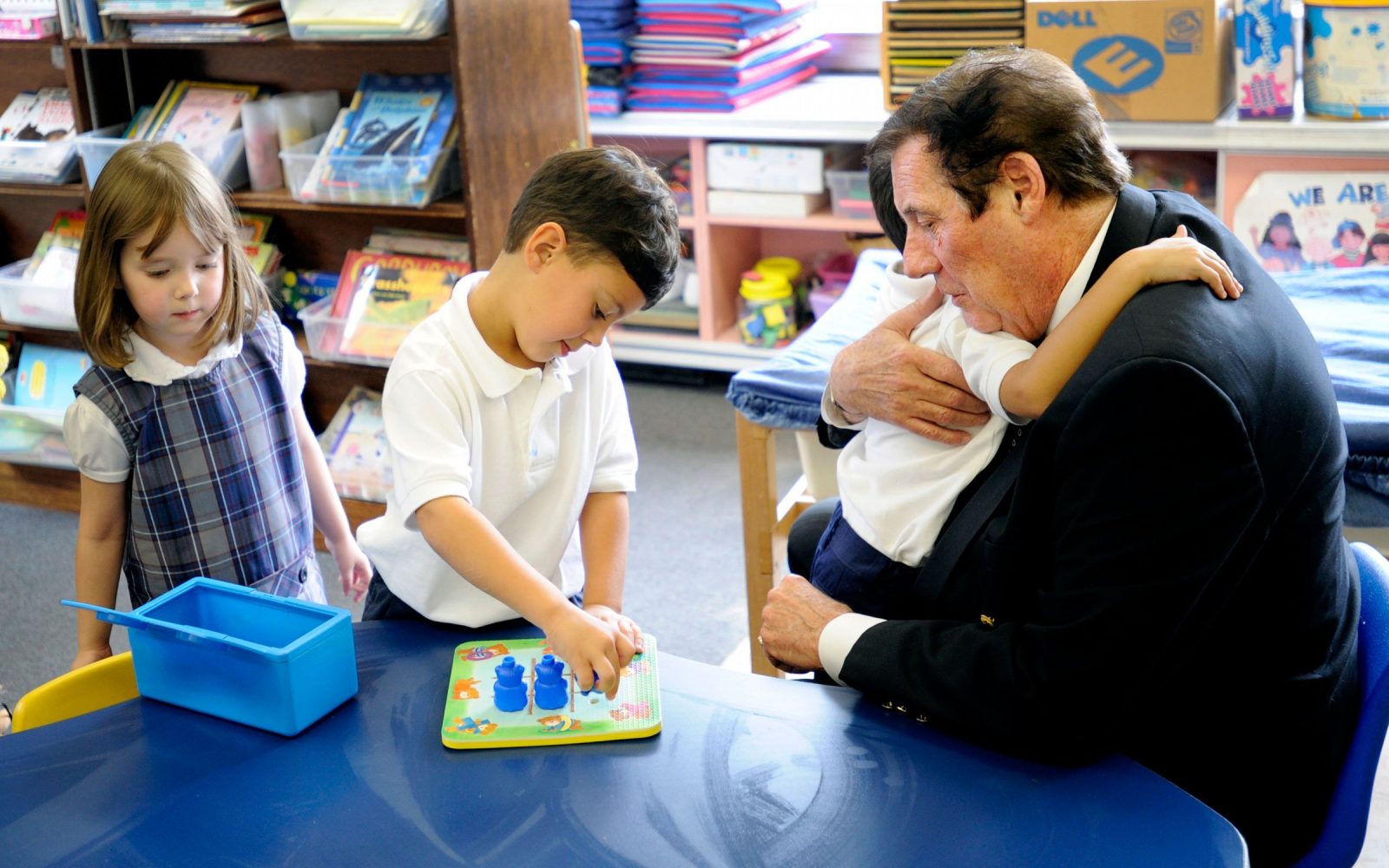 It took one conversation with the principal of St. Agnes School in Avon for Kristen Stevens to decide to enroll her son in the prekindergarten program there. Stevens said that talking to “Dr. Ben” — as Principal Gerald E. Benjamin is known to parents — helped convince her that St. Agnes was the right place for her child.

“(Benjamin is) kind, sweet and he loves the kids,” Stevens said. “He’d do anything for the school.”

Known for personally greeting students each day, Benjamin said he makes it a point to be on a first-name basis with every student. He has had to learn a lot of names in his 50 years as an educator.

“It just doesn’t seem like it has been 50 years,” remarked Benjamin, 72, who has a doctorate in special education and curriculum development/administration from Syracuse University. “I’ve been blessed through all my professional assignments.”

His career started in 1959 in the fledgling field of special education as a teacher at the Massachusetts Hospital School for physically disabled children in Canton, Mass. After a year there, he moved to a public school in New Hampshire, where he taught a class of children who were physically disabled, mentally delayed or emotionally disturbed.

He said he immediately noticed that the treatment of the New Hampshire students reflected society’s attitudes about the disabled. For example, the students were assigned to a dilapidated building that had been condemned. Also, the special-education students had to eat separately, ride separate buses and use different playground equipment than their peers who did not have disabilities.

“My greatest accomplishments were working with the administration in tearing down some of the barriers,” said Benjamin, who noted that he learned how to play bridge so that he could talk one-on-one with the district superintendent and principal about the equity of the special-education program.

His other accomplishments included helping downtrodden students come into their own. Some had suffered horrific abuse. For instance, one student, Robert, had been discovered manacled in an attic just prior to being placed in “Mr. B’s” class.

During the year, Benjamin helped Robert grow from being a nonverbal child who cringed whenever his teacher raised a hand, into a student who learned how to swim and who said his first word: “Bran” for Brandon, Benjamin’s dog.

At the end of the year, Benjamin’s class put on a play, “Whistle While You Work,” which their teacher said aimed to show the students the value of hard work. It also taught their parents lessons about ability.

“People were crying in the audience,” Benjamin recalled. “They couldn’t believe my quote-unquote ‘stupid kids’ could do such things. They just hadn’t been believed in before.”

Though he was only at the school for a year, Benjamin said those students left a lifelong impression on him.

“I have just tried to be a definition of compassion,” he said.

After that year, Benjamin received a scholarship to do his doctoral work at Syracuse University. He went on to teach teacher preparation at Syracuse, the University of Virginia and Boston University. Then a friend, newly appointed superintendent of schools in Geneseo, asked if Benjamin would be interested in becoming a principal at a brand-new school in Geneseo.

“He said, ‘Why don’t you get out from behind the podium and put into practice everything you are teaching?'” Benjamin said.

So Benjamin did, becoming a principal at Geneseo Elementary School from 1972-87. He also was elementary-school principal in Cambridge, N.Y., from 1987-90 and in the Caledonia-Mumford school district from 1990-97.

Though he retired in 1997, Benjamin said he wasn’t ready to slow down. That’s when he said he felt called to be in a Catholic school.

“It is just wonderful being in a faith-filled community reflecting love and offering the comfort of friendship,” Benjamin said. “There have been so many messengers of God working with me.”

He named several Sisters of St. Joseph, the faculty and staff of the school, fellow Catholic-school administrators, and parent and community volunteers who have worked hard with him.

Partnerships with parents and community-member donors have helped him start up a fine-arts program that brings several guest artists to the school each year. Benjamin paid for the program out of his pocket for the first year, and donations have financed it in subsequent years. Benjamin noted that he has been passionate about the arts ever since his childhood, when his family heard the Boston Pops on a monthly basis.

“I wanted the children to have the same experiences I had,” he said.

He also is proud that St. Agnes students’ academic achievements and their experiences have expanded their horizons far past the Village of Avon and have included such things as one-on-one chats with astronaut John Glenn. Several teams of students have qualified for this honor over the years by being top finishers at a NASA-run Space Day competition.

“He listens to everybody like you are the only person in the room,” said prekindergarten volunteer Jan Irwin of Avon. “He’s such a family-oriented person.”

When asked about Irwin’s comment, Benjamin opened his arms to gesture to the walls of the school that surrounded him.