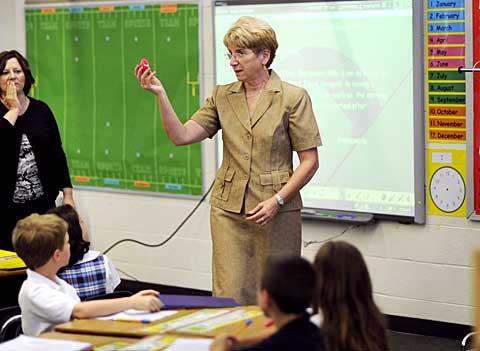 Kathleen Carroll retired as principal of St. Louis School in Pittsford. Above, she talks to students on the first day of the 2009-10 school year.

When Kathleen Carroll, principal of St. Louis School in Pittsford, was touring the Kenyan school funded by her students, she learned a saying from the locals: "God is good, all the time. All the time, God is good."

It’s a phrase she brought back from Kenya and repeated often to St. Louis students. On the last day of school this year, students wore T-shirts featuring the saying as a way to say goodbye to her. Carroll, 64, retired after 13 years as St. Louis’ principal and 43 years as a Catholic educator.

Carroll said she is looking forward to what good things God has in store for her.

Carroll said she had a difficult time deciding to retire, but she said she was motivated by a diocesan proposal to shift administration of St. Louis School from the diocese to the parish by July 2011. St. Louis Parish has said it will study the proposal and is waiting to see results of similar transitions happening this fall at St. Lawrence School in Greece and St. Joseph School in Penfield.

"Someone should be sitting in this seat who is part of that planning," Carroll said of her principal position.

The diocese has appointed John Bellini, who has been a Churchville-Chili Middle School principal since 1998, to be that person.

"We really felt that he had a sense of faculty development that would be helpful for us as we look to parish reversion," said Father Kevin Murphy, pastor of St. Louis Parish, who helped with the search for Carroll’s replacement.

In noting that Carroll leaves big shoes to fill, Father Murphy said she has been very successful at creating a community atmosphere at St. Louis and communicating well with parents.

"She runs a great school, and has lots of faculty support, and a lot of care for the parents, and she loves the children, and she knows them all," Father Murphy said.

He said helping to establish the school in Matuma, Kenya, has been one of several accomplishments of Carroll’s time at St. Louis. The Kenyan school also is called St. Louis and serves about 500 students. In addition to raising funds to build classrooms, Pittsford students have purchased school library books and funded bathrooms for their Kenyan counterparts.

"It’s really neat to see kids so enthusiastic and with a real sense that they are helping other people," Father Murphy said.

Carroll said she plans to continue being involved in the Matuma school in her retirement.

"It’s the only school in Kenya that has been started by children," Carroll said. "Isn’t that awesome?"

Building the Kenyan school also has taught St. Louis, Pittsford, students how to live out their Catholic faith, she said.

"Very often, when I talk to new families, I tell them they are giving a gift to their child because they are helping them to have a foundation of faith that will stay with them," said Carroll, who noted that parents learn about the Catholic faith alongside their children.

Carroll said although she really enjoyed teaching, she followed the advice of others to pursue administration because she wanted to try a new challenge. In 1986, she went to Irondequoit’s St. Margaret Mary School as principal.

"Instead of one classroom, I had a whole school of classrooms," Carroll said. "I have been very grateful that I remember what it’s like in the classroom."

During that time, St. Margaret Mary went from being a parish school to being part of the diocesan-administered quadrant system, doubling its population and becoming multicultural in the process. Carroll was at the school for 11 years and arrived at St. Louis in 1997.

Carroll said during her time in Pittsford, she also has worked to upgrade the school’s technology so that it is top of the line. She credits the school’s strong fundraising efforts for enabling officials to outfit the school with such technology.

"Everything is pretty clear and set for the next person coming in," Carroll said.

Although she is retiring, she remains a strong advocate for Catholic schools, saying she believes they are an important mission of the diocese.

"Why go to Catholic school here in Pittsford, where the (public) education is top-notch?" Carroll said. "You need that choice. You need people to have an understanding of your faith."