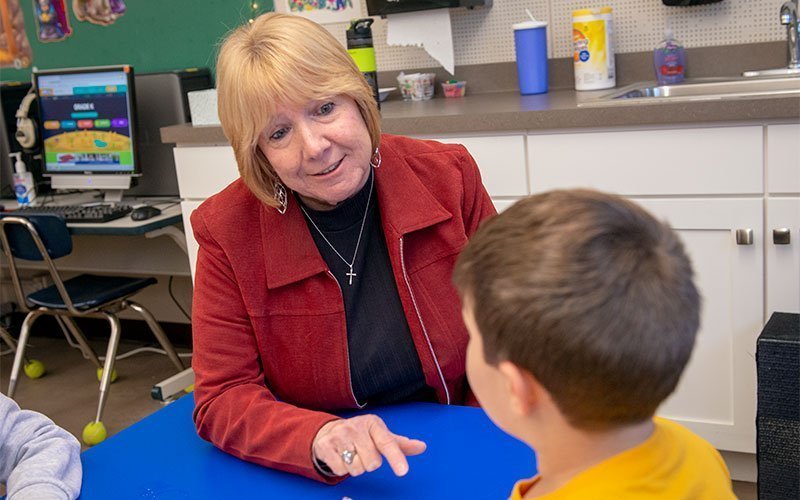 Mary Ellen Wagner, principal of Webster’s St. Rita School, was awarded the Lighting the Fire for Catholic Education Award for her expertise and longevity in Catholic education. (Courier photo by Jeff Witherow)

In her four decades as an educator and administrator of Catholic schools in Rochester, Mary Ellen Wagner, principal of Webster’s St. Rita School, said she never had to use the word “work” to describe what she does every day.

“I have been blessed by God to be a part of the Catholic-sc0hool ministry for so many years,” she said. “It hasn’t ever felt like work.”

Wagner’s steady and strong leadership, along with her expertise and longevity in Catholic education, is why she was “an easy choice” for the Lighting the Fire for Catholic Education Awards, according to James Tauzel, interim diocesan superintendent for Catholic schools. The award is presented annually by the Catholic School Administrators Association of New York State to honor Catholic-school leaders who help promote Catholic education in their own dioceses.

“She is so well-deserving,” Tauzel said. “She is so knowledgeable, so talented and so skilled, but very humble about it. Her dedication over the years and her success at St. Rita School as the principal just made her a good candidate.”

Wagner started her 40-year career in diocesan Catholic schools in 1979 as a teacher at the former Holy Family School in Rochester. She became principal of Holy Family in 2003. When the school closed in 2008, Wagner became principal of the former Nazareth Middle School and Nazareth Academy, until the schools merged with Aquinas Institute in 2010. From there, she served as assistant superintendent for curriculum and instruction in the diocesan Catholic Schools Office before replacing Sister of Mercy Katherine Ann Rappl, who had served as St. Rita’s principal for 30 years.

“St. Rita’s is a very caring, loving and welcoming environment,” said Wagner, who became principal in 2013. “The faculty, staff and retired teacher volunteers are truly dedicated and committed to the mission of Catholic schools. Parents are extremely supportive in all that we do and the children are loving and caring.”

Wagner also served as a past member of an interdiocesean curriculum committee, working with assistant superintendents of all dioceses in New York state on updating and improving subject programs. She also was the New York state representative for the National Catholic Educational Association for three years and served as a chairperson for the diocesan commission of elementary and secondary schools. Wagner has her school administrative certification from the University of Rochester and a master’s degree in special-needs education from SUNY Brockport.

As a graduate of the former Our Lady of Good Counsel School and St. Agnes High School in Rochester, Wagner said she has always been a supporter of Catholic education and continues to promote the benefits of Catholic schools even as the diocesan schools have faced multiple configurations and closings.

“Catholic education has played a special part in my life,” Wagner remarked. “Being in a school environment in which I can live my Catholic faith as well as share it with others has meant so much to me. It is my sincere hope that families continue to recognize the importance and benefit of our Catholic schools.”