Principal said Seton has treated him like family - Catholic Courier 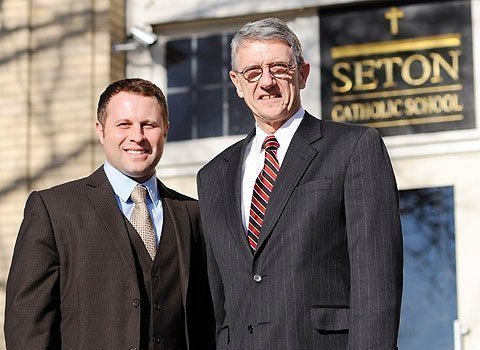 BRIGHTON — As he looked back on 45 years in the education field, Martin Swenson said he closed out that career in a school that treated him, like everyone else, as family.

When trying to describe the unique atmosphere of Seton Catholic School, he cited the example of one family who took it upon themselves to buy a Christmas tree and presents for a student who had suffered a family tragedy.

As he told the story, he paused and his eyes welled.

"There’s a feeling here about this community that is so unique, that binds everybody together: that bond of faith and generous caring love for one another," he said.

In January, Swenson, 67, retired as principal at Seton Catholic School. He was succeeded by Anthony Cook III of Rochester.

The couple retired to Rochester, where Joanne’s family was located. In fact, her uncle was Father Leo Mooney, who was the former managing editor of the Catholic Courier and Journal in the 1930s and ’40s.

Although the aim was to have a seamless transition so parents and children don’t notice the switch to parish operation, Swenson said the change has had many positive aspects for the school.

"We’re much more connected to activities within the parish and the parish with us," he noted.

Swenson said although he is retiring, he will continue to be active as the executive director of the school’s fundraising organization, the Seton Foundation, which was started in the 2009-10 school year.

"We weren’t sure what the next step would be, but the parents realized that we would need to raise funds going forward," Swenson said.

He said he has found it important to partner with parents who are seeking the best environment to educate and develop the character of their children.

"I think one of the most important things that one can do as a principal is to be able to listen to parents, staff and kids to hear what they have to say," Swenson said.

Upon retiring, Swenson plans to spend more time with family and four grandchildren who live in Maine and North Carolina and also is looking forward to traveling, reading and staying active through sports.

He said he is leaving Seton in capable hands.

"Anthony to us represents that next generation: the new generation of Catholic-school leaders who is young and dedicated and highly qualified," Swenson said. "I think that’s what our faith needs and what our school needs for the future."

Cook, 31, is the eldest of four siblings. He is a 1999 graduate of Aquinas Institute, where he played football, track and was captain of the tennis team. He earned a bachelor’s degree in education from SUNY Geneseo in 2005.

He then returned to his alma mater, where he has taught an array of social studies and criminal justice classes. For the last four years, he also has served as dean of students in the Aquinas junior high school, whose enrollment has grown from 189 to 250 since the school was founded in the fall of 2008. In 2010, Cook graduated from the University of Notre Dame with a master’s degree in educational administration through a Catholic school leadership development program.

"Going through that (program) I kind of realized that this is truly what I wanted to do," he said.

Cook also has coached football for nine years, and since 2005 has served as head indoor and outdoor track coach at Aquinas for both the boys’ and girls’ teams. Recently he has been the announcer for basketball games at the school.

Although he’s excited about his new position, he said leaving Aquinas has been difficult.

"That has been the hardest part about leaving is you develop so many relationships with people," Cook remarked.

Yet he said he immediately felt welcomed at Seton and by Swenson, who he said was very kind and welcoming.

"It will be very difficult to replace him, and I’m glad to have him as a resource going forward," Cook said.