Principal with 'heart the size of Texas' retires - Catholic Courier 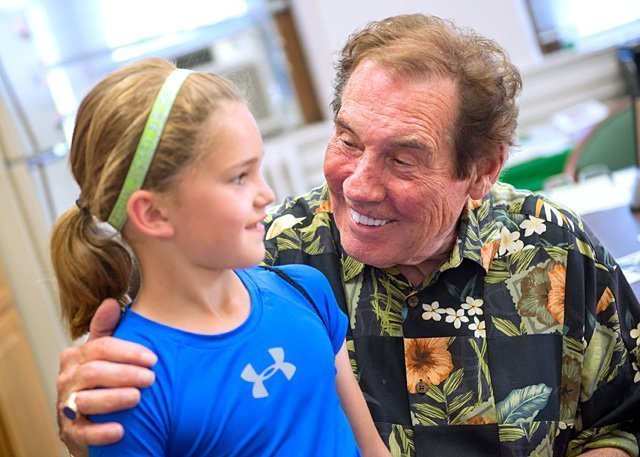 AVON — On June 21, the day before St. Agnes School’s 2015-16 school year ended, a steady stream of students and parents entered the office of Dr. Gerald Benjamin to bid him farewell. Time and again, the encounters were marked by tears, long hugs and quiet exchanges of "I love you."

Nichole Caiazzo, whose daughters, Olivia and Elizabeth, attend St. Agnes, offered a simple explanation as to why emotions were running so high regarding Benjamin.

"He has a heart the size of Texas," she stated. "He’s so giving of his time and efforts."

For the past 19 years Benjamin has sunk a considerable portion of that oversized heart into his duties as St. Agnes’ principal, a position from which he retired July 29. The school’s new principal is Elizabeth Jensen, a former Rochester charter-school teacher and leader.

Benjamin’s tenure at St. Agnes marked the only time he worked for a Catholic institution during his 57-year career in education. Yet he made the place his passion, thriving on his connections with students, staff and parents.

"It’s the community — the love, the respect, the gentleness of the place. Here I was really able to express ‘What would Jesus do?’" said Benjamin, who will celebrate his 79th birthday Aug. 29.

The man affectionately known as "Dr. Ben" has symbolized love, respect and gentleness via his well-known ritual of standing in front of St. Agnes’ entrance each school morning in all kinds of weather, greeting students with hugs and encouraging words as they arrived.

In addition to his personal touch, Benjamin’s time at the school has been marked by key additions to the curriculum. He established scholarship and summer-education programs for St. Agnes, and oversaw additions and improvements in such areas as Spanish, technology, art and reading.

Benjamin also has brought a variety of cultural events to the school, particularly concerts that were open to the public as well. Under his guidance, St. Agnes has organized an annual Sept. 11 remembrance that includes several veterans’ groups and other civic organizations. Benjamin has been presented with awards from such groups as the American Legion, Genesee Valley Council of the Arts, New York state and Rotary International.

"Gerry is an absolute treasure, not only to St. Agnes but Livingston County. The events and culture he brings to that school and (St. Agnes) parish are indescribable," said Anthony S. Cook III, diocesan superintendent of schools, in a February 2016 Catholic Courier feature.

A native of Springfield, Mass., Benjamin obtained his bachelor’s degree from American International College, master’s from Tufts University, and doctorate in special education and curriculum development/administration from Syracuse University.

"Children I’ve had (as a past principal) now have children who come here (to St. Agnes)," Benjamin said, noting that the Staley children’s mother, Mary Catherine Calabrese, was an elementary-school student in Geneseo while he was working there.

He noted that he was strongly considering retirement in 1997 when he became aware of the open principal’s position at St. Agnes. Nearly two decades later, Benjamin is finally getting around to being retired.

A community open house was held in Benjamin’s honor July 17 at the Riviera Theater in Geneseo. Looking ahead, the Geneseo resident hopes to immerse himself in some sort of Catholic ministry such as teaching English to refugees.

And, he plans to keep in touch with the many St. Agnes families he’s gotten to know — folks whom he lauded for their many efforts, along with his own, toward ensuring the small-town school’s survival.

"This has just become my family," he said.