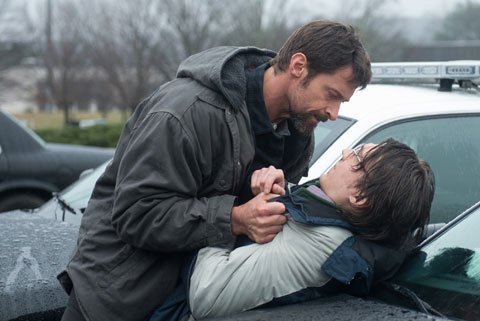 NEW YORK (CNS) — Any film that begins with a character earnestly reciting the Our Father is well calculated to grab the attention of Christian viewers. And, in the case of the powerful drama "Prisoners" (Warner Bros.), such concentration on the part of believers will be, in some respects at least, well rewarded by what follows.

Yet, for all its thematic and symbolic richness, this foray into psychological darkness is too bleak to pass for casual fare. Weighty but wrenching, it can only be endorsed for older moviegoers of considerable fortitude.

His commitment to such ethics is put to the test, however, by a horrifying scenario: On a rainy Thanksgiving Day, Keller’s 6-year-old daughter Anna disappears, together with one of her playmates. It soon becomes apparent that the girls have been kidnapped, and suspicion focuses on mentally challenged local loner Alex Jones (Paul Dano).

Though the lead investigator on the case, Detective Loki (Jake Gyllenhaal), takes Jones in for questioning, the evidence against him is insufficient to press charges. Outraged by Jones’ release, and desperate to locate Anna, Keller turns vicious vigilante. He abducts Jones at gunpoint and holds him prisoner while trying to beat information out of him.

Though it presents the facade of a thriller, director Denis Villeneuve’s film is primarily an exploration of the human condition, including the chain reaction by which sin begets sin, as well as of the role of religious faith in a fallen world.

Keller is never identified with a particular denomination, and the question of his specific beliefs is muddled by the fact that his devotions include both Catholic and Protestant prayers. But he is a test case for faith under fire and an illustration of the dangers involved in any attempt to make the ends justify the means.

Screenwriter Aaron Guzikowski’s script is unflinching in its portrayal of the increasingly brutal measures to which Keller is driven. Add to that such seamy details as an incidental priest figure who is both a sex offender and an alcoholic, and it becomes clear that "Prisoners" requires of its audience not only a capacity for grim material but mature interpretive skills as well.

The film contains harrowing violence, including beatings, torture and a gory suicide, mature themes, a negative treatment of Catholic clergy, at least one use of profanity and constant rough and crude language. The Catholic News Service classification is L — limited adult audience, films whose problematic content many adults would find troubling. The Motion Picture Association of America rating is R — restricted. Under 17 requires accompanying parent or adult guardian.