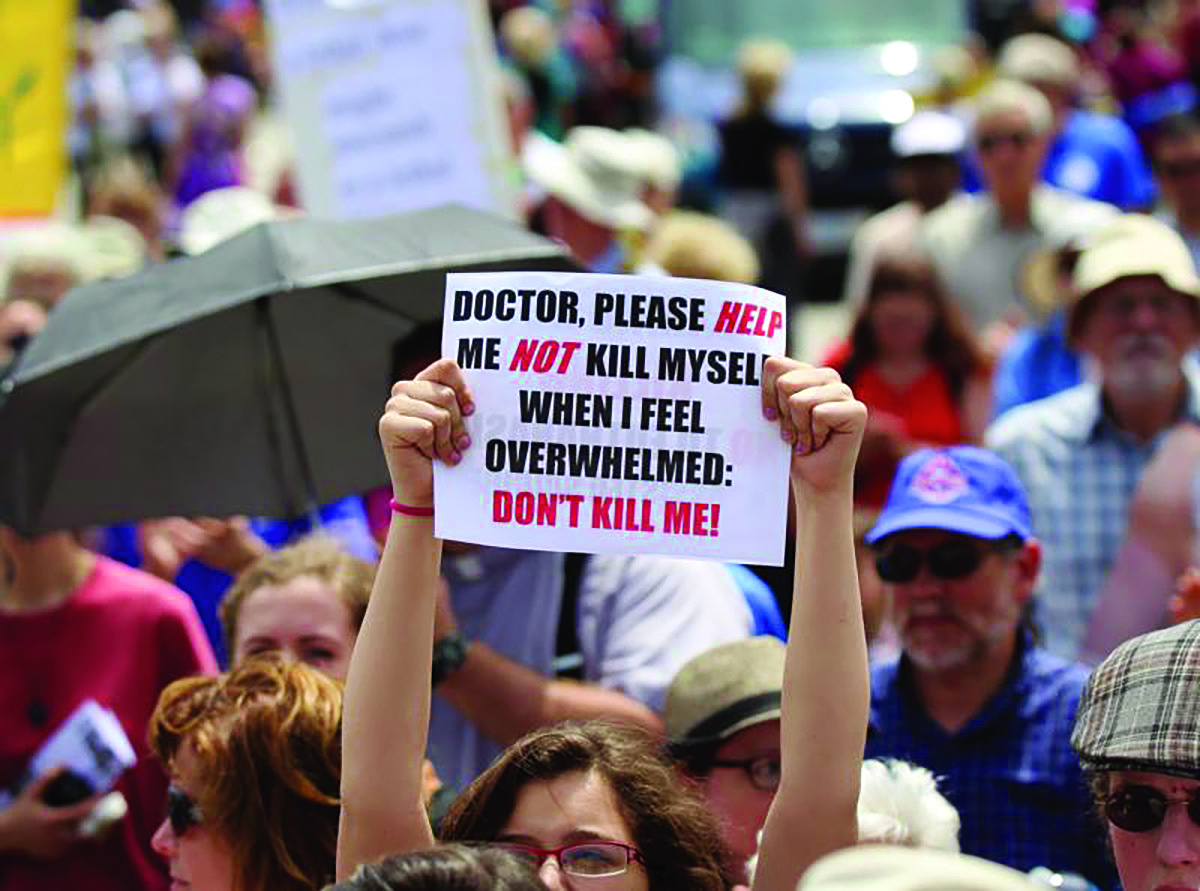 A woman holds up a sign during a rally against assisted suicide in 2016 on Parliament Hill in Ottawa, Ontario. (CNS phto by Art Babych)

GATES — A bill allowing patients to request and use medication for aid in dying could become legal when the New York State Legislature reconvenes in January.

“We are very concerned that this is something that will not only be considered, but potentially passed in the coming legislative session,” said Shannon Kilbridge, who directs the Diocese of Rochester’s Office of Life Issues.

If passed, the Medical Aid in Dying Act would reverse the state’s longstanding ban on assisted suicide and allow a physician to prescribe lethal doses of medication for the purpose of ending a person’s life. At least 29 states have considered legalizing physician-assisted suicide, but the life-ending act is currently only legal in nine U.S. states and the District of Columbia.

The New York State Catholic Conference opposes the bill, noting that Catholic teaching holds that assisted suicide is immoral, both for the patient and the person who assists, and also violates the sacred value of human life. The Catholic conference points out that the bill lacks provisions requiring psychological screenings and other important safeguards, making abuse of the law a serious threat. The Center for Disability Rights, which also is against the proposed legislation, says the bill discriminates against people with disabilities, given that patients with terminal illnesses often become disabled as their diseases advance. Opponents also claim the legislation sends a message that suicide is acceptable.

“We are very concerned that we would be creating an entirely new, acceptable category of suicide that is somehow going to be communicated to everyone in our communities that sometimes it is acceptable to commit suicide,” Kilbridge said. She noted that in Oregon, where the Death with Dignity Act took effect in 1997, the state’s suicide rate increased 49 percent between 1999 and 2010. As of 2012, the suicide rate in that state was higher than the national average even though the statistic does not include aid in dying cases, which Oregon law forbids to be counted as suicides.

With proponents of physician-assisted suicide increasing pressure on the Legislature to pass the bill, Kilbridge plans a lot of educational activity on the issue. She said her office plans to disseminate information to the faithful through parish pastoral councils, social-ministry committees and pastoral associates, underscoring the very real possibility of this bill’s passage while promoting options of palliative medicine and hospice care.

“We have wonderful hospice and palliative care locations across our diocese,” said Kilbridge, noting such facilities as Patrick Place, a comfort-care home in southwest Monroe County. “They can help with not only managing the pain (at the end of life), but also supporting the individual, caretaker and family.”

In addition to the efforts from the life-issues office, Kilbridge noted that the Diocesan Public Policy Committee has named physician-assisted suicide as its top advocacy issue for 2019-20. Catholics across the diocese will be asked to sign petitions against the proposed legislation during Public Policy Weekend in February.