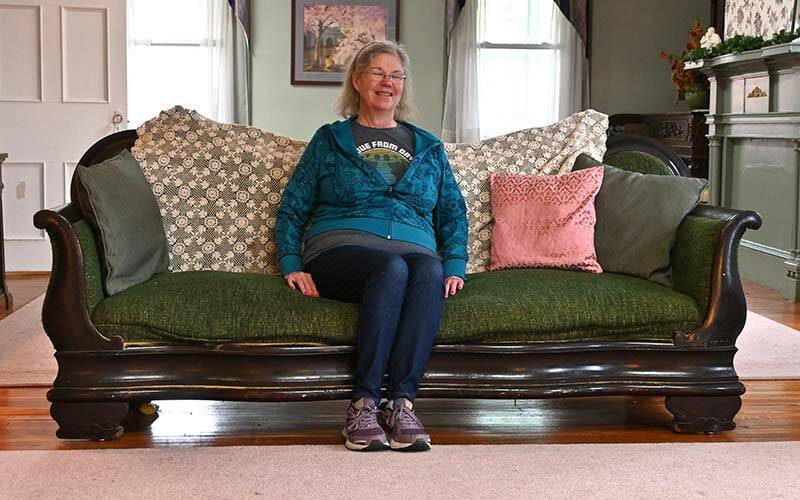 Sue Ann Fisher, who facilitates Family Hope Center's Stronger Together Moms Group in Ovid, is seen Sept. 20 in the building on the grounds of Ovid's Holy Cross Church where the group meets. (Photo by Glenn Gaston)

It’s not uncommon to find a handful children playing on the large lawn next to Holy Cross Church in Ovid. The mothers of these children belong to the Stronger Together Moms Group, which meets weekly at the house on the church grounds and is facilitated by the Family Hope Center, a pregnancy care center based in Geneva.

“Moms come in for an hour or so with their kids, and they just visit, and their kids play and we have a conversation with them,” explained Doreen Teed, executive director of the pregnancy care center.

The Family Hope Center, which provides alternatives to abortion to women and their families, began offering limited services in Ovid in 2019, using space on the grounds of Holy Cross Church as a satellite office of sorts. This arrangement grew out of the desire of the center’s staff to better serve women and families in more rural parts of the region, Teed explained.

“In Seneca County down where Ovid and Interlaken is … there are not a lot of services offered, and so I thought that would be a good place to open a center. I just started scouting around and seeing if there would be a need for it. In the past, I had looked at statistics and had seen for that area, the ratio of live births to pregnancies was not good,” she said.

After determining there was a need for the Family Hope Center’s services in southern Seneca County, Teed worked to secure a suitable location. She soon received permission to use space inside the house on the campus of Holy Cross Church, which is part of the Parish of Mary, Mother of Mercy. For several months, Family Hope Center’s staff and volunteers used the space to offer free pregnancy tests and parenting classes.

The center stopped offering these services in March 2020 when COVID-19 reached the region. When the center reopened several months later, it again offered pregnancy tests and parenting classes at its Ovid location for a short time before staff and volunteer shortages forced it to curtail those services once again, Teed said. During the summer of 2021, however, the center began offering its Stronger Together Moms Group at the Ovid facility, as well as as groups for pre-teen and teen girls.

“Those have taken off. We would eventually love to do parenting classes and pregnancy tests again, but I don’t have enough staff right now, so basically right now we’re doing a moms group and two girls groups,” Teed said.

The Stronger Together groups in both Ovid and Geneva are growing, she added.

“They say that it just gives them a sense of support and community. They love to just get together with other moms, and they like to be able to have their children play,” she said. “It just seems to fill an emotional need and (provide) a sense of community.”

The Family Hope Center also provides free diapers to mothers who participate in either the Stronger Together group in Ovid or its sister group in Geneva. And those who work with the center’s staff or volunteers to complete the online parenting or pregnancy classes offered at the Geneva facility can earn points to redeem for such material aid as baby clothes, wipes or baby shampoo, Teed said.

“We go through a streaming platform that’s designed classes for pregnancy centers. I think online right now they have about 250 classes, but that is pregnancy classes, parenting classes, father classes, Bible studies. It’s a big range of classes,” she added.

The girls who participate in the Courageous Beauty groups in both Ovid and Geneva, meanwhile, discuss a wide variety of topics at their weekly meetings, including self-worth and healthy relationships. Girls between the ages of 9 and 13 meet for an hour each week and share discussion and a snack, while girls who are 14 and older meet for two hours each week over dinner.

The Geneva-based Courageous Beauty group was founded about six years ago after the Family Hope Center’s staff and volunteers noticed an increase in the number of teenage girls coming into the center seeking pregnancy tests.

“We knew that by the time we were seeing them it was too late. We wanted to be an influence earlier, with the hope that they would not need those unplanned pregnancy tests,” Teed said.

The Courageous Beauty groups have proven to be useful even for girls who are not necessarily at risk of becoming pregnant, especially as the culture has become increasingly sexually oriented, she added.