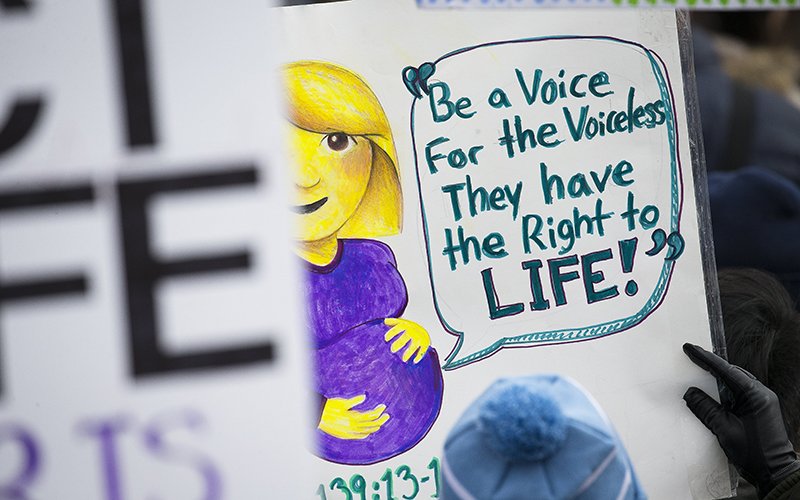 A pro-life sign is displayed during the 2019 annual March for Life rally in Washington Jan. 18, 2019. (CNS photo by Tyler Orsburn)

FREDERICKSBURG, Va. (CNS) — Middle and high school students across the United States are invited to submit an essay sharing their thoughts on protecting the sanctity of human life for the 2022 Pro-Life Essay Contest sponsored by American Life League’s Culture of Life Studies Program.

Co-sponsored by the Institute for Excellence in Writing, the essay contest has categories for fifth grade through eighth grade and ninth grade through 12th grade. A writing prompt is given for each category along with other guidelines for the contest at www.prolifeessay.com. Essays are due by midnight Nov. 7.

The pro-life essay contest was launched soon after a group of home-school moms and educators, including American Life League president Judie Brown, founded the Culture of Life Studies Program in 2014.

Last held in 2019, the contest was reinstated this year following the U.S. Supreme Court’s June 24 ruling in Dobbs v. Jackson Women’s Health Organization that overturned Roe v. Wade, returning the issue of abortion to the states.

The Dobbs case was a challenge to a Mississippi law banning abortion after 15 weeks. The court affirmed the law 6-3 but also voted 5-4 to overturn Roe as well as 1992’s Casey v. Planned Parenthood ruling, which affirmed Roe.

“We have read many amazing essays over the years, which have helped us gear our lessons and social media posts to help students and parents understand the sanctity of life, the value of all human beings, and the importance of treating others with respect,” said Susan Ciancio, executive editor of the Culture of Life Studies Program.

“These essays not only help us sustain the moral courage to stand up for our beliefs, but they encourage other young people to speak up as well,” she said in a statement accompanying an announcement on the contest.

Despite the Supreme Court’s reversal of Roe, abortion remains legal in many states, Ciancio noted, pointing out that some governors have erected billboards urging women to come to their states for abortions.

“Kids are bombarded by lies about how women ‘need’ abortions or those facing ectopic pregnancies will not receive treatment,” she added. “It’s our job as educators and parents to not only teach them the truth, but to teach them to proudly stand up for that truth. That’s why it is so important to encourage students to articulate their thoughts and learn to defend pro-life principles.”

In the 2019 contest, a first-place winner in the fifth- and sixth-grade category wrote: “If the mother does not feel supported, intense fear and anxiety may make her think she has no other choice but to abort. The mother might mistakenly think that, after an abortion, she will feel free again.”

In the 2018 contest, a young woman wrote her essay about suffering, saying “When we say yes to a cross, Jesus never makes us carry it alone. He helps us. He makes it lighter. He uses it to sanctify us.”

The Culture of Life Studies Program aims “to build a culture of life, one student at a time, through broad-ranging pro-life curriculum for children in preschool through high school,” according to a news release.

The program’s Catholic, pro-life, home and classroom materials, resources, and training are available for educators, schools, dioceses and families. The website is cultureoflifestudies.com.