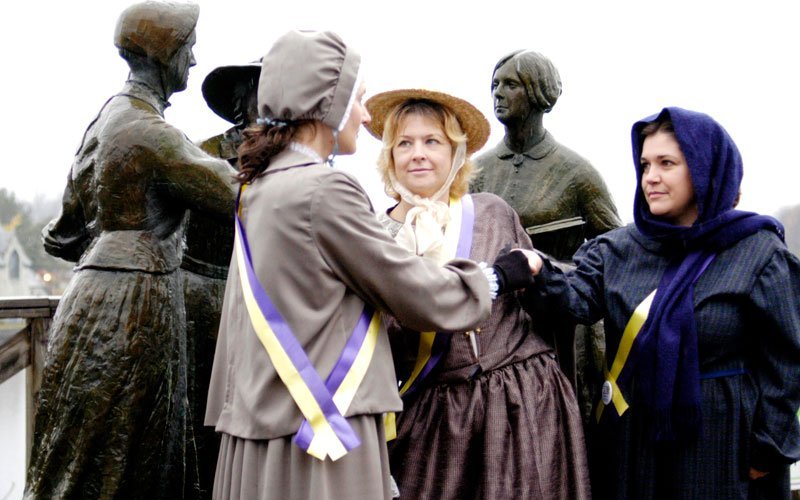 SENECA FALLS — Feminists do not universally support abortion. That’s the message more than 100 pro-life feminists hoped to spread Nov. 8, when they gathered for a pro-life forum. Feminists Choosing Life of New York sponsored the forum to counter the pro-choice National Organization of Women of New York State’s annual meeting, which also was being held in Seneca Falls that day.

“Today we are hoping to get the word out that there are women who believe in women’s rights and do not believe in abortion. They believe in families,” said pro-life feminist Jennifer Fanning of Waterloo.

Seneca Falls was the site of the first women’s rights convention in 1848 and was home to such well-known early feminists as Elizabeth Cady Stanton and Amelia Bloomer. These feminists were staunchly opposed to abortion, as are many of today’s feminists, said Kathy Peters, one of the forum’s organizers and a member of St. Mary Parish in Waterloo.

Despite a steady downpour, more than 100 people gathered for the forum, which began at the “When (Susan B.) Anthony Met Stanton” statue on East Bayard Street. Men, women and children crowded underneath two tents to sign a new Declaration of Rights for Women and Children, which Feminists Choosing Life of New York President Kelly Brunacini drew up to commemorate the 160th anniversary of the Declaration of Sentiments, which was signed at the 1848 women’s rights convention.

“Three generations in my family signed the (new) declaration. I’m so proud of that,” said Our Lady of the Lakes Catholic Community parishioner Peggy Ruscio, who was at the forum with her daughter, Carolyn Ruscio; her granddaughter, 17-year-old Erica Ruscio; and Erica’s 16-year-old friend, Dana McLaughlin.

After the signing, three feminists in period attire staged a re-enactment of the 1851 meeting of Stanton and Anthony, who were introduced by Bloomer. Fanning, Michelle Carmen and Kimberly Burke said they were happy to portray Anthony, Stanton and Bloomer, respectively, because the re-enactors are all staunchly opposed to abortion.

“It’s just ingrained in me as part of the Catholic faith,” said Burke, who belongs to St. Patrick Parish in Seneca Falls. Burke said her seven years working as a pediatric-hospice nurse also helped shape her pro-life stance.

“When you see life at both ends you realize how precious it is,” she said.

Most people don’t seem to realize feminists can be pro-life, Burke added. When she told her friends she was participating in a feminist forum, they said they were confused because they thought she was pro-life.

“I’m not religious but I am a child of rape, so that makes it (being pro-life) even more important to me,” Kohl said.

It’s hypocritical for feminists to assert their own independence and worth while at the same time denying their unborn babies’ worth, she added.

“Historically women were seen as property of men, so I can’t see why women think our babies are our property,” Kohl remarked.

After the re-enactment many of the participants boarded a purple and green trolley while others piled into their own vehicles, and they traveled around the corner to the Seneca Falls Library as one slow-moving yet enthusiastic, horn-honking caravan. Inside the library participants regrouped for the forum portion of the event, where interest was high due to the results of the presidential election six days earlier.

“Our president-elect, Barack Obama, has promised that one of his first acts as president is to ensure the passage of the Freedom of Choice Act,” said Wendy McVeigh, vice president of Feminists Choosing Life of New York.

Passage of this act, she said, would force all Americans to subsidize abortions through their tax dollars, remove the conscience protections currently granted to health-care professionals and pharmacists, end parental notification for minors seeking abortion, and invalidate a host of other state regulations and controls on abortion. She noted that anyone opposed to this legislation should visit www.stopfocanow.org.

“More than ever, pro-life feminists need their voices to be heard for an entire class of human beings who do not have voices of their own. Let’s send a message from Washington from the grassroots up that this will not be tolerated,” McVeigh said.

That sentiment was echoed by Susan Wills, associate director for education of the U.S. Conference of Catholic Bishops’ Secretariat for Pro-Life Activities. She spoke more about the political ramifications of the recent presidential and state elections and about the history of the women’s rights movement, which she said is being distorted by the National Organization of Women. Suzanne Schnittman, a local professor of women’s history, also gave a presentation from the point of view of Stanton’s daughter, Harriot Stanton Blatch.

Not everyone at the forum shared the speakers’ views. New York City resident Kate Lynch, who is pro-choice, said she attended the forum to try to see this important issue from another point of view.

“I think we have to look for common ground on this issue and stop allowing politicians to use it for their own ends,” Lynch said. “We need to look at what we have in common, not what separates us.”