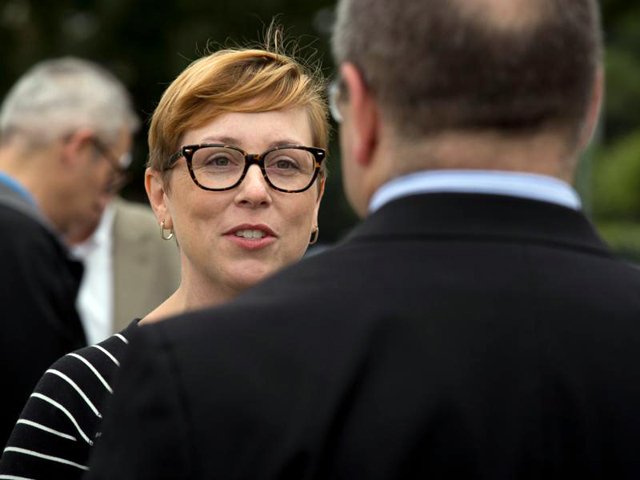 Tina Whittington, executive vice president of Students for Life of America, is seen in front of the U.S. Supreme Court in Washington Sept. 28.
By Rhina Guidos
Catholic News Service
WASHINGTON (CNS) — A group of pro-life advocates from around the country gathered Sept. 28 in front of the steps of Supreme Court of the United States to announce the start of a national bus tour to rally others to support their cause.
The organization 40 Days for Life said its supporters will join them in prayer, but also on the road, as they travel to 50 states over 40 days to fast, host vigils and rallies, not just focusing on ending abortion but also on how the upcoming election will affect their cause.
"Together we are going to make abortion history," said Tina Whittington, executive vice president of Students for Life of America, based in Fredericksburg, Virginia. "We now need to keep pressing on."
Others urged supporters to register to vote, to find out how their local candidates for office stand on the abortion issue and to go to the polls in 40 days.
During a rainy news conference, Georgette Forney, of Anglicans for Life and the Silent No More Awareness Campaign, invited others to join the rallies and events that will take place in locations as small as Bellevue, Nebraska, and as big as New York City.
David Bereit, CEO of 40 Days for Life, said cities were chosen depending on strategic concentration, such as central locations that would be easy for others to get to, and events in some venues, such as Texas and California, will provide assistance in Spanish.
Bereit said the 40 Days for Life organization began as a small local movement to pray and fast as people of faith seeking an end to abortion and now 636 cities have held events. These fall days leading up to the election are important ones because the decision made at the ballot box will affect not just years but decades to come, he said, referencing the vacancy left at the Supreme Court with the February death of Justice Antonin Scalia, who could always be counted on to oppose abortion in major court cases.
"We recognized as a team … that we were in an important season for America, this fall 2016," Bereit said. "We had to do more than we had in the past."
That’s why a major tour to reach out to as many people as possible seemed necessary, he said.
But he said the group also realizes the greatest solutions are not going to come from justices who sit in the Supreme Court or from the White House or from the U.S. Congress or from state legislators. Whittington said what needs to change the most is the way others view abortion, and her organization works to make abortion "unthinkable," and aims for a "real culture change," she said.
40 Days for Life was joined on the court steps by representatives of March for Life, the Susan B. Anthony List as well as Heartbeat International.
– – –
Follow Guidos on Twitter: @CNS_Rhina.
Copyright © 2022 Catholic News Service, Inc. All rights reserved. Linking is encouraged, but republishing or redistributing, including by framing or similar means, without the publisher's prior written permission is prohibited.