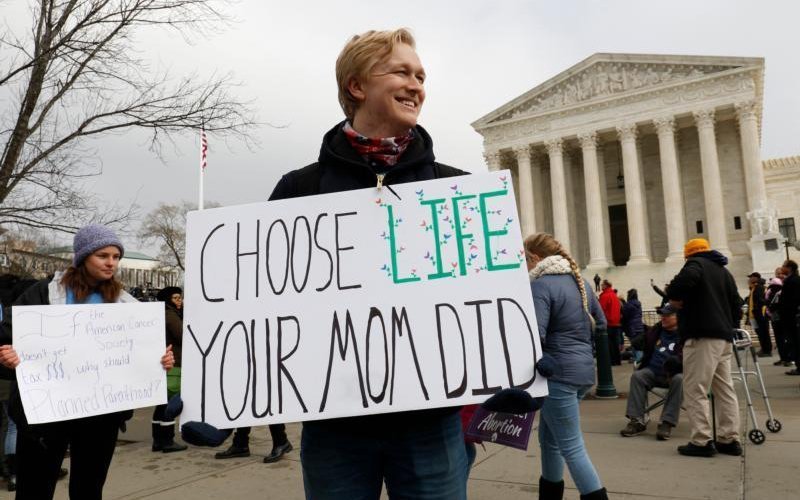 Austin Jennings, a member of the Students for Life at the University of Mary Washington in Fredericksburg, Va., joins pro-life advocates in front of the Supreme Court during the March for Life Jan. 18, 2019. (CNS photo by Gregory A. Shemitz)

WASHINGTON (CNS) — The Trump administration Feb. 22 finalized its “Protect Life Rule” preventing funds appropriated under the Title X Family Planning Program from being used in services that include abortion as a method of family planning or that make abortion referrals.

It bars Title X grant money from any clinic that performs abortion, which will especially impact Planned Parenthood, the nation’s largest abortion provider. According to the organization’s website, Planned Parenthood affiliates receive roughly $290 million in Title X funds and serve about 41 percent of those who benefit from Title X funding.

“The Title X Program can now finally return to its originally intended purpose — the provision of family planning services, not abortions,” said Rep. Chris Smith, R-New Jersey, who is chair of the Congressional Pro Life Caucus.

“Title X funding was never intended to facilitate Planned Parenthood’s hideous dismemberment, chemical poisoning or deliberate starvation and forced expulsion of a defenseless unborn baby,” he said in a statement. He applauded the Trump administration for affirming “human life and dignity with this pro-child rule.”

The Office of Population Affairs, which is part of the U.S. Department of Health and Human Services and oversees Title X, published the draft final rule the afternoon of Feb. 22. It is slated to go into effect 60 days after it is published in the Federal Register.

In May 2018, President Donald Trump said his administration would reinstate Reagan-era regulations to prevent funds appropriated under Title X from being used in programs that include abortion as a method of family planning or that make abortion referrals.

The restrictions were put in place in 1988 by President Ronald Reagan. Planned Parenthood of New York City immediately challenged the rules, claiming the denial of public funds violated their constitutional rights of free speech because the rules included a prohibition on abortion referrals.

In 1991, the U.S. Supreme Court ruled 5-4 the government had the right to establish rules that fund only family planning programs that do not “encourage, promote or advocate abortion.” When President Bill Clinton took office in 1993, he reversed the regulations.

According to the Office of Population Affairs, what the Trump administration is calling the “Protect Life Rule” is based on the most accurate interpretation of the Family Planning Services and Population Research Act of 1970, which enacted Title X. Section 1008 of this act states that “none of the funds appropriated under this title shall be used in programs where abortion is a method of family planning.”

Dr. Leana Wen, Planned Parenthood’s president, said in a statement that the organization would fight the rule “through every avenue.”

In reacting to the announcement on the Protect Life Rule being finalized, Kristan Hawkins, president of Students for Life of America, said that over 1,220 of the organization’s groups around the country “had worked tirelessly” in support of the revision to Title X.

“We are celebrating the newly finalized Title X rules that will redirect some taxpayer resources away from abortion vendors like Planned Parenthood, making more than half-a-billion from us all,” she said. “This is a life-saving policy change, as abortion vendors have used these family planning resources to underwrite their deadly enterprise.”

She urged defunding of every program promoted by a “radicalized abortion industry,” which shows “blatant support for virtual infanticide in late-term abortions.”

“This is the kind of policy change that millennials, the nation’s largest voting bloc, support,” she added. “Health care dollars should fund real, full-service medical care, not abortion vendors.”

According to HHS, the Protect Life Rule requires “clear financial and physical separation between Title X funded projects and programs or facilities where abortion is a method of family planning. This separation will ensure adherence to statutory restrictions, and provide needed clarity for the public and for Title X clinics about permissible and impermissible activities for Title X projects.”

The new rule specifically prohibits “referral for abortion as a method of family planning,” but does not bar “nondirective counseling on abortion.” It also eliminates a “requirement that Title X providers offer abortion counseling and referral.”

“Americans United for Life is pleased that HHS has taken steps to stop Title X funds from subsidizing abortion,” said Catherine Glenn Foster, president and CEO of Americans United for Life. “It is AUL’s longtime policy position that funds appropriated or controlled by the federal and state governments should be allocated away from the subsidization of elective abortion providers and toward comprehensive and preventive women’s health care.”