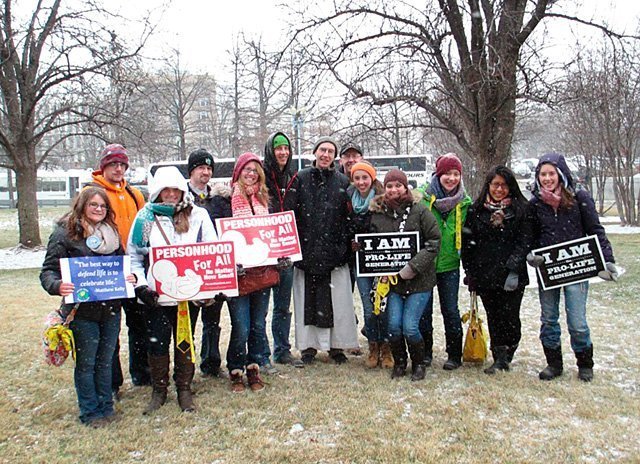 Father Isaac Slater (center), prior of the Abbey of the Genesee, met up with SUNY Geneseo Newman Community members at the 2013 March for Life.

For young adults such as Abby Cantello and Ali Barger, classrooms aren’t the collegiate settings for embracing subjects of great interest.

Thanks to their attachment to Catholic campus ministry, Cantello and Barger — along with many of their peers — have been active in several pro-life causes as well.

In the past two years, Cantello — a senior at SUNY Geneseo — has attended the March for Life in Washington, D.C.; taken part in "Life Chain," another national anti-abortion initiative; and made efforts to develop a pro-life interfaith coalition on campus. She told the Catholic Courier that her activism is rooted in "the importance of having dignity for all forms of life from conception to natural death" — the basis for the consistent ethic of life.

"All of the pro-life ideas just make sense to me. I truly believe that every single human being, regardless of the stage of development that they are in, deserves to be treated with the utmost respect and with lots of love," said Cantello, who will turn 20 in October.

Cantello has not been alone in her dedication. Mike Sauter, Catholic campus minister at SUNY Geneseo, noted that the Newman Community there plans annual pilgrimages to the March for Life and several students volunteer at pregnancy-outreach centers both locally and in their hometowns.

Meanwhile, Barger helped organize a 2014 March for Life contingent from Cornell University after attending her first march in 2013. She also coordinated many Cornell student volunteers at the Ithaca Birthright, a clinic where pregnant women get confidential help and support.

"I’m so passionate about the pro-life cause because I believe that everyone has a right to life, and that our society needs to do everything we can to restore that right," said Barger, 23, who graduated from the Ivy League school in 2013 and was a graduate intern with Cornell Catholic Community last school year.

Their March for Life experiences, in particular, made Cantello and Barger realize just how many people share their passion.

"Especially in today’s society, where you oftentimes feel alone in your views, it is so uplifting to be in solidarity with hundreds of thousands of Catholics who are also pro-life," said Barger, who arranged the Cornell contingent for the 2014 March for Life with Brandon Pierotti, president of Cornell Coalition for Life, a nondenominational group that advances pro-life priorities.

"It was an amazing experience," recalled Cantello, who attended the March for Life in 2013 and hopes to go again this January with other SUNY Geneseo students. "There were so many people, especially young people, gathered together rallying for the same cause, praying together, and supporting each other."

Of the buses that travel from the Rochester Diocese annually to the March for Life, several have youth and young-adult participants and a couple of buses are reserved exclusively for teens. Linda Mehlenbacher, diocesan coordinator of youth ministry, noted that while several youth groups in the diocese engage in pro-life initiatives, the number can be even greater if they collaborate with parish social ministries.

"If youth ministry is being done correctly, young people should be integrated," Mehlenbacher said. She added that just because pro-life issues are complex, parish adults shouldn’t assume that the subject matter is beyond the interest or grasp of young people.

"We have very, very bright, astute students these days," she stated.

"I think if we keep discussing the value of life in our parishes, the number of young Catholics attending these types events will continue to grow," Barger agreed.

Cantello, for one, had her pro-life interests stoked as a high-schooler. She said she was "extremely inspired" by adults who led her youth group, recalling that they "would stress to us the importance of being actively pro-life."

This requires the willingness to endure opposition, as Cantello was reminded while taking part in Life Chain last fall in Rochester. While displaying anti-abortion signs and praying on the sidewalks near a Planned Parenthood facility "lots of people who drove by beeped, some in support and others in disdain," she said.

Cantello noted that in most of her discussions about life issues, fellow students hear out her opinions although there is the occasional disrespectful comment. "Also, pro-life views are not generally found in secularized science classrooms," she added.

Barger acknowledged that at Cornell "I have encountered a lot of resistance for my views. Being pro-life definitely has a stigma associated with it." She said she deals with it by presenting facts — about the first stages of life, about research revealing the many negative effects women have experienced after having abortions.

Barger, who currently resides in Edina, Minn., said she intends to keep active with pro-life efforts now that she’s out of college; she plans to attend the March for Life this coming January.

As for Cantello, "I plan on continuing to pray and stand up for those who cannot stand up for themselves — for as long as it takes for the government and the overall culture to adopt these ideas and messages."