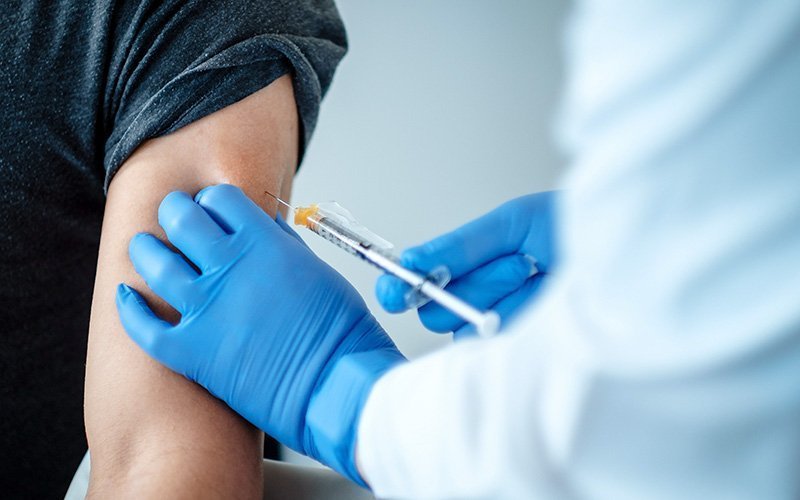 A dose of the COVID-19 vaccination made by Pfizer and BioNTech is administered in this undated handout photo. (CNS photo courtesy of BioNTech SE 2020 handout via Reuters)

Bishops: Use of Pfizer, Moderna COVID-19 vaccines is morally acceptable

However, they called for “assurances of safety, efficacy and a full commitment to uncompromised ethical development” of vaccines by pharmaceutical companies. The four groups expressed concern about the use of “abortion-derived fetal cells” in the development of some vaccines.

The statement follows recent announcements by Pfizer and its German partner, BioNTech, and by Moderna that their respective COVID-19 vaccines are 95% and 94.5% effective against the disease. The vaccines — which are both administered in two shots — are in production but the companies are waiting for the U.S. Food and Drug Administration to review the data and issue a hoped-for emergency use authorization so the vaccines can be widely distributed.

The four physician-led organizations acknowledged in their statement that while “it is true that the animal-phase testing for these vaccines used abortion-derived fetal cells, commendably, it does not appear that production methods utilized such cells,” they said.

But several Catholic leaders, including the chairmen of the U.S. bishops’ doctrine and pro-life committees and an official at the National Catholic Bioethics Center, have said it is not immoral to be vaccinated with them because any connection they have to aborted fetus cell lines is extremely remote. Such cells were used only in a testing phase but not in the production phase.

In the case of AstraZeneca and Oxford University, they are working together to produce a COVID-19 vaccine that is sourced from cell lines that were originally abortion-derived, according to the Lozier Institute, a pro-life organization based in the U.S., which studied a range of vaccines under development.

“Fortunately, there are alternatives that do not violate this basic ethical and moral standard,” said the Catholic Medical Association and the other physician-led groups in their joint statement.

They noted that over the past several decades, many of the more than 50 approved viral vaccines “have not utilized abortion-derived fetal cell lines for their production,” but have been developed with viruses “grown in the laboratory and harvested, then weakened or inactivated to serve as a safe vaccine.”

Others such as the John Paul II Medical Research Institute use umbilical-cord and adult stem cells. “These and other ethical approaches provide encouragement for the future, where no vaccine will violate the dignity of human life in their production,” the groups said.

“It is profoundly important to recognize the vaccines that may have been developed with the use of abortion-derived fetal cell lines,” the physician-led groups said in their Dec. 2 statement. “This awareness is necessary from the perspective of both the health care professional and the patient, and every participant in this process deserves to know the source of the vaccine used to allow them to follow their moral conscience.”

In a Nov. 21 statement, the president and CEO of the Catholic Health Association, Mercy Sister Mary Haddad said CHA ethicists, “in collaboration with other Catholic bioethicists,” have found “find nothing morally prohibitive with the vaccines developed by Pfizer and BioNTech.”

She said they made this determination using the guidelines released by the Vatican’s Pontifical Academy for Life in 2005 and 2017 on the origin of vaccines.

CHA encouraged Catholic health organizations “to distribute the vaccines developed by these companies.”

In a Nov. 23 memo to their brother bishops, Bishop Kevin C. Rhoades of Fort Wayne-South Bend, Indiana, chairman of the U.S. Conference of Catholic Bishops’ Committee on Doctrine, and Archbishop Joseph F. Naumann of Kansas City, Kansas, chairman of the USCCB Committee on Pro-Life Activities, addressed the moral suitability of the Pfizer and Moderna vaccines.

Neither one, they said, “involved the use of cell lines that originated in fetal tissue taken from the body of an aborted baby at any level of design, development or production. They are not completely free from any connection to abortion, however, as both Pfizer and Moderna made use of a tainted cell line for one of the confirmatory lab tests of their products.

“There is thus a connection, but it is relatively remote,” they continued. “Some are asserting that if a vaccine is connected in any way with tainted cell lines, then it is immoral to be vaccinated with them. This is an inaccurate portrayal of Catholic moral teaching.”

Like Bishop Rhoades and Archbishop Naumann, John Brehany, director of institutional relations at the National Catholic Bioethics Center in Philadelphia, said a recent interview on the “Current News” show on NET TV, the cable channel of the Diocese of Brooklyn, New York, that the Moderna and Pfizer vaccines were not themselves produced using cell lines derived from aborted fetal tissue.

On Dec. 3, the California Catholic Conference, the public policy arm of the state’s Catholic bishops, said it “affirms” the Pfizer and Moderna vaccines “are morally acceptable.” It said it is committed to working closely with Catholic health care ministries and Catholic Charities as well as local government and other entities to promote and encourage people get vaccinated and to “advocate on behalf of vulnerable populations to ensure that they have access to safe and effective COVID-19 vaccines.”

The conference also said it would “provide regular and accurate information to parishioners and the community in support of morally acceptable, safe and effective COVID-19 vaccines.”