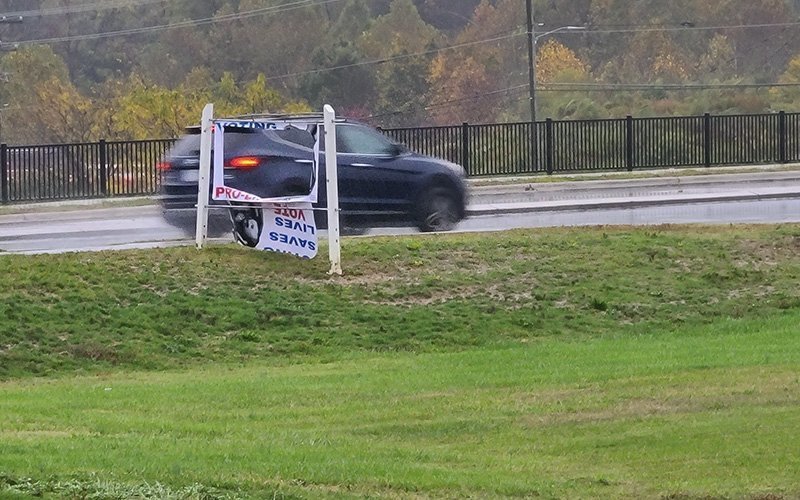 A pro-life sign is seen damaged in front of St. Paul the Apostle Church in Greensboro, N.C., in this undated photo. (CNS photo courtesy Diocese of Charlotte)

CHARLOTTE, N.C. (CNS) — Police were investigating recent thefts of pro-life signs from four parish churches and two schools in the Diocese of Charlotte.

St. Vincent de Paul and St. Ann churches in Charlotte, St. Mark Church in Huntersville and St. Paul the Apostle Church in Greensboro reported that pro-life signs erected for Respect Life Month, observed every October, and the upcoming elections have been stolen or vandalized.

This type of vandalism has been reported elsewhere in the country.

In Louisiana, yard signs and larger banners promoting a pro-life measure on the Nov. 3 ballot in that state were stolen in New Orleans and at least four other cities, reported Louisiana Right to Life. The Love Life Amendment, as its called, proposes to amend the state constitution to say there is no right to abortion or taxpayer funding of abortion.

In Texas in early October, a pro-life display at the University of North Texas was vandalized, according to Texas Right to Life. Pro-life students at the university had permission to place 1,000 flags on campus as a memorial to represent preborn babies killed by abortion.

Dozens of the flags were ripped out of the ground or stolen and had to be replaced. Each flag represented some of the more than 61 million preborn babies killed since the Supreme Court’s 1973 Roe v. Wade decision legalizing abortion nationwide.

In Charlotte, large pro-life banners on display in front of St. Vincent de Paul Church were vandalized three times during October. The signs — urging “Pray Every Day to End Abortion” and “America, Defend Life” — were cut in half. They were later repaired by the church.

One banner with a pro-life message was stolen from outside St. Vincent de Paul Church between Oct. 9 and 10, according to a Charlotte-Mecklenburg Police report.

The remaining banner in front of the Charlotte church has been repaired, after being slashed in half three times, said the parish’s Respect Life coordinators Steve and Gail Barringer.

“We’re not going to let this stop us,” Steve Barringer told the Catholic News Herald, newspaper of the Charlotte Diocese. The pair said they continue to pray for those who have committed these acts and will continue to bear witness for the rights of the unborn.

This is not the first time St. Vincent de Paul Church has been targeted: Other pro-life displays have been damaged or stolen several times over the past few years. Last year, small crosses on display in front of the church were stolen.

At St. Ann Church, similar signs were stolen sometime overnight Oct. 20-21. The parish said it plans to replace the banners.

Pro-life banners at Holy Trinity Middle School were vandalized and then subsequently stolen in separate incidents. The school also plans to replace its banners.

A pro-life sign was stolen from in front of Charlotte Catholic High School sometime between Oct. 16 and 17.

In Greensboro, a pro-life banner in front of St. Paul the Apostle Church was cut apart, Father Joseph Mack, the pastor, reported on the parish’s Facebook page. The parish has repaired the banner and it is back on display. Father Mack commented about the importance of the pro-life message on social media.

In Huntersville, a Respect Life banner stating, “Voting saves lives. Vote pro-life,” was stolen from outside St. Mark Church a few days after it was installed. The theft occurred sometime Oct. 20-21, the parish reported. The banner has since been replaced.

“We were created (this banner) specifically for a time and place such as this one with the current events going on in the world,” said Father Alfonso G√°mez, St. Mark’s parochial vicar. “The Lord has specifically given us the grace of faith, to be able to not only be witnesses and spectators of such sacrileges and difficulties that going on in the world, but that we are called to be, in a certain sense, co-redeemers of this world.”

Father G√°mez asked people to pray for the country “with the turmoil that we face and that for individuals who act out — out of an absence of knowledge and love of God — that they may come to be filled with his grace, and live in that love that the Lord wants for them.”

Jessica Grabowski, the Charlotte Diocese’s Respect Life program director, noted: “We must remember that the fight for life is most importantly a spiritual fight. Although it is unfortunate and inconvenient when things like this happen, it illustrates hope that the Catholic community is making great strides in our steadfast efforts to promote the protection of all human life, from conception to natural death.”

She added, “We must continue to surround all our efforts for life in prayer and through acts of reparation.”

Bender is an online reporter for the Catholic News Herald, newspaper of the Diocese of Charlotte.